Earth’s terrain is ever changing thanks to erosion, but now a technique enables scientists to reconstruct some past landscapes and forecast those of the future. The key is in the geometry of how river boundaries shift over time, suggests the study, which uses a statistical method to assess and describe these changes.

The method, reported today in Science1, estimates whether the edges of a river system’s watershed are stable or whether they are spreading to ‘cannibalize’ neighbouring river basins.

“This is an exciting new way to look at topography and back out its history,” says David Montgomery, a geomorphologist at the University of Washington in Seattle, who was not involved in the study. “[These researchers] have put together the principles for running the film backwards.”

A river’s rate of erosion through a landscape depends on many factors, including the steepness of the terrain, the hardness of underlying rocks and the volume of water the river carries. Given a chance — and enough time — a river and its network of tributaries will grow and spread into a stable configuration, says Sean Willett, a geophysicist at the Swiss Federal Institute of Technology in Zurich, who led the study.

Many other studies of river systems have focused on their vertical behaviour, such as the way rivers carve down through rock. Willett’s technique looks instead at the horizontal movement over time, for example by looking at the way watershed boundaries move. It assumes that neighbouring rivers typically stabilize to reach an equilibrium.

Field geologists have long recognized a few river rules, Willett notes. For example, “rivers don’t like to be long and skinny”, and “little rivers are steep, and big ones are not”. 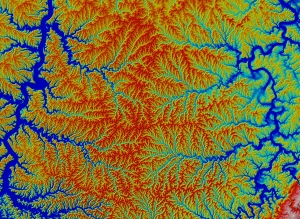 Rivers run by rules which can be incorporated mathematically to reveal their histories and futures.

Willett and his colleagues fed these rules into a statistical model that calculates a value, Χ (the Greek letter chi), at each point on the landscape. By comparing the Χ value near the edge of one river basin (the farthest point upstream) with Χ just on the other side of that boundary (in the neighbouring watershed), researchers can tell whether the border between the two river networks is stable, says Willett. If Χ is similar on each side of the ridge, the boundary is generally stable.

Conversely, if the Χ values are very different at the two sites, the boundary is unstable, and the river systems will shift until they achieve a stable configuration. But in some cases, the growth of one river basin could lead to runaway appropriation of the neighbouring watershed, giving the river more erosive power to sculpt the landscape, says Willett.

The analytical technique “is a great tool for understanding current landscapes in terms of what has happened to them previously,” says Kelin Whipple, a geomorphologist at Arizona State University in Tempe. And because the river systems in many current computer simulations reach stable configurations more quickly than real rivers do (in hundreds of thousands of years rather than millions), the new technique could help to improve those models, he notes.

To test their method, Willett and his colleagues assessed river basins in three widely separated and geologically different regions. In the Loess Plateau of central China, where tectonic activity has been limited for a few hundred million years, river basin boundaries appear to be stable. But along the eastern slopes of the Appalachians, between those ancient peaks and the Atlantic Ocean — which began forming about 200 million years ago when Europe split from North America — river basins still haven’t reached steady configurations.

The situation is even more unsteady in Taiwan, where tectonic activity is lifting the island and steepening the terrain, says Willett. Rates of erosion are high, as typhoon rains batter the island and cause landslides, which can shift the boundaries between watersheds by as much as 12 metres in one fell swoop, he notes.

Besides helping geologists to recognize how landscapes have evolved, the technique could help ecologists to better understand how aquatic species might have spread from one river basin to another in the past, the researchers add.