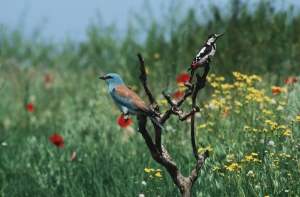 The Map of Life so far includes all terrestrial vertebrates and some fish.

Map of Life — an interactive resource for global biodiversity analysis — launches today, promising a new era in the visualization of species distributions.

On first glance, Map of Life may seem just one more in the dozens of biodiversity databases online, but it has a novel capability — a web-mapping tool that integrates disparate data types, from single-occurrence records in museum collections to expert-derived ranges found in field guides.

Funded in part by the US National Science Foundation, Map of Life will soon allow users to add or update species data, thereby becoming the first two-way portal of biodiversity information.

“Map of Life is more than a sum of its parts; what’s transformational is that these different data types cross-inform each other and help us piece together the most transparent, robust representations of species distribution yet achieved,” says co-creator Walter Jetz, a conservation biologist at Yale University in New Haven, Connecticut.

The tool grew out of Jetz’s own need to combine his data with existing data sets to best understand how bird biodiversity patterns could inform conservation efforts. But stitching together all the records takes up an enormous amount of time. “I remember thinking ‘This is silly. I’m doing this on my own, knowing others are doing it too’,” he says. He and his colleagues decided to share the tools they were developing and make the process dynamic by allowing users to improve the species-distribution data — a vision they articulate in a paper published in Trends in Ecology and Environment1.

The demo release of Map of Life will focus on terrestrial vertebrate and fish species — combining 150 million point-occurrence records from the Global Biodiversity Information Facility (GBIF), an intergovernmental warehouse of digitized species data, expert range maps from the International Union for Conservation of Nature, and regional presence/absence checklists from the World Wildlife Fund, as well as a few individual scientists' databases. The team plans to add data for plants, trees and selected invertebrate groups later this year.

The demo version has two main features. Users can search for a species name to see a map of all the species-distribution records, and can generate a species list of all the animals recorded within 50–1,000 kilometres of a specific spot on the planet.

“There’s no doubt Map of Life is a valuable tool; there’s nothing else out there that allows both researchers and citizen scientists to interact with all these layers of data,” says Terry Erwin, an entomology curator at the Smithsonian Institution in Washington DC.

The larger vision is to combine species data with other types of data — from genomics to environmental variables — to conduct robust analyses of the drivers and impacts of biodiversity shifts over time, says Map of Life co-creator Robert Guralnick, curator of invertebrate zoology at the University of Colorado Museum of Natural History in Boulder.

Map of Life still faces a major hurdle — gaining traction in biodiversity circles. For the site to have widespread utility it will require much more data, but unless users are convinced of the site’s usefulness, they may not take the time to contribute their own data.

“There is a bit of cynicism in the community because everybody knows far too many biodiversity data have been created in different places with different protocols,” says Georgina Mace, a population biologist at Imperial College London and the current chair of the scientific committee of Paris-based DIVERSITAS, an international biodiversity research programme. Mace thinks that Map of Life’s Wikipedia-style approach, allowing the community to improve data, will give users confidence in it. “Having that dynamic upgrading of the database is really important; otherwise it will stagnate and nobody will believe it any more,” she says.

Having some high-profile users already on board — such as the Group on Earth Observations Biodiversity Observation Network, an independent, international science panel that reviews the effects of changes in biodiversity — will also help.

Jetz and Guralnick expect that Map of Life’s visualization capabilities will help efforts to clean up existing species-distribution data; for example, data provided to the GBIF notoriously contains inaccurate species identifications or imprecise geospatial data. Jetz is encouraging users to report any bugs found in the system: “The whole idea only works if scientists are keen to engage and contribute to the effort.”