A leading manufacturer of high-performance lithium-ion batteries for electric vehicles is struggling to make ends meet. Last week, A123 Systems of Waltham, Massachusetts, announced net losses of US$125 million in the first quarter of the year. Its woes are symptomatic of larger problems facing the battery industry.

“The market for electric vehicles hasn’t ramped up as quickly as projected,” says Yet-Ming Chiang, a materials scientist at the Massachusetts Institute of Technology in Cambridge, who co-founded the company in 2001. 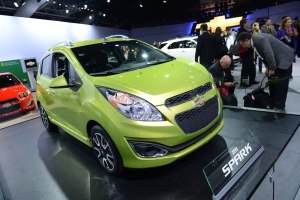 The Chevrolet Spark will be one of the vehicles to use A123 Systems' batteries.

The market's sluggishness is in large part because the batteries are still very expensive. Chiang would not disclose the price of A123’s batteries, but he says that the industry average is US$500–650 per kilowatt-hour of energy stored. The Nissan LEAF electric car uses a 24-kilowatt-hour battery pack, which would cost $12,000 on the low end — about one-third of the car’s selling price, and a lot for consumers to swallow.

A123 Systems has developed technology that was supposed to bring that cost down. The cathode in the company's batteries is made from lithium iron phosphate, which contains relatively inexpensive raw materials.

“When lithium iron phosphate came out everyone was jumping up and down and saying it was going to be cheap,” recalls Jeff Dahn, a battery researcher at Dalhousie University in Halifax, Canada, who helped to pioneer the first lithium-ion batteries.

Yet some outside the company suspect that A123 Systems’ cathodes are more expensive to make than those in other high-performance vehicle batteries. The cathodes are made from nanoparticles, which give them a high surface area, helping the batteries to charge and discharge very quickly and making them the highest-power lithium-ion-battery electrodes on the market. But the cathodes must be made in a controlled environment to keep them free of impurities, whereas other companies’ cathodes are made from monolithic blocks of material that are less prone to contamination, says Dahn. Chiang, however, says that it is a “misconception” that the composition of the cathodes is a liability.

Chiang notes that some of A123 Systems' problems were caused by the challenges of scaling up the manufacturing process rapidly at a new factory. The company’s first-quarter losses were so severe in part because it had to recall and replace battery cells that had been handled by a miscalibrated machine in its Michigan plant. The recall cost the company $55 million, but the problem has now been fixed.

A123 Systems is no minnow, backed by $371 million in its initial public offering in 2009 and a US Department of Energy grant of $249 million to build the Michigan factory, its customers include BMW and General Motors. But it is still struggling to compete with larger firms that have experience with manufacturing. The company has strong technology and expertise in research and development, says Kevin See, an analyst at Lux Research in Boston, but it is up against well established battery makers at big electronics firms. LG Chem of Seoul makes a battery that powers General Motors' Chevrolet Volt; NEC of Tokyo collaborates with Nissan to make batteries for the LEAF; and Panasonic in Kodama, Japan, manufactures batteries for the Toyota Prius.

Ironing out the kinks in large-scale manufacturing will cut costs, but it won’t be enough. “To drive costs down to $300 per kilowatt hour by 2020, you need innovation throughout the battery,” says See — not only in the cathode, but also in the anode and casing.

Dahn notes that there is some low-hanging fruit. The two electrodes in a lithium-ion battery cell must be separated by a polymer film riddled with tiny holes. This film costs $2 per square metre — but before the holes are made, the same material costs just 6 cents. A battery pack for a large car requires hundreds of square metres of film. “There’s got to be a way to get that cost down,” says Dahn.

A more difficult measure is to increase the storage density of the electrodes. Amprius, a start-up based in Sunnyvale, California, and spun out by Yi Cui, a materials scientist at Stanford University, is developing anodes based on nanostructured silicon. Silicon can store ten times as much energy as graphite, the conventional material for anodes in lithium-ion batteries, but it cracks when the battery is operated. Nanostructured silicon anodes can take the strain but are expensive to make. Amprius is currently working out the manufacturing challenges, says Cui.

Chiang says that he and others are working to build energy-storage technologies that will leapfrog today’s batteries. If it can weather its current woes, A123 Systems may be one of the companies providing these technologies; if not, it has plenty of competitors.