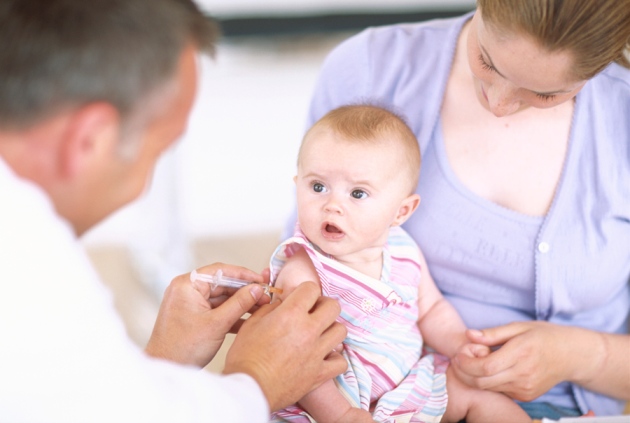 Vaccinations produce fewer antibodies in children with high levels of perfluorinated compounds in their blood.

A class of chemicals used widely in manufacturing could be damaging the effectiveness of common vaccines.

Perfluorinated compounds (PFCs) — organic chemicals containing fluorine — are used in food packaging and industrial manufacturing. They can be detected in many animals, including humans. A study in the Journal of the American Medical Association now shows that elevated levels of these chemicals in human blood are associated with a threefold increase in the risk of vaccines failing to protect against diseases such as tetanus1.

This reduced response could mean that PFCs harm the immune system, says Philippe Grandjean, an environmental epidemiologist at Harvard School of Public Health in Boston, Massachusetts, and lead author of the paper. Previous research by his team has shown that another widespread class of compounds, polychlorinated biphenyls (PCBs), is also linked with immune damage2.

“We thought that was bad, but the effect in PFCs was much stronger than we had seen for PCBs,” says Grandjean, who also works at the University of Southern Denmark in Odense. “It’s likely this is going to be a programming effect that is going to stay with these kids for their whole lifetimes.”

Dori Germolec, an immunologist at the US National Institute of Environmental Health Sciences in Research Triangle Park, North Carolina, says that PFCs are known to affect the immune systems of mice. “The data in this paper is very consistent with what has been published in the laboratory-animal literature in the past few years,” she says. “These compounds are immunosuppressive.”

Grandjean’s team gathered its data in the Faroe Islands, studying 587 children born at the National Hospital in Tórshavn in 1999–2001. The researchers measured levels of PFCs in maternal blood serum collected during pregnancy to assess prenatal exposure, and measured postnatal exposure by analysing PFC levels in blood drawn from the children at the age of five. They then compared these data with the children's immune responses to tetanus and diphtheria vaccines at the ages of five and seven.

A twofold increase of major PFCs in the blood of a five-year-old child was associated with a 50% decrease in concentrations of antibodies to tetanus and diphtheria at age seven. A doubling of concentrations of two specific PFCs — perfluorooctanesulfonic acid (PFOS) and perfluorooctanoic acid (PFOA) — was found to triple the risk of a seven-year-old child having too few antibodies to be protected against disease. PFOS and PFOA are already being phased out by one industrial manufacturer: 3M in St Paul, Minnesota. But ending production now won't cut the risk immediately, because PFCs persist in the environment for long periods.

Margie Peden-Adams, a toxicologist at the University of Nevada in Las Vegas, says that Grandjean's work adds to the evidence that there may be a link between PFCs and immune suppression in humans. The next step, she says, will be to repeat the experiments in other populations, testing whether the effect is unique to the Faroese, determining the risk from various exposure routes and discovering how exactly the chemicals affect the immune system.

The relative importance of the many ways that PFCs can be taken up by humans is not well understood3. Many chemicals that are currently causing health concerns accumulate in marine animals, and the population of the Faroe Islands eats a lot of fish. However, levels of PFCs in the blood of Faroese people are not actually higher than those in people in the United States, England or Denmark. Because PFCs are used in textile manufacturing and food packaging, eating contaminated seafood is probably not the only route of exposure.

Grandjean's team has received a grant from the US National Institutes of Health to continue its work and look at another cohort of Faroese children. The researchers also have plans to examine children in Greenland.

The findings add to concerns about many different types of chemicals used in manufacturing and food products. Research linking flame retardants and the plastic-manufacturing chemical bisphenol A to health problems (see 'The big test for bisphenol A') have caused high-profile public scares.

Grandjean says that the way chemicals are tested and regulated needs to be overhauled.

“There hasn’t been sufficient pressure to make developmental toxicity a priority,” he says. “This is a much larger problem.”