Mantis shrimp appear to use a simple yet speedy system to detect colour.
MIKE BOK

Mantis shrimp don’t see colour like we do. Although the crustaceans have many more types of light-detecting cell than humans, their ability to discriminate between colours is limited, says a report published today in Science1.

Researchers found that the mantis shrimp’s colour vision relies on a simple, efficient and previously unknown mechanism that operates at the level of individual photoreceptors. The results upend scientists' suspicions that the shrimp, with 12 different types of colour photoreceptors, could see hues that humans, with just 3, could not, says study co-author Justin Marshall, a marine neuroscientist at the University of Queensland in Brisbane, Australia. 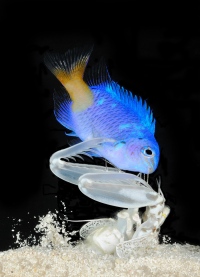 To test whether the mantis shrimp, with its 12 receptors, can distinguish many more, Marshall's team trained shrimp of the species Haptosquilla trispinosa to recognize one of ten specific colour wavelengths, ranging from 400 to 650 nanometres, by showing them two colours and giving them a frozen prawn or mussel when they picked the right one. In subsequent testing, the shrimp could discriminate between their trained wavelengths and another colour 50–100 nanometres up or down the spectrum. But when the difference between the trained and test wavelengths was reduced to 12–25 nanometres, the shrimp could no longer tell them apart.

If the shrimp eye compared adjacent spectra, like the human eye does, it would have allowed the animals to discriminate between wavelengths as close as 1–5 nanometres, the authors say. Instead, each type of photoreceptor seems to pick up a specific colour, identifying it in a way that is less sensitive than the human eye but does not require brain-power-heavy comparisons. That probably gives the predatory shrimp a speed advantage in distinguishing between different-coloured prey, says Roy Caldwell, a behavioural ecologist at the University of California, Berkeley.

Michael Bok, a biologist at Lund University in Sweden who studies vision, says that the work is an important step towards understanding the incredible complexity of the mantis-shrimp eye. “The next step, really, is to figure out what these visual signals tell the brain and how the brain uses these signals.”