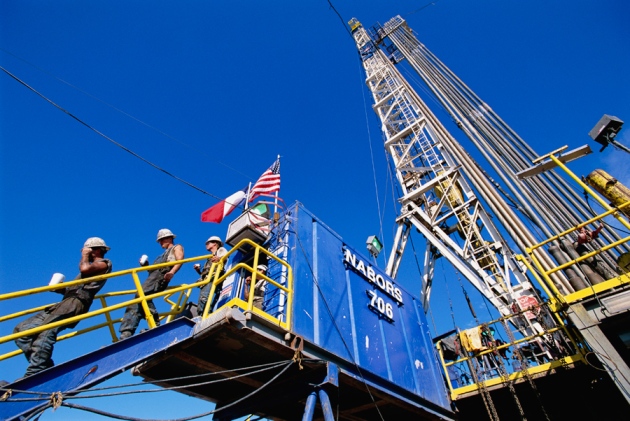 Oil and gas extraction can trigger earthquakes of significant size.

Expanded oil and gas operations in the central and eastern United States have triggered earthquakes as large as magnitude 5.7, as drillers inject wastewater back into the ground. But seismologists now report a bit of good news: such 'induced' quakes appear to shake the ground less than a naturally occurring earthquake of the same magnitude would.

That is good news because less shaking means less damage. “Maybe induced earthquakes aren’t quite as fearsome as they may seem,” says Susan Hough, a seismologist at the US Geological Survey (USGS) in Pasadena, California, whose work is published in the Bulletin of the Seismological Society of America1. “The hazard from induced quakes is going to be down a notch relative to tectonic quakes.”

But the observation holds only for areas more than 10 kilometres from the earthquake’s epicentre. Anyone close to the drilling would still feel as much shaking as a natural quake would bring. “This might lead to a recommendation that deep injection wells should be kept 10 kilometres away from population centres,” says Hough.

The injection of wastewater during conventional oil and gas extraction tends to trigger earthquakes of about magnitude 4 to 52. (The controversial technique of hydraulic fracturing, or ‘fracking’, also generates earthquakes but usually only of around magnitude 3 in size.) Some of these quakes have caused significant damage, such as a series of three quakes in November 2011 near Prague, Oklahoma, that occurred within just a few kilometers of fluid injection wells and destroyed at least 14 homes in neighbouring towns3.

“There’s been an awful lot of work on induced quakes, but people haven’t really been looking at the shaking they generate,” says Hough. So she decided to explore a USGS database known as the Did You Feel It? system, in which anyone who experiences the ground moving can report it. The sheer number of people who participate makes the database an accurate and useful tool, says Hough — especially in the central and eastern United States, which are not as densely studded with seismometers as, say, California.

Hough analysed data for 11 induced earthquakes in the central and eastern United States, from February 2011 in Arkansas to December 2013 in Oklahoma. “The observations are very straightforward — in every single case the intensities are low,” she says.

The relatively low levels of shaking suggest that induced earthquakes have a low 'stress drop', a measure of how an earthquake behaves. Two earthquakes of the same magnitude can have different stress drops. Imagine two trucks rumbling across the same distance: one moves in short, fast jerks; the other moves slowly and smoothly. The second truck would have the lower stress drop.

Induced earthquakes may have lower stress drop than natural ones because the fluids injected into the ground lubricate geological faults and allow them to slip more smoothly, Hough says. The discovery may provide another tool to determine whether an earthquake is natural or induced.

Danielle Sumy, a seismologist at the University of Southern California in Los Angeles, says that Hough’s findings mesh with her own analysis of the Prague earthquakes. Sumy is analysing data from seismometers set out after the earthquakes there to capture the aftershocks. Her preliminary findings support the idea that induced quakes cause less shaking than natural quakes, Sumy says.

“[Hough] shows that what we think should happen during a natural tectonic quake isn’t really occurring for these induced events,” Sumy says. “That's the power of using community-based information.”