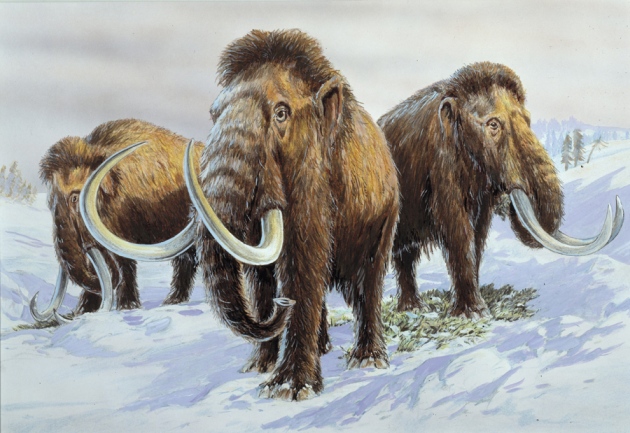 Unlike their elephant cousins, woolly mammoths were creatures of the cold, with long hairy coats, thick layers of fat and small ears that kept heat loss to a minimum. For the first time, scientists have comprehensively catalogued the hundreds of genetic mutations that gave rise to these differences.

The research reveals how woolly mammoths (Mammuthus primigenius) evolved from the ancestor they share with Asian elephants (Elephas maximus). It could even serve as a recipe for engineering elephants that are able to survive in Siberia.

“These are genes we would need to alter in an elephant genome to create an animal that was mostly an elephant, but actually able to survive somewhere cold,” says Beth Shapiro, an evolutionary geneticist at the University of California, Santa Cruz who was not involved in the latest research. As fanciful as it sounds, such an effort is at a very early stage in a research lab in Boston, Massachusetts.

The first woolly mammoth genome was published in 2008 (ref. 2), but it contained too many errors to reliably distinguish how the mammoth genome differs from those of elephants. Other studies singled out individual mammoth genes for close inspection, identifying mutations that would have endowed the animals with light coats3 and oxygen-carrying haemoglobin proteins that work in the cold4.

In the latest study, Vincent Lynch, an evolutionary geneticist at the University of Chicago in Illinois, and his team describe how they sequenced the genomes of three Asian elephants and two woolly mammoths (one died 20,000 years ago, another 60,000 years ago) to a very high quality. They found about 1.4 million DNA letters that differ between mammoths and elephants, which altered the sequence of more than 1,600 protein-coding genes. The study was posted on the biology preprint server bioRxiv.org on 23 April1.

Combing the literature for information about what those proteins do in other organisms revealed dozens of genes implicated in skin and hair development, fat storage and metabolism, temperature sensation and other aspects of biology potentially relevant to life in the Arctic.

For instance, several of the genes with changes unique to the mammoths were involved in setting the circadian clock, a potential adaptation to living in a world with dark winters and 24 hours of daylight in summer. Other Arctic animals such as some reindeer have similar mutations. 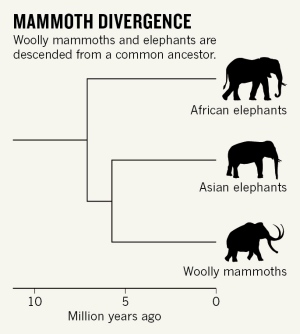 The mammoth genomes also contained extra copies of a gene that controls the production of fat cells and variations in genes linked to insulin signalling, which are in turn linked to diabetes and diabetes prevention. And several of the genes that differ between mammoths and elephants are involved in sensing heat and transmitting that information to the brain.

The team ‘resurrected’ the mammoth version of one of the heat-sensing genes, which encodes a protein called TRPV3 that is expressed in skin and also regulates hair growth. They inserted the gene sequence into the genomes of human cells in the lab and exposed them to different temperatures, revealing that the mammoth TRPV3 protein is less responsive to heat than the elephant version is. The result chimes with a previous finding that mice with a deactivated version of TRPV3 are more likely to spend time in colder parts of their cage compared with normal rodents, and boast wavier hair.

The next step, says Lynch, is to insert the same gene into elephant cells that have been chemically programmed to behave like embryonic cells, and so can be turned into a variety of cell types. Such induced pluripotent stem (iPS) cells could then be used to examine expression of mammoth proteins in different tissues. Lynch's team also plans to test the effects of other mammoth mutations in iPS cells.

Similar work is already being carried out in the lab of George Church, a geneticist at Harvard Medical School in Boston. Using a technology known as CRISPR/Cas9 that allows genes to be easily edited, his team claims to have engineered elephant cells that contain the mammoth version of 14 genes potentially involved in cold tolerance — although the team has not yet tested how this affects the elephant cells. Church plans to do these experiments in “organoids” created from elephant iPS cells.

The work, says Church, is a preamble to editing an entire woolly mammoth genome — and perhaps even resurrecting the woolly mammoth, or at least giving an Asian elephant enough mammoth genes to survive in the Arctic. The second option would be easier to do because it would require fewer mutations than the first option. A 16-square-kilometre reserve in north Siberia, known as Pleistocene Park, has even been proposed as a potential home for such a population of cold-tolerant elephants.

However, whether anyone would want to do such a thing is a different question, says Lynch, and Shapiro agrees. In her book How to Clone a Mammoth (Princeton University Press, 2015), she outlines the innumerable hurdles that stand in the way of breeding genetically modified ‘woolly elephants’ — from the ethics of applying reproductive technologies to an endangered species to the fact that the field of elephant reproductive biology is still immature.

“I probably should have called the book How One Might Go About Cloning a Mammoth (Should It Become Technically Possible, And If It Were, In Fact, a Good Idea, Which It's Probably Not),” Shapiro says. “But that was a much less compelling title.”