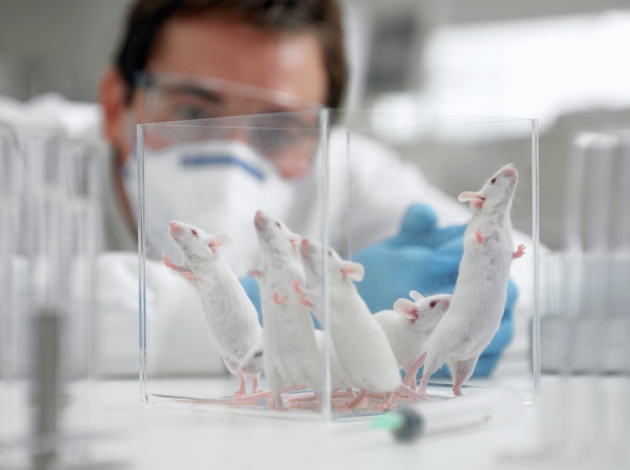 Male, but not female, experimenters induce intense stress in rodents that can dampen pain responses, according to a paper published today in Nature Methods1. Such reactions affect the rodents’ behaviour and potentially confound the results of animal studies, the study suggests.

The authors discovered this surprising gender disparity while investigating whether the presence of experimenters affects rodent pain studies. For years, anecdotal reports have suggested that rodents show a diminished pain response when a handler remains in the room.

This apparent effect is “something that people have been whispering about at meetings for years,” says lead author Jeffrey Mogil, a pain researcher at McGill University in Montreal, Canada. “But no one had bothered to look at this systematically.”

Mogil’s team measured the response of mice and rats to an injection in the ankle, either in the presence of different experimenters or while alone in an empty room (the experimenters gave the injection and then quickly left). To their surprise, the animals seemed to show a decrease in pain response of about 40% when a man rather than a woman remained in the room, based on pain levels analysed using the mouse grimace scale.

A T-shirt worn by a man the previous night, placed in the room with the animals, had the same effect. And so did the scent of chemicals from the armpit, called axillary secretions, some of which are found at higher concentrations in male mammals than in females.

But women experimenters did not alter the animals’ pain response — in fact, a female presence (or that of their T-shirts) seemed to counteract the response to men.

When the authors dug further, they discovered that these male scent stimuli weren’t acting on pain pathways, as an analgesic does. Instead, the stressed-out animals had elevated blood levels of the stress hormone corticosterone. The stress had, in effect, temporarily quashed the pain response.

It wasn’t just men who caused the stress spike in the rodents, but any nearby male animal, including guinea pigs, rats, cats and dogs. Male cage-mates of the animal being tested were the only exception, and produced no changes in stress hormone levels.

What’s more, the researchers replicated the effect in another behavioural assay, called the open field test, which measures anxiety rather than pain. And Mogil’s Swedish collaborators replicated some of the study's experiments in their own lab and got the same results.

“What this boils down to is that olfactory exposure to male stimuli is stressful for mice — and just shockingly stressful, compared to other known stressors,” says Mogil.

How should experimenters address this potentially powerful confounding factor? Mogil says that the findings should at least prompt researchers to report the gender of experimenters in their publications, and if the experimenters change mid-stream, to include their gender as a variable in the analysis.

"It's the kind of result a lot of people wish wouldn’t happen," says Douglas Wahlsten, an emeritus professor of psychology at the University of Alberta, Canada who has studied how animals react to experimenters. Such effects should be taken more seriously, Wahlsten says. “I think this paper will make people more aware.”

Animal researchers, says Garner, will have to embrace statistical methods that compensate for a greater range of variability. “We need to think about animals as more like human subjects,” he says, “than as controllable reagents.”