The cost of the life-saving antimalarial drug artemisinin could be lowered by a third, with a new method that utilises a waste product from the current plant extraction process, according to researchers.

Artemisinin is sourced from the cultivated plant Artemisia annua (sweet wormwood), but demand is outstripping supply because artemisinin combination therapies (ACTs) are now recommended as a front-line treatment for malaria by the WHO. 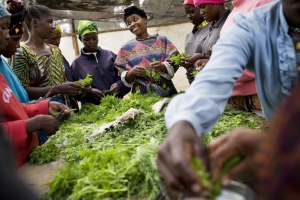 The plant Artemisia annua is used to make Artemisinin, currently the most efficient drug combating malaria.

The artemisinin extraction process produces around ten times as much artemisinic acid as it does artemisinin itself.

But converting the artemisinic acid precursor into the chemically more complex artemisinin molecule has proved a "formidable challenge" for chemists, researchers noted.

Now, they have found a quick and easy way of converting this acid into artemisinin.

They used continuous flow chemistry which involves passing chemicals down a tube to increase reaction times, efficiency and safety.

This differs from traditional 'batch' chemistry where chemicals are mixed together in a large pot, and it has allowed researchers to simplify one "crucial step" required to produce the molecule.

"We have spent ten years implementing flow chemistry, currently used for oil refining, for use in the manufacture of pharmaceuticals.

This technique is a totally different way of thinking about artemisinin synthesis," said Peter Seeberger, director at the Max Planck Institute of Colloids and Interfaces, Germany, and co-author of the study1 published in Angewandte Chemie International Edition last week1.

Seeberger told SciDev.Net that one, refrigerator-sized chemical reactor can produce 200 grams of artemisinin per day, and unpublished results indicate potential yields of up to 800 g per day.

"If we scale this up, in six months we will be at a point where 400 reactors (that run continuously) will be sufficient to produce the entire world's supply. Our reactors … could shave the total cost of the drug by a third."

Kevin Booker-Millburn, a chemist at the University of Bristol, United Kingdom, said "this eye catching new research is a huge advance".

"Commercialisation of this could significantly lower the cost of artemisinin with obvious benefits to many of the poorest nations of the world where malaria is endemic."

Colin Sutherland, a malaria expert from the UK's London School of Hygiene & Tropical Medicine, said: "A new more reliable supply of cheaper artemisinin could resolve many of the supply problems, and by making the drugs cheaper may also reduce the problems of drug counterfeits — if the real thing is affordable, there is much less room for profiteering from fake drugs".

Large-scale production could start in as early as six months' time if negotiations with pharmaceutical companies are successful, Seeberger said.