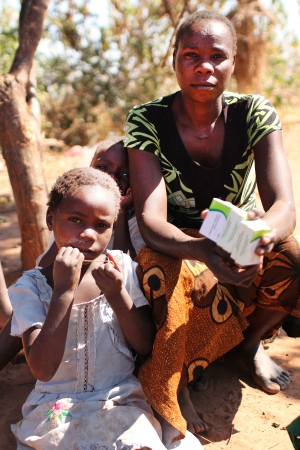 People in malaria-prone countries could soon be treated with drugs made by engineered yeast.

“It’s been a dream project — but it’s been a long dream,” says Jay Keasling, a biochemical engineer at the University of California, Berkeley. Seven years ago, he and his team genetically engineered yeast to produce artemisinic acid (D.-K. Ro et al. Nature 440, 940–943; 2006), a precursor to the best malaria treatments available: artemisinin-based combination therapies (ACTs). Synthetic biology, Keasling hoped, could produce the drug more cheaply and reliably than natural sources, benefiting the roughly 200 million people infected with malaria each year.

Keasling’s pipe dream has turned into a drug pipeline. In 2008, Paris-based pharmaceutical company Sanofi licensed the yeast that he helped to develop, and at an artemisinin conference in Nairobi last month, Keasling learned that the company had produced almost 39 tonnes of artemisinic acid — the first industrial-scale deployment of synthetic biology for drug production. The stock could be converted to at least 40 million treatments, says Keasling.

But the elegant science faces some messy realities. This year will see the end of one of the main funding routes for ACTs — the Affordable Medicines Facility — Malaria (AMFm) programme, run by the Global Fund to Fight AIDS, Tuberculosis and Malaria in Geneva, Switzerland. Its demise may not leave enough alternative funding to pay for the extra treatments made possible by the semi-synthetic process. Furthermore, if Sanofi’s product is rushed into pharmacies at similar prices to existing products, it could disrupt an already volatile market (see Nature 466, 672–673; 2010). “If it’s brought in too fast it could create huge shortages, because people will stop producing the natural stuff,” says Malcolm Cutler, technical adviser to the Assured Artemisinin Supply System initiative, which organized the Nairobi conference. 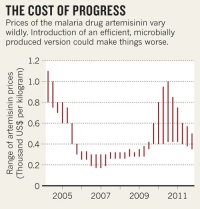 The sweet wormwood plant, Artemisia annua, has until now been the only source of artemisinin. Drug-makers convert the natural product into derivatives that are more easily taken up by the body, and then combine them with other drugs to prevent the malaria parasite from developing resistance. Since 2005, when ACTs became the preferred treatment of the World Health Organization (WHO), governments and health policy-makers have encouraged farmers in China, Vietnam and elsewhere to grow A. annua to meet rising demand. But the dependence on erratic donor funding, along with a production cycle that can take a year and a half from planting to drug production, has made it difficult to manage that supply. Last year, a bumper crop of A. annua and fears of declining funding sent artemisinin prices plummeting (see ‘The cost of progress’).

Yeast make ACT production faster and more manageable. The microbes are not affected by weather, and they churn out artemisinic acid that is readily turned into semi-synthetic artemisinin, which Sanofi or other makers can convert into ACT ingredients such as artesunate. The whole process takes less than three months. “You get an order, you fire up the bioreactors, and you ship it out,” says Keasling. Sanofi hopes to get WHO approval for semi-synthetic artemisinin in the coming months, says Ponni Subbiah, a drug-development programme leader at PATH, a global health organization based in Seattle, Washington, which has funded and coordinated the development of semi-synthetic artemisinin.

But funding for ACTs is uncertain. In 2012, the AMFm subsidized about 60% of the world’s total supply of the drugs. With an unusual approach — supplying most of the drugs through small, for-profit pharmacies, rather than public clinics — the programme got more ACTs into circulation. But donors were not convinced that the drugs were reaching the neediest patients. In November 2012, the Global Fund announced that it would merge the AMFm into its broader malaria campaign (see Nature 491, 508; 2012). With so many demands on aid funding, some health experts worry that support for ACT distribution will falter.

Fabienne Jouberton, AMFm’s senior officer for price negotiations, acknowledges that it will probably become much more difficult for A. annua growers and drug manufacturers to plan ahead. Rather than negotiating with a single body — the AMFm — they will have to assess demand separately in each individual country. “It’s not optimal,” she says.

For now, artemisinin costs about US$400 per kilogram, and the semi-synthetic version is unlikely to be much cheaper. But Sanofi announced at the Nairobi meeting that it plans to produce 60 tonnes of the compound in 2014, alarming A. annua growers and extractors, who said that the new supply could take more than one-third of their market. Sanofi and its partners are adamant that for the next several years, semi-synthetic artemisinin will be deployed only to smooth out market fluctuations, and will be sold at a ‘no profit–no loss’ price of $350–400 that is unlikely to undercut other suppliers. The conference “almost felt like a price-fixing meeting”, says Keasling wryly.

He is convinced that, eventually, the price could be lowered by making the fermentation process more efficient. Fitful funding is all the more reason to provide cheaper ACTs, adds Keasling, who would like all such drugs to be made using the semi-synthetic process. But he agrees that gradual introduction is necessary to avoid driving conventional producers out of business — at least “until we have enough installed capacity to take over the entire world supply”.