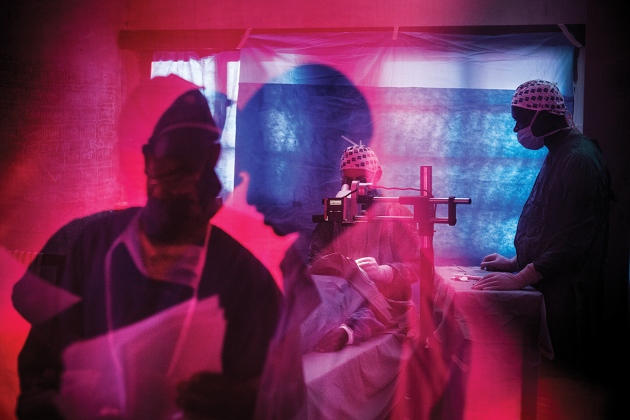 A cataract patient receives synthetic lenses in the Democratic Republic of the Congo.

Polymers have a wide range of physical and mechanical properties suited to many purposes in medicine. For example, poly(methyl methacrylate) (PMMA), which resembles bones and teeth, has been used since the 1930s for dental implants and hip replacements. Poly(2-hydroxyethyl methacrylate) has been used since the early 1960s for soft contact lenses because it is transparent, flexible and stays swollen and wet. Strong yet bendable polyurethanes have been used for heart valves for decades.

But once in the body, polymers can cause side effects. These might be triggered by components left over from the polymerization process, such as monomers, reaction initiators or catalysts. For example, residual methyl methacrylate monomer in PMMA damages cells, irritates eyes and skin and disturbs the nervous system1. Certain silicones in breast implants can cause infections2. Poly(ethylene terephthalate), often used to make vascular grafts, traps proteins on its surface that can disturb blood flow and induce clots3.

Clinical approval of new materials remains difficult and expensive4. Rounds of extensive toxicological studies are followed by tough clinical trials to assess the safety and efficacy of a proposed device. These hurdles mean that repurposing old materials is easier than introducing new ones. But promising new options abound.

What's needed is a more integrated approach to designing and regulating polymers in biomedicine. From the start, designers need to address all the components that may render a material toxic or capable of causing cancer, birth defects, genetic mutations or blood clots. Below we outline the sort of standardized testing platforms — experimental and computational — that are needed to evaluate biocompatibility.

Progress over the past two decades holds promise for designing new biomaterials. For example, macromolecular structures can be designed and fabricated with precision. Techniques such as reversible-deactivation radical polymerization attach and detach small active molecular groups (radicals) to block undesirable steps during the reaction that forms the polymer. The range of molecular weights of the polymer chains is controlled and little catalyst is left behind (just a few parts per million). The biocompatibility of the polymers can be enhanced by further purification and by using aqueous solvents and non-metal catalysts.

Another breakthrough is 'click chemistry', which builds polymers and molecules in a modular way through a series of reactions. Different sorts of polymer can be linked together, vastly broadening the range of surface chemistries possible for biomedicine. Click reactions are efficient, have high yields and few by-products5. They need only mild conditions and benign or removable solvents. Click chemistry has been used to make gels, including patterned forms of hydrogel, where different areas perform different biochemical functions5. Unfavourable copper catalysts and azides are being phased out through, for example, carrying out reactions with greater precision and without catalysts.

Another emerging area is assembly through physical interactions between molecules. For example, hydrophilic and -phobic groups arrange themselves differently in polar or non-polar liquids. They can self-assemble into thin plates, aggregates and three-dimensional structures. Biopolymers made from DNA and proteins are increasingly used to make materials. Polymeric materials shaped as nanotubes, nanospheres, fibres and tapes have been prepared by self-assembling peptides or macromolecules.

Surfaces can be modified to control interactions. For example, some hydrogels repel proteins electrostatically, which avoids immune reactions or the biosurface becoming fouled6. Repellent coatings on medical devices such as catheters can be based on slippery, liquid-infused, porous surfaces (SLIPS) to prevent thrombosis7. 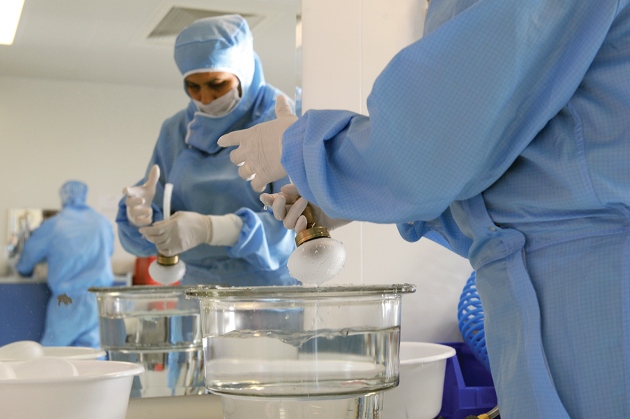 Silicone membranes for breast implants are tested for water resistance.

However, it is difficult to get clinical approval for new polymeric systems4. Toxicological studies and clinical trials require more money and equipment than a standard academic laboratory can muster. An industrial setting is a must.

The regulatory process for multifunctional medical devices is complicated. For example, a single product such as a heart stent that slowly releases a drug can have several components, including the drug, a polymer coating and metallic frame. The US Food and Drug Administration evaluates the effectiveness and safety of either the primary use or of independent uses, depending on what the product is mainly meant to do. Thus it is easier to use established polymers in new applications than to get new ones approved.

Addressing these challenges requires various stakeholders to work together, including academia, industry and regulatory agencies. They should evaluate the biomaterial's design earlier in the research phase, based on regulatory needs and the performance specifications required for each application.

To predict how human tissues will respond to new materials before they are tested in clinical trials we must develop standardized in vitro and in vivo evaluation platforms. Toxicity and inflammatory response are particularly important to assess because these human reactions cannot be faithfully reproduced in animal models. Several options need research.

'Organ-on-a-chip' systems capture aspects of human physiology using miniaturized human tissues. Most existing platforms focus on metabolic and barrier tissues, such as liver and lung. Polymeric materials will require systems capable of testing human blood and the immune system. Variations in patients must be considered. Organs-on-a-chip could contain cells derived from specific patients.

Modelling and simulations can be used to understand and predict the behaviour of body systems, from a single cell to the whole organism. These computational tools can also be used to interpret, analyse and predict the underlying response mechanisms to new substances. For example, a mathematical method known as physiologically based pharmacokinetic modelling (PBPK) is used to determine exposure doses that can lead to toxicity8. PBPK parameters use data from studies done in vitro, in vivo and in silico. The increased risk of human cancer from vinyl chloride was evaluated using such a model. Although based on data from animals, its estimates are consistent with human epidemiological data.

High-throughput screening can be used to test the safety of libraries of new polymers, while lowering the cost and reducing animal testing. To screen hundreds of thousands of chemicals, rapid throughput microarrays have been used in vitro and in vivo9. Automatic systems that contain small vertebrates to conduct high-throughput pharmacological tests in vivo have been developed10. Similar tools would be useful in assessing new polymers.

Integrating all these platforms into the design process would accelerate the clinical translation of biomaterials.