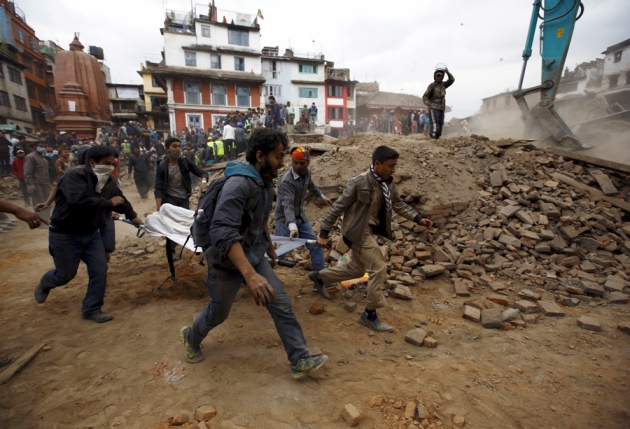 In Kathmandu, many older buildings were constructed of unreinforced masonry that cannot survive a strong earthquake.

A magnitude-7.8 earthquake hit just 80 kilometres northwest of Nepal's capital Kathmandu on 25 April, destroying buildings and devastating much of the city. The ground shook well beyond Nepal’s borders, into Tibet and northern India, in one of the worst natural disasters to strike the Himalayas in years; thousands of people are feared dead. Nature looks at the geological and social circumstances that combined to make the Nepal quake so deadly. 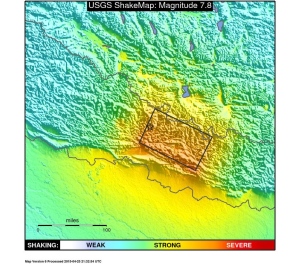 This map shows the projected intensity of shaking near the quake's epicentre, which is marked with a star.

Why did the quake happen?

The ground ruptured along one of the planet’s biggest geological collision zones, where the crustal plate that carries India slams into and dives beneath the crust of central Asia at a rate of 4–5 centimetres a year. That smash-up raises the Himalayas to their great height and makes the region one of the most seismically dangerous in the world. Geological stress builds up along the Himalayas and releases itself periodically in earthquakes.

The 25 April quake was relatively shallow — just 15 kilometres deep, according to the US Geological Survey (USGS). Preliminary data suggest that the Himalayan fault broke a chunk of crust some 150–200 kilometres long, says Susan Hough, a seismologist at the USGS offices in Pasadena, California, who has worked in Nepal.

Were scientists expecting it?

To a large extent, yes. Seismologists including Roger Bilham of the University of Colorado Boulder, and Jean-Philippe Avouac of the California Institute of Technology in Pasadena, have long warned that crustal stresses are building up in Nepal1, 2. “This is not an oddball earthquake,” says Hough.

Even so, the 25 April earthquake was a little smaller and farther east than what some had expected. It occurred close to the site of a magnitude-8.1 earthquake in 1934 that killed more than 10,000 people and sent buildings in northern India sinking more than a metre deep into the ground.

How bad is the damage?

Brick temples in Kathmandu crumbled, including the iconic Dharahara tower. Other buildings slumped sideways or pancaked to the ground. Damage assessments are underway, but Hough says that she was relatively heartened to see buildings standing in the background of photographs that focused on collapsed temples.

Officials in Nepal estimate that at least 3,700 people are dead as of 27 April, and that number is likely to rise in the days to come. On Mount Everest, the earthquake triggered an avalanche that swept into base camp. At least 18 people are thought to have been killed on the mountain.

Nepal has a small but experienced community of earthquake professionals, and a national network of seismic and geodetic monitoring stations. Several organizations that focus on risk reduction have been working actively in Kathmandu in recent years. On 12 April, two of them — the National Society for Earthquake Technology-Nepal in Sainbu and GeoHazards International of Menlo Park, California — updated their earthquake scenarios for the Kathmandu Valley. That long-running project envisioned a quake similar to the 1934 disaster and laid out what to do in the aftermath.

In Kathmandu, older buildings were often constructed from unreinforced masonry, which cannot withstand the ground shaking from a quake so nearby. The area has also become more urban, and many newer buildings are built in dense neighbourhoods without structural reinforcements such as steel rebar.

“It’s not a problem of ignorance, it’s a problem of resources,” Hough says. “People are building houses to live in with the resources that they have. They can’t afford rebar and engineering.”

Assuming that this earthquake is the largest event in this seismic episode, Nepal can expect more than 30 aftershocks greater than magnitude 5 over the next month. One magnitude-6.6 aftershock has already hit. 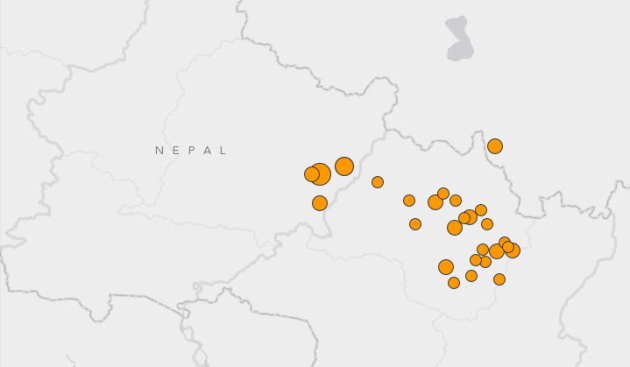 Aftershocks have continued in the hours after the main earthquake hit; the locations of all of the tremors are shown with orange dots.

This story was updated on 27 April with the latest death-toll figures.