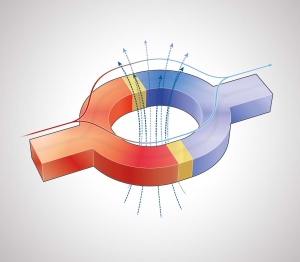 Electricity can run between two superconductors even through electrically insulating barriers (yellow). Now researchers have found that a magnetic field (curved arrowa) can switch the amount of heat that flows from a hot side (red) to a cold one (blue).

The strange world of quantum mechanics just got a little stranger with the discovery that a magnetic field can control the flow of heat from from one body to another. First predicted nearly 50 years ago, the effect might some day form the basis of a new generation of electronic devices that use heat rather than charge as the information carrier.

The research stems from the work of physicist Brian Josephson, who in 1962 predicted1 that electrons could 'tunnel' between two superconductors separated by a thin layer of insulator — a process forbidden in classical physics. The Josephson junction was subsequently built and used to make superconducting quantum interference devices (SQUIDs), which are now sold commercially as ultra-sensitive magnetometers.

In the latest work, Francesco Giazotto and María José Martínez-Pérez at the NEST nanoscience institute in Pisa, Italy, measured the devices’ thermal behaviour — that is, how the electrons inside them transfer heat2. The duo heated one end of a SQUID several micrometres long and monitored the temperature of an electrode connected to it. A SQUID consists of two y-shaped pieces of superconductor joined together to form a loop, but with two thin pieces of insulating material sandwiched in between (see figure); as the researchers varied the magnetic field passing through the loop, the amount of heat flowing through the device also changed. The effect was in line with a theory put forward by Kazumi Maki and Allan Griffin in 19653.

The device worked by partly reversing the heat transfer, so that some would flow from the colder body to the warmer one. “This is completely unintuitive,” says Giazotto. “People are used to thinking of heat as disorder, so how can you impose quantum order on it? Amazingly, a device with Josephson junctions can do that.”

This apparent violation of the second law of thermodynamics — which states that heat will always flow from a hotter to a colder body — is, in fact, perfectly legal, says Giazotto, because only part of the total heat flow is subject to the phase variation. When you also take into account the heat transferred by single electrons, as occurs inside normal metals, the net flow is still from the hot to the cold end.

Like its electrical counterpart, this variation in the heat flow can be explained in terms of the superconductors’ 'phase' — the position of the peaks and troughs of the wavefunction that describes the superconducting electron pairs in the SQUID’s loop. The greatest heat flow occurs when the peaks inside one half of the loop line up with peaks in the other half, whereas the flow is at a minimum when peaks meet troughs. The magnetic field shifts those phases relative to each other, thus modifying the heat flow.

Teun Klapwijk of the Delft University of Technology in the Netherlands describes Giazotto and Martínez-Pérez's research as “cute” but “not very surprising”. He also doubts that it will have significant practical applications. “The only possible area would be solid-state refrigeration, which would replace cryogenic liquids,” he says.

But Giazotto argues that the research could help to realize tiny but highly efficient heat engines. He also hopes it might form the basis of  “coherent caloritronics”, in which information is carried by heat exchanges instead of electrical ones5. In ordinary transistors, a voltage toggles an electric switch on and off, and the devices can be combined to form logic gates, the building blocks of computer chips; caloritronics would instead use 'thermal transistors' to switch on and off the transfer of heat. Previously, Giazotto and others have built devices that control heat exchanges using an electric rather than magnetic field4.