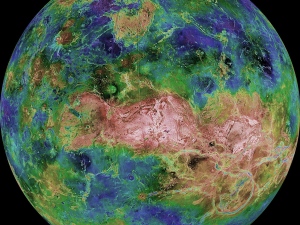 The discovery of magnetic storms on Venus means the planet might have an aurora.

When magnetic fields of opposite polarity collide and merge, they unleash a torrent of energy. The process, known as magnetic reconnection, can cause flares on the Sun and magnetic storms and shimmering auroras on magnetized planets with substantial atmospheres, such as Earth, Jupiter and Saturn.

Now scientists have discovered that magnetic reconnection also happens on Venus, a planet with no intrinsic magnetic field. The finding, reported today in Science1, suggests that magnetic reconnection may generate auroras on Venus, and could have contributed to the loss of a thick, water-rich atmosphere that scientists believe surrounded the planet during its early history, some 4 billion years ago.

The discovery suggests that explosive magnetic activity is likely to be a common feature of planets everywhere, says study author Tielong Zhang, a planetary scientist at the Space Research Institute of the Austrian Academy of Sciences in Graz. Magnetic storms on planets outside our Solar System, known as exoplanets, might occasionally generate radio signals that are strong enough to be detected from Earth, other researchers suggest.

Zhang and his colleagues analysed data from the European Space Agency’s Venus Express spacecraft, which has been in orbit around the planet since 2006. Their aim was to find the signal of magnetic reconnection in Venus’s magnetotail, the comet-like tail that forms on the side of the planet facing away from the Sun when the magnetic field carried by charged particles in the solar wind passes around the planet.

The data revealed a looped, magnetic structure called a plasmoid in Venus’s magnetotail, similar to an eddy created by a rock in a stream. This “is a strong indication of magnetic reconnection”, Zhang says, because it is known to be a sign of the phenomenon on other planets.

On a planet such as Earth, the tension between the opposing poles of the magnetic field aids reconnection. The discovery that Venus has magnetic storms too shows that, even without such a field, a planet can act as an anchor that helps the solar wind to reconnect with itself, says astronomer Jonathan Nichols of the University of Leicester, UK.

The study indicates that magnetic reconnection “is an active process around more cosmic bodies than previously thought”, whether or not they have their own field, Nichols says.

A similar kind of reconnection, governed by the solar wind’s magnetic field, is thought to occur in the tails of comets. Reconnection sometimes causes the tails to snap off and fly into space, as seen in 2007 with Comet Encke2.

In that respect, “Venus behaves like a big comet”, with reconnection lofting charged particles from the planet’s atmosphere into space, says astronomer Philippe Zarka of the Paris Observatory in Meudon, France. Just as the solar wind erodes a comet's tail, it may have also gradually detached molecules, such as water, from Venus’s atmosphere.

Zarka suspects that for planets outside the Solar System, only those with their own magnetic fields might produce energy bursts strong enough to be detected across interstellar distances of tens to hundreds of light years. New radio telescopes, such as the Low Frequency Array (LOFAR) in the Netherlands, might be able to pick up the strongest exoplanet radio emissions, says Nichols. If such detections were successful, it would provide a new way to search for exoplanets.