Software can transform a computer from a word processor to a number cruncher to a video telephone. But the underlying hardware is unchanged. Now, a type of transistor that can be switched with magnetism instead of electricity could make circuitry malleable too, leading to more efficient and reliable gadgets, from smart phones to satellites.

Transistors, the simple switches at the heart of all modern electronics, generally use a tiny voltage to toggle between ‘on’ and ‘off’. The voltage approach is highly reliable and easy to miniaturize, but has its disadvantages. First, keeping the voltage on requires power, which drives up the energy consumption of the microchip. Second, transistors must be hard-wired into the chips and can’t be reconfigured, which means computers need dedicated circuitry for all their functions.

A research group based at the Korea Institute of Science and Technology (KIST) in Seoul, South Korea, has developed a circuit that may get around these problems. The device, described in a paper published on Nature’s website on 30 January, uses magnetism to control the flow of electrons across a minuscule bridge of the semiconducting material indium antimonide (S. Joo et al. Nature http://dx.doi.org/10.1038/nature11817; 2013). It is “a new and interesting twist on how to implement a logic gate”, says Gian Salis, a physicist at IBM’s Zurich Research Laboratory in Switzerland.

The bridge has two layers: a lower deck with an excess of positively charged holes and an upper deck filled predominantly with negatively charged electrons. Thanks to the unusual electronic properties of the indium antimonide, the researchers can control the flow of electrons across the bridge using a perpendicular magnetic field. When they set the field in one direction, electrons are steered away from the positive bottom deck and flow freely. When the magnetic field is flipped, the electrons crash into the lower deck and recombine with the holes — effectively turning the switch off (see ‘Magnetic lock’). 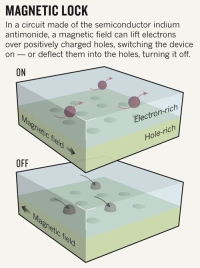 The ability of a magnetic logic gate to hold the switch on or off without a voltage “could lead to great reduction of energy consumption”, says study co-author Jin Dong Song, a physicist at KIST. Even more impressively, the magnetic switches “can be handled like software”, he says, by simply flipping the field to enable or disable a circuit. Thus a mobile phone could, for example, reprogram a bit of its microcircuitry to process video while its user watched a clip on YouTube, then switch the chip back to signal processing to take a phone call. This could greatly reduce the volume of circuitry needed inside the phone.

Such reconfigurable logic could be invaluable in satellites, adds Mark Johnson of the Naval Research Laboratory in Washington DC, a co-author of the paper. If part of a chip failed in orbit, another sector could simply be reprogrammed to take over. “You’ve healed the circuit and you’ve done it from Earth,” he says.

To really catch on, however, the magnetic logic would have to be integrated with existing silicon-based technologies. That may not be easy. For one thing, indium antimonide, the semiconductor crucial to the circuits, doesn’t lend itself well to manufacturing processes used to make modern electronics, according to Junichi Murota, a researcher working with nanoelectronics at Tohoku University in Japan. But Johnson says that it may eventually be possible to build similar bridges with silicon.

Geoff Brumfiel learns how replacing voltage with magnetism could make our smartphones faster.

Integrating the miniature magnets needed to control the devices into a normal chip wouldn’t be easy either. Companies should be able to solve these challenges, but only if they decide the devices are worthwhile, says Salis. At the moment, he adds, it is not clear whether the devices will perform well at the sizes needed for a practical chip — much smaller than the micrometre dimensions of the prototypes.

But Johnson notes that magnetism is already catching on in circuit design: some advanced devices are beginning to use a magnetic version of random access memory, a type of memory that has historically been built only with conventional transistors. “I think a shift is already under way,” he says.