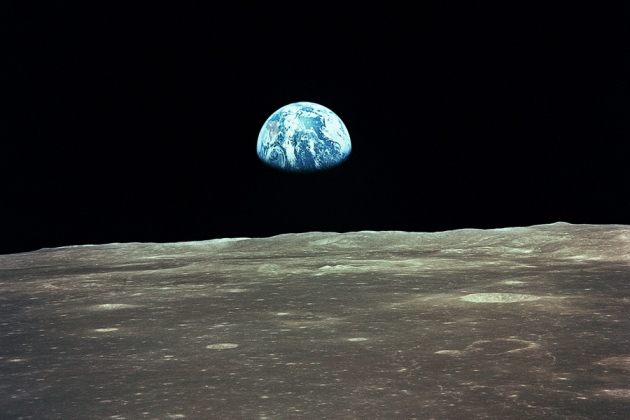 Most researchers believe the Moon formed after a protoplanet struck Earth 4.5 billion years ago.

A minor chemical difference between Earth and Moon rocks could have big implications for theories about how the Moon was born. Moon rocks contain a tiny bit more of the rare isotope oxygen-17 than do the rocks on Earth, say geochemists who measured oxygen using very precise methods.

“It changes the nature of the debate,” says Robin Canup, a planetary scientist at the Southwest Research Institute in Boulder, Colorado, who was not involved in the study. “If the difference between Earth and the Moon is a small amount as opposed to zero, we need to know that.”

Most researchers think that the Moon formed in the very early days of the Solar System, 4.5 billion years ago, when a large protoplanet smashed into the embryonic Earth. Debris from the collision mingled together and then settled into orbit around Earth, where it coalesced into the Moon. If that were the case, however, scientists would expect to see more of the remains of the original impactor in the Moon. The chemistry of Moon rocks would be different from that of Earth rocks.

“The big question was always, why do we not see this difference, why are Earth and the Moon so similar?” says Daniel Herwartz, an isotope geochemist at the University of Cologne in Germany and a member of the study team. The giant impact “is a nice theory that explains a lot of things, but there was this problem”. 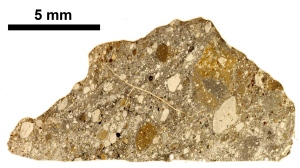 Moon impacts often eject lunar material that falls to Earth, such as this meteorite collected in 1999 in the Kalahari Desert in Botswana.

Herwartz and his colleagues decided to examine oxygen isotopes because planets and moons have a distinct oxygen fingerprint that records the exact environmental conditions in which they were born. The paper is published today in Science1. Earlier studies2, 3 found that the proportions of the different oxygen isotopes in Earth and the Moon — as averaged over their entire bulk — were essentially identical.

For the new study, the researchers used an extremely precise laser-based method to measure oxygen isotopes in a range of Earth rocks, meteorites and three lunar samples gathered by the Apollo astronauts. They found 12 parts per million more oxygen-17 in the Moon rocks as opposed to the Earth rocks. “It’s a tiny difference, that’s why it hasn’t been seen before,” says Herwartz.

He suggests that the body that triggered the Moon-forming impact, which some scientists call Theia, may have been chemically similar to a class of meteorites called enstatite chondrites. Those are similar enough to Earth, at least in terms of oxygen, that Theia wouldn’t have left a major imprint in the Moon’s chemistry, Herwartz says.

Some scientists are not impressed. According to Robert Clayton, a professor emeritus at the University of Chicago in Illinois who pioneered the use of oxygen isotopes in cosmochemistry, the authors may have done little more than find a more precise method of measurement. “I don’t see anything new in this paper — they’ve just repackaged the error bars,” says Clayton. The observed difference is simply not large enough to say anything significant about the Moon's formation, he says.

Lydia Hallis, an isotope researcher at Glasgow University, UK, notes that oxygen-17 can vary among Moon rocks, and so three Apollo samples may not necessarily represent the Moon as a whole. She adds that researchers might want to look more closely at the isotopes of other elements. If oxygen isotopes are more different than previously thought, perhaps elements such as titanium and silicon, which in past analyses seemed to be identical in Earth and the Moon, also could have minute but noteworthy differences.

Canup, though, says that the oxygen findings are likely to shake up the field. Planetary modellers have been trying to develop collision scenarios in which the Moon and Earth ended up chemically similar, but not identical, after the Moon-forming impact. “That’s the kind of debate I’m very happy to see,” she says.