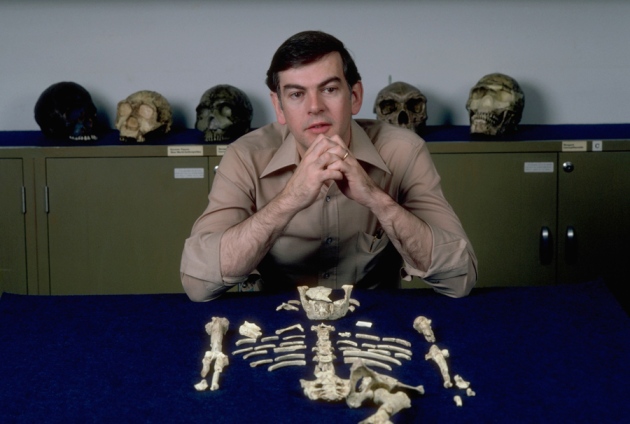 Donald Johanson with Lucy in a 1982 picture.

“Feeling really lucky,” Donald Johanson wrote in his diary the morning of 24 November 1974, while staying at a remote camp in northern Ethiopia’s Afar region. Hours later, the palaeoanthropologist, now at Arizona State University in Tempe, happened upon the 3.2-million-year-old remains of a small-bodied early human, possibly on the lineage that gave rise to Homo sapiens. He and his collaborators named it Australopithecus afarensis, and the skeleton became known to the world as Lucy. Forty years on, Johanson, now 71, talks about the discovery and Lucy’s enduring importance and appeal.

What did scientists know about early human evolution before Lucy?

Before my discoveries at the site of Hadar in Ethiopia, we had relatively few fossil species, and only a handful that were as old as 3 million years: There was a piece of arm, a single tooth, a chunk of jaw and maybe a bit of skull. But we didn't have any idea of what early hominids looked like.

What took you to Ethiopia in the early 1970s?

A young geologist by the name of Maurice Taieb [who is now director of research at the European Centre of Research and Teaching of Geosciences of the Environment in Aix-en-Provence, France] had been exploring the Afar region, and during the course of that preliminary work in the late 1960s, he encountered large areas that were very fossil-rich. He asked me to accompany him in 1972 to this region in the Afar, and we spent six weeks in the field. We were dazzled by the high concentrations of fossils, the deep sedimentary sequences, and the presence of volcanic ash, which would help determine a firm geochronological framework. In 1973 we decided to plant our flag at Hadar, which is where the Awash River turns east, and have been working on-and-off there ever since.

It was very remote. There was no paved road to this area, so it was difficult to supply. On the plus side, there was a permanent source of water — the Awash River — nearby. Temperatures were regularly 110, 115 °F (43–46 °C) and you lived in a little tent for two and a half months. I was back to the site a couple years ago, and it's not as easy for me as it was when I was 28 years old. It was a place where you had to have the drive to work.

It was a Sunday morning, and I was catching up on my field notes. I think I wrote: “I'm feeling really lucky that we're going to make a major discovery,” because we were in the process of training our eyes, training our collectors. One of our Ethiopian colleagues had found several jaws in the early days of that 1974 expedition, and I had a sense that it was going to be a very important field season.

Yet I didn't want to go to the field that day, but my graduate student encouraged me to go with him, because we had to do some mapping of fossils. So we went out to survey for a couple hours. Walking back to our car, I glanced over my shoulder and spotted this funny little elbow bone that we had missed in the morning, and it immediately said hominid to me. It didn't look like a monkey, it certainly wasn't any kind of small antelope, and when I examined it more closely, I could see it was from a human ancestor. It was very small. And then, to my great surprise and reward, I looked up the slope and there were fragments of the skeleton eroding on this little hillside.

We saw a bit of leg bone and a little bit of jaw. But it was over the next two weeks that most of the skeleton was recovered. We were disappointed that the cranium had eroded out earlier, and all we had was a pretty good chunk of the occipital bone, enough to give us at least a ballpark view that this was pretty small-brained. But she was marvellous as she began to be pieced together in camp over those two weeks. You could see her coming to life.

What was the mood in camp?

Everybody was just thrilled and galvanized by this discovery. What amazed me was how quickly she picked up her nickname. I had a Beatles tape playing the night we celebrated her discovery. It is true that “Lucy in the Sky with Diamonds” was playing. This woman just suggested calling her Lucy, but it was kind of a throwaway line. I didn't really concentrate on it. But by breakfast the next morning, everyone was saying “Are we going back to the Lucy site?”, “Do you think we'll find more of Lucy's skull?” and so on.

What made Lucy so important?

She told us a lot about bipedalism: that changes in the foot, the ankle, the knee and the hip happened well before Lucy, because the biomechanics of bipedalism in afarensis are virtually identical to our own. I think she was also very important because she drew attention to an entirely new segment in the Great Rift Valley, one that had been overlooked for so long because of its remoteness. She was a real catalyst for field workers.

How has your understanding of Lucy changed in the last 40 years?

I think that we realized that there are certain features in her skeleton that were left over from her arboreal ancestry. While we were closed to that idea in the 1970s, we realized that probably Lucy and her species did spend some time in the trees. With the discovery of Australopithecus afarensis at other sites — her species is known by over 400 specimens now — it showed they lived in a geographically widespread area. There were probably a variety of habitats, which reflects some level of adaptability in this species that contributed to its long-term survival.

Have you ever tried to imagine the life that Lucy led?

On my first visit to Gombe [Gombe Stream National Park in Tanzania, where Jane Goodall studied wild chimpanzees] about six years ago, I was on a trail by myself with a guide, and two female chimps came knuckle-walking by with babies on their backs. They were 2 feet [60 centimetres] from me. I began to think, how did Lucy carry her baby? Did she live in an environment like this? She lived in a troop maybe of 25 or 30 individuals. Did they make nests? I saw a nest that chimps make to sleep in. It all gave me a sense of the fossils coming to life.

The greatest fantasy that I have is: wouldn't it be fantastic if there had been visitors to our planet who came here 3.2 million years ago on a visit and shot video of what these creatures looked like?

I don’t know what it is about the name Lucy, but it's easy to remember. Children really gravitate towards this affectionate name she has, and that generates the view that this was an individual, that this was some person who actually lived. Perhaps even the fact that she's a female — we've been biased for so many years talking about  'evolution of man'. And she’s a touchstone and a centrepiece for the average person who is interested in answering that question that they've asked probably since they were a child: where did I come from? Lucy is that kind of ancestor that people like to identify with.