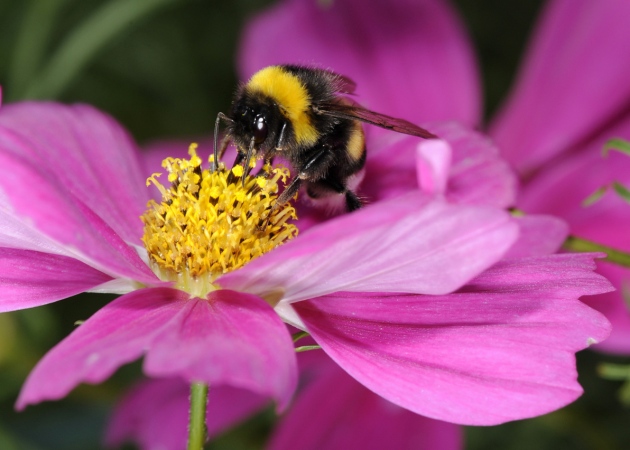 With one of their competitor species gone, bumblebees were less selective about which flowers they visited, but the flowers ended up carrying one-third fewer seeds.

Removing even a single bee species from an ecosystem has serious effects on plant reproduction, a field study1 has shown.

Wild bee populations are declining severely in the United Kingdom and the United States2, possibly because of pesticide use, yet simulations have predicted that the insects’ decreasing numbers will not have a major effect on plant reproduction until most pollinating species are gone3.

Wielding his butterfly net, ecologist Berry Brosi of Emory University in Atlanta, Georgia, set out to test these models in the field with his colleague Heather Briggs from the University of California, Santa Cruz.

Brosi and Briggs prepared 20 plots of land, each the size of a tennis court, in the foothills of the Rocky Mountains in Colorado. They first monitored the plots in their natural state, identifying the most abundant species of bumblebee (of the genus Bombus) in each. With help from volunteers, they then painstakingly caught the bees belonging to this group with nets and removed them.

The researchers counted how many different species of plant the bumblebees visited, studying 736 individual insects in total. They also carefully caught bees as they were pollinating the flowering plant Delphinium barbeyi (a type of larkspur) and anaesthetised them, recording the different types of pollen they were carrying.

Writing in Proceedings of the National Academy of Sciences1, Brosi and Briggs find that after they removed the dominating bumblebee species from a given plot, the other bee species were less fussy — as shown by the broader variety of pollen they were carrying. The number of bees carrying at least two types of pollen increased by 17.5%.

The fact that bees became less picky could be of concern, because plants can only be fertilized by pollen from their own species. Indeed, the researchers found that after their bee-removal operation, fewer flowers received their own type of pollen. As a result, each flower produced one-third fewer seeds on average.

“This is a spectacularly interesting study,” says ecologist Jane Memmott of the University of Bristol, UK. Memmott was a co-author of the simulation studies that the latest work contradicts, but she says that she is happy to be proved wrong.

“We were having a first go with our network simulations; these didn’t incorporate any dynamic relationships because that’s hard to do,” she says. “Now we have this proof, the theory needs to catch up with the observations.”

But Memmott also notes that the latest study did not look at a whole ecosystem, and so should not serve as a basis for sweeping statements. Brosi's study measured seed production only in larkspur — a plant that is pollinated by several species of bumblebee. Memmott says that it would also be interesting to see what removing bees does to other plants, as well as to pollinators other than bees.

Brosi says that his work adds weight to the argument that society should be more active in protecting pollinators. In the United States, “it seems to me like a pesticide is safe until proven otherwise”, he says. But given the sensitivity of plants to the removal of pollinators “it might be time to re-think those sorts of policies”.