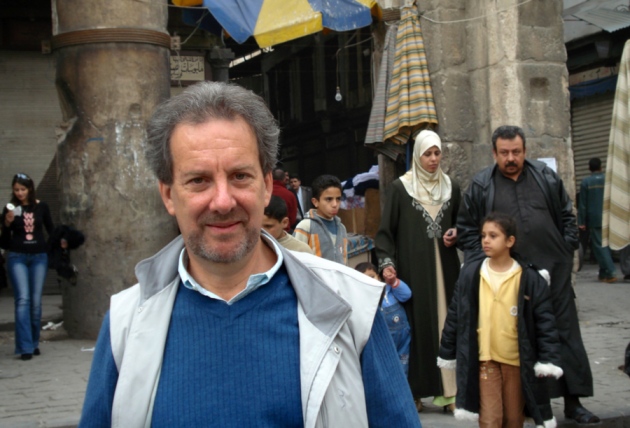 Scott Atran during a visit to Damascus to conduct fieldwork.

In the wake of terrorist attacks last week on the French satirical magazine Charlie Hebdo and a Paris supermarket, the world has struggled to understand the combination of religion, European culture and influence from terrorist organizations that drove the gunmen. Scott Atran, an anthropologist at the University of Michigan in Ann Arbor and the Centre National de la Recherche Scientifique in Paris, studies such questions by interviewing would-be and convicted terrorists about their extreme commitment to their organizations and ideals. Atran recently returned from Paris, where he talked with members of the shooters’ communities. He spoke with Nature about what he discovered.

What sociological and cultural factors are behind the Paris attacks?

Unlike the United States, where immigrants achieve average socioeconomic status and education within a generation, in Europe even after three generations, depending on the country, they’re 5–19 times more likely to be poor or less educated. France has about 7.5% Muslims and [they make] up to 60–75% of the prison population. It’s a very similar situation to black youth in the United States.

The difference is here’s an ideology that appeals to them, it’s something that’s very attractive to more people than you might think. In France, a poll by [ICM Research] showed that 27% of young French people, not just Muslims, between 18 and 24 had a favourable attitude toward the Islamic State. The jihad is the only systemic cultural ideology that’s effective, that’s growing, that’s attractive, that's glorious — that basically says to these young people, “Look, you're on the outs, nobody cares about you, but look what we can do. We can change the world.”

And of course they are. These three lowlifes, they managed to capture the entire world’s attention for the better part of a week. They mobilized all of French society. That’s a pretty good cost–benefit for the bad guys.

So is this a ready-made population for groups such as the Islamic State and Al Qaeda to recruit from?

It’s not about recruitment, it’s about self-seekers. The Islamic State and Al Qaeda don’t directly order commando operations. Basically they say, “Hey guys, here are ideas, do it yourself. Here’s the way to make a pressure cooker bomb; here are likely targets that will terrorize people; here are things we hate. Go out and do it.”

Do the terrorists you study seem to have fit this pattern?

I talked to people in the neighbourhood where the [9/11 pilots] came from, their families. They didn’t know what the hell they were doing. They were guys who worked at a technical university, they sort of hooked up, went to mosque together, got an apartment together, wanted to do something together. They dragged in mattresses, they watched videos. Neighbours told us the place stank because they never went out of the apartment.

None of this was carefully planned. But the [attacks] we remember, the ones that work, they pick carefully planned targets. The attacks on the [World Trade Center] and Pentagon, these shook America to the core. In Madrid, [when a set of train bombings in 2004 killed 191 people] they changed the government. But they're petty criminals with a little bit of training.

It’s the organized anarchy of it that does more to terrorize than actually carefully planned commando operations. Of course, a lot more of these guys are now heroes. They're going to be models for other guys.

Can anything be done to predict extremist attacks?

I think people want to be able to predict, to have surety. [But] it wouldn’t help if you knew about every single [foiled] plot in terms of being able to predict it. The fact is that anybody at any time anywhere can start to make their own network with their friends. It’s like when you boil water, when the cones rise up, you don’t know which will boil first and pop. Complexity theory is not good for modelling these things. You’ll never be able to predict with certainty.

It depends on the poll, but 7–14% of Muslims worldwide supported the Al Qaeda strike against the United States. If something like that support the Islamic State, that’s a lot of people, [over 100] million. But who is actually willing to fight and die? There is a problem of specificity. Even if people buy into the ideology, buy into the values, it’s far from a sufficient condition.

The best predictors turn out to be things like who your friends are and whether you belong to some action group. In the case of the Kouachi brothers [who committed the Charlie Hebdo attack], we had the greatest bonding experience and that is prison. But it could be soccer, it could be whitewater rafting.

If you want to find out who's going to fight and die, if you want to break up a particular terrorist cell, find out what they’re eating and how they dress. Plots never occur in mosques: you have to be quiet in a mosque. They occur in fast food places, soccer fields, picnics and barbeques.

Why aren’t more people doing anthropological fieldwork, such as interviewing jihadis and their families?

The problem is you can't have large samples. The insights you get can't come from surveys. They have to come from in-depth field interviews and very tightly controlled experiments.

If you really want to do a scientific study with jihadis — I do it — you have to convince them to put down their guns, not talk to one another, and answer your questions. Some people, if you ask them if they would give up their belief in God if offered a certain amount of money, they will shoot you. So you can't ask that question.

It’s not just because it’s dangerous. It’s because human subjects reviews at universities and especially the [US] defence department won't let this work be done. It’s not because it puts the researcher in danger, but because human subjects [research ethics] criteria have been set up to defend middle class university students. What are you going do with these kind of protocols when you talk to jihadis? Get them to sign it saying, “I appreciate that the Defense Department has funded this work,” and by the way if you have any complaints, call the human subjects secretary? This sounds ridiculous and nothing gets done, literally.

Have you run into such difficulties with your fieldwork?

As an example, I got permission, before the [three] Bali bombers [who carried out a set of simultaneous attacks in 2002] were executed, to interview them. They were going to be shot because they blew up 200 people. I couldn’t get human subjects approval because “you have to bring a lawyer, and besides we won't allow anyone to interview prisoners.” I said why? “You can never be sure you're not violating their right to speech.”

Then you have crazy things [required by US funding bodies] like host country authorization. Suppose you want to do work in Israel and Palestine. So you go to the Israelis, say, “We want to do studies, just like we do in American universities,” and say, “We need host country authorization from some government.” They say, “Are you crazy?” And in many countries that are in chaos, who’s going to give you permission?

The third question originally seemed to be specific to the Paris attacks, but in fact was talking about the 9/11 attacks. The text has been edited to make this clear.