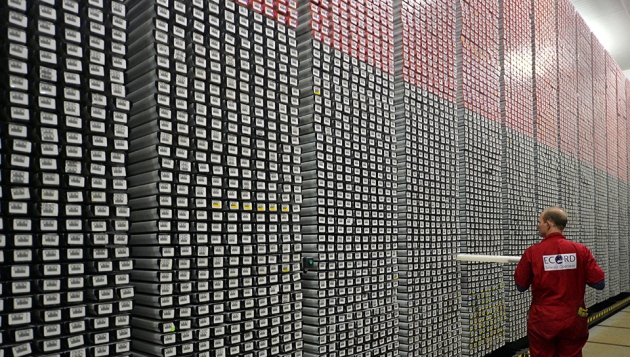 Researchers use tools such as ocean sediment cores, seen here at a German storage facility, to help reconstruct past climates.

A global temperature record published on 26 September in Nature1 extends 2 million years into the past — the longest continuous log yet published — and has sparked debate about how Earth's climate will change in the future.

The study harnesses data from dozens of ocean-sediment cores, as well as climate models, to provide estimates of global average surface temperatures. Prior reconstructions have gone back further — in some cases back to 3 million years — but were less comprehensive or focused only on particular time periods. The longest comprehensive temperature record available before this study went back 22,000 years.

“It’s a useful starting place,” says lead author Carolyn Snyder, director of the Climate Protection Partnerships Division of the US Environmental Protection Agency in Washington DC. “People can take this and improve upon it as more records become available in the future.”

Using a subset of the reconstructed temperature data, Snyder, who began the study while at Stanford University in Palo Alto, California, analysed the relationship between past temperatures and carbon dioxide (CO2) levels estimated from Antarctic ice cores covering the past 800,000 years. Based on that analysis, she found that future long-term warming induced by greenhouse gases could be more severe than many previous estimates.

Even if the amount of atmospheric CO2 were to stabilize at current levels, the study suggests that average temperatures may increase by roughly 5 °C over the next few millennia as a result of the effects of the greenhouse gas on glaciers, ecosystems and other factors. A doubling of the pre-industrial levels of atmospheric CO2 of roughly 280 parts per million, which could occur within decades unless people curb greenhouse-gas emissions, could eventually boost global average temperatures by around 9 °C. This is on the high end of existing estimates.

And this is where the study has encountered scepticism. “The key part of this paper is the temperature reconstruction, which is really valuable,” says Eelco Rohling, a palaeoclimatologist at the Australian National University in Canberra. But he adds that the question of how the planet will respond to atmospheric CO2 over the long term requires more detailed analysis.

In particular, the study fails to account for subtle changes in Earth’s orbit that affected global temperatures and helped to drive the expansion and retreat of glaciers throughout the time period covered by the analysis, says Gavin Schmidt, director of NASA’s Goddard Institute for Space Studies in New York City. He says the effects of such orbital variations must be considered when comparing the glacial era to the present.

Schmidt's research into Earth's long-term sensitivity to CO2 has focused on a warmer era before the glacial ages, about 3 million years ago. That work suggests that the millennial-scale warming that would be expected from rising greenhouse gases is around 4.5 °C for a doubling of pre-industrial atmospheric CO2 levels2.

Snyder isn't convinced that the orbital effects are that important in this case. She says her study provides a single measure of the relationship between historic temperatures and CO2 levels. If that relationship were to hold up, it would suggest that the Earth is in store for even more warming in the future. But she stresses that conclusions about future climate change should be viewed with caution. “This is not an exact prediction or a forecast,” she says. “The experiment we as humans are doing is very different than what we saw in the past.”

Although Snyder’s temperature record will probably be improved as new data are incorporated in the future, the study fills a crucial gap in the archives of climate science, says Jeremy Shakun, a geologist at Boston College in Chestnut Hill, Massachusetts, who developed the previous temperature record out to 22,000 years.

“This is something that just needed to be done,” Shakun says. As for the debate about long-term climate sensitivity, he says scientists can debate the details, but it’s clear that heat will continue to build up in the Earth system for a very long time.