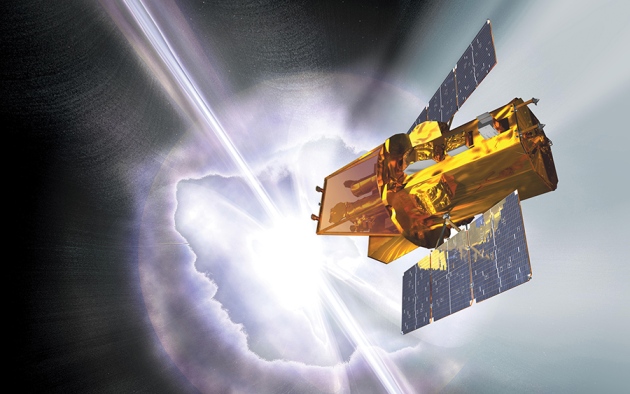 The Swift spacecraft (artist's rendering) detected a flash of gamma rays that is correlated with a Fast Radio Burst.

What causes split-second blasts of radio waves that appear in the sky from billions of light years away is one of the most perplexing mysteries in astronomy. Now, for the first time, astronomers have seen a flash of high-energy γ-rays that looks as if it was emitted by the same event that produced a fast radio burst (FRB) — a correlation that was predicted to help whittle down the zoo of possible explanations for the origin of FRBs.

“If FRBs have γ-ray counterparts, it would be hugely constraining of models and extremely interesting,” says Victoria Kaspi, an astrophysicist at McGill University in Montreal, Canada.

But as well as exciting astronomers, the nature of this particular finding offers no clear answers and deepens the FRB riddle. “The association, should it turn out to be true, is an entirely unexpected and astonishing development,” says Shri Kulkarni, an astronomer at the California Institute of Technology in Pasadena.

The γ-ray signal, described in a paper published on 11 November in The Astrophysical Journal Letters1, turned up in data from a NASA orbiting γ-ray observatory called Swift. A team from Pennsylvania State University (Penn State) in University Park found that a γ-rays flare at around the same time and from the same direction as FRB 131104, a burst named for the date it was seen by the Parkes Observatory radio telescope in Australia, on 4 November 2013.

One puzzle is that the two signals portray different pictures of the underlying source, which seems to be as much as 10 billion light years (3.2 gigaparsecs) away. Whereas the radio burst lasted just a few milliseconds, the γ-ray signal lasted between two and six minutes, and it released much more energy in total than the radio burst. “We’ve pumped up the energy budget more than a billion times,” says study co-author Derek Fox, an astrophysicist at Penn State.

This has big implications for the FRB’s origin. One leading theory suggests that FRBs are flares from distant magnetars — neutron stars with enormous magnetic fields that could generate short, energetic blasts of energy, and do so repeatedly, as at least one FRB is known to do. Although magnetars are thought to produce γ-rays, they would not emit such high energy and over such a long time, says Fox. “This is a severe challenge for magnetar models,” he says.

Instead, the γ-ray signal resembles events that Swift has observed previously, which scientists identified as either a shock-wave blast from a supernova or a surge in radiation from a supermassive black hole as it swallowed a star, says Fox. The problem with both of these options is that neither is expected to produce radio bursts.

Another possibility is that both the γ-radiation and radio burst came from a collision between neutron stars. But if that is true, it would not offer an explanation for all FRBs: colliding neutron stars are thought to be relatively rare, whereas estimates suggest that FRBs are common, occurring around once every ten seconds somewhere in the sky. (Astronomers have so far detected only around 20 FRBs, largely because radio telescopes usually only look at small patches of sky). Fox notes that there are already hints that FRBs could be generated by more than one type of source.

Many astronomers also need convincing that the FRB and the γ-ray signal detected by Swift come from the same source. Statistically, the chance that the γ-ray burst would occur at the same time and from the same place as the FRB by pure chance, if there were no real association, is just 1 in 800, says Fox. And there is not any other known source in that direction that could produce the γ-ray burst, he adds.

Although such a result would usually pass the statistical threshold needed to conclude that the two signals are produced by the same source, Kaspi says that the finding is so unprecedented that more evidence is needed. “Extraordinary claims demand extraordinary evidence,” she says.

Kulkarni is also cautious. “The association could be due to chance coincidence of a blip in the γ-ray sky with a single FRB,” he says. “We would definitely need a few more such associations to take this hypothesis seriously.”

Fox hopes to find more. As new and existing telescopes begin to hunt for FRBs, the number of known bursts should rise from the current count of around 20 to more like 200. If that happens, Swift should be able to check more than a dozen of these locations for correlated γ-ray bursts using the centre of its field of view.

Detecting γ-ray signals centrally would produce more statistically significant results than for FRB 131104, which was picked up at the edge of the telescope’s field of view, where noise can more easily mimic signals. And this, in turn, would increase scientists’ certainty that a signal’s correlation with an FRB is not just due to chance. “Then the confidence level would be one in a billion,” says Fox.