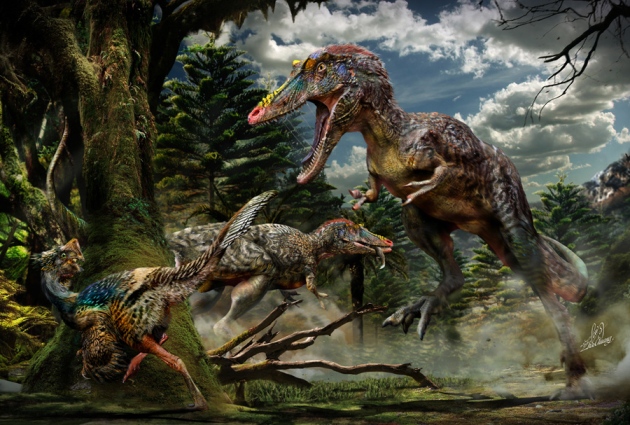 Qianzhousaurus sinensis measured about 9 metres from nose to tail.

Not all tyrannosaurs had short, brutish faces like that of Tyrannosaurus rex. Palaeontologists in China have unearthed the remains of a slender, long-snouted tyrannosaur — and nicknamed it 'Pinocchio rex' for its impressive nose.

Earlier discoveries had hinted at tyrannosaurs with elongated snouts. The new finding confirms that not only did they exist, but that they make up an entirely new class of dinosaurs.

Pinocchio rex “tells us pretty unequivocally that these long-snouted tyrannosaurs were a real thing”, says Stephen Brusatte, a palaeontologist at the University of Edinburgh, UK. “They were a different breed, living right at the end of the age of dinosaurs.”

Brusatte and his colleagues, led by Junchang Lü of the Chinese Academy of Geological Sciences in Beijing, report the finding today in Nature Communications1.

Pinocchio rex is formally known as Qianzhousaurus sinensis, which is derived from Qianzhou, the ancient name of the city of Ganzhou in southern China. Workers there unearthed the bones at a construction site and sent them to the local museum. The fossils constitute most of a single animal that lived more than 66 million years ago, including a well-preserved skull, neck, backbone and tail. “Almost the entire anatomy is there, which is really rare for a new tyrannosaur,” says Brusatte. 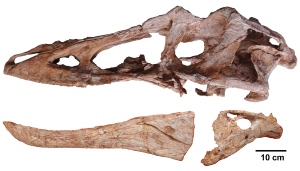 Qianzhousaurus sinensis' snout makes up about 70% of the length of its skull.

Notably, the dinosaur’s snout makes up about 70% of the length of its skull, which is similar to the proportions seen in Mongolian fossils of two species of Alioramus2. Palaeontologists have been unsure what to make of the Alioramus fossils because both specimens came from juvenile animals, leading some scientists to suggest that Alioramus had a long, narrow snout in its childhood and adolescence but a wider snout as an adult. The Qianzhousaurus fossil belongs to an adult, thus confirming that some full-grown tyrannosaurs did possess elongated snouts.

In life, Qianzhousaurus would have measured up to 9 metres from nose to tail — not quite as big as a T. rex, and therefore more agile, says Brusatte. It may have been the top predator of its time.

The long snout of Qianzhousaurus would have given it different feeding strategies from the muscular T. rex, says Thomas Williamson, a palaeontologist at the New Mexico Museum of Natural History and Science in Albuquerque. Qianzhousaurus probably could not muster the extreme bite forces that T. rex used to puncture bone. Instead, the long-snouted tyrannosaurs would “probably cut up their prey with their smaller, more numerous, and more blade-like teeth”, says Williamson.

The discoveries of Qianzhousaurus in China and Alioramus in Mongolia suggest that dinosaurs in Asia had subtle but important differences from their cousins in North America, says Brusatte. No long-snouted tyrannosaurs have been found in the Americas.