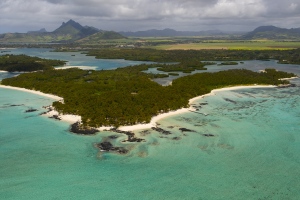 The beaches of Mauritius contain fragments of a type of rock typical of ancient continental crust — rock which could have been brought to the surface by volcanic eruptions.

The drowned remnants of an ancient microcontinent may lie scattered beneath the waters between Madagascar and India, a new study suggests.

Evidence for the long-lost land comes from Mauritius, a volcanic island about 900 kilometres east of Madagascar. The oldest basalts on the island date to about 8.9 million years ago, says Bjørn Jamtveit, a geologist at the University of Oslo. Yet grain-by-grain analyses of beach sand that Jamtveit and his colleagues collected at two sites on the Mauritian coast revealed around 20 zircons — tiny crystals of zirconium silicate that are exceedingly resistant to erosion or chemical change — that were far older.

The zircons had crystallized within granites or other igneous rocks at least 660 million years ago, says Jamtveit. One of these zircons was at least 1.97 billion years old.

Jamtveit and his colleagues suggest that rocks containing the wayfaring zircons originated in ancient fragments of continental crust located beneath Mauritius. They propose that geologically recent volcanic eruptions brought shards of the crust to Earth’s surface, where the zircons eroded from their parent rocks to pepper the island’s sands. The team's work is published today in Nature Geoscience1.

The paper also suggests that not just one but many fragments of continental crust lie beneath the floor of the Indian Ocean. Analyses of Earth’s gravitational field reveal several broad areas where sea-floor crust is much thicker than normal — at least 25 to 30 kilometres thick, rather than the normal 5 to 10 kilometres.

Those crustal anomalies may be the remains of a landmass that the team has dubbed Mauritia, which they suggest split from Madagascar when tectonic rifting and sea-floor spreading sent the Indian subcontinent surging northeast millions of years ago. Subsequent stretching and thinning of the region’s crust sank the fragments of Mauritia, which together had comprised an island or archipelago about three times the size of Crete, the researchers estimate.

The team chose to collect sand, rather than pulverize local rocks, to ensure that zircons inadvertently trapped in rock-crushing equipment from previous studies did not contaminate their fresh samples. The nearest known outcrop of continental crust that could have produced the Mauritian zircons is on Madagascar, far across a deep sea, Jamtveit notes. Furthermore, the zircons came from Mauritian sites so remote that it is unlikely that humans carried them there.

“There’s no obvious local source for these zircons,” says Conall Mac Niocaill, a geologist at the University of Oxford, UK, who was not involved in the research.

Also, it does not seem as if the zircons rode to Mauritius on the wind, says Robert Duncan, a marine geologist at Oregon State University in Corvallis. “There’s a remote possibility that they were wind blown, but they’re probably too large to have done so,” he adds.

Other ocean basins worldwide may well host similarly submerged remains of “ghost continents”, Mac Niocaill notes in an accompanying News & Views article2. Only detailed surveys of the ocean floor, including geochemical analyses of their rocks, will reveal whether the splintered and now submerged Mauritia has any long-lost cousins, he suggests.