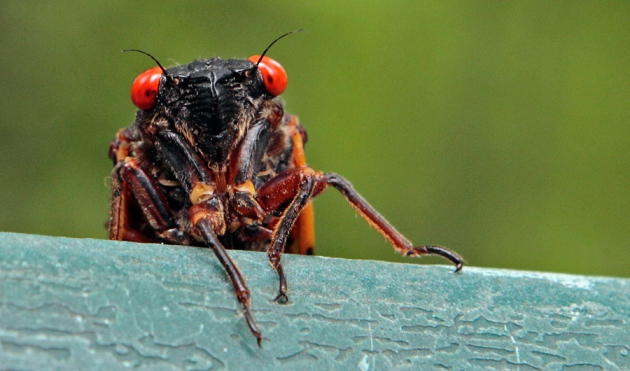 Periodical cicadas emerge in broods of up to 350 insects per square metre.

Drivers who end up behind John Cooley this week will quickly lose their patience. Cruising around the eastern United States with his car window open, he slows down or stops every few hundred metres, cocks an ear and taps on a data-logger strapped into the passenger seat.

Since last week, Cooley, an evolutionary biologist at the University of Connecticut in Storrs, has been on the road mapping populations of periodical cicadas (Magicicada). These loud, red-eyed insects have spent the past 17 years maturing underground, only to emerge this month by the billions for a few weeks of singing and sex before they die. Like a handful of other cicada researchers on the prowl from North Carolina to New York, Cooley knows that he has to work quickly. “Time is the real enemy here, for both the cicadas and the researchers,” he says. “If you miss this opportunity, you have a hole in your map and you have to wait for another 17 years.”

The insect genus with the longest known life cycles, Magicicada has confounded scientists for centuries. In 1665, the first volume of Philosophical Transactions of the Royal Society included a report from New England concerning “swarms of strange insects, and the mischiefs done by them”. Charles Darwin also puzzled over them. Even now, entomologists are trying to understand how the insects’ peculiar life cycles evolved, how they count the years underground and how they synchronize their schedules. “They are one of the big ecological mysteries out there,” says Walt Koenig, a behavioural ecologist at the Cornell University Lab of Ornithology in Ithaca, New York.

They are also an entomological rarity. Of the thousands of cicada species known around the world, only the seven Magicicada species, which live in the eastern and central United States, have evolved such prolonged and synchronized life cycles (see ‘A frenzied horde’). At the southern end of their range, Magicicada populations have split into three mixed-species broods that emerge every 13 years. In the northern region, 12 broods follow 17-year cycles. This year’s crop belongs to Brood II, one of the larger 17-year groups and one that emerges in major metropolitan regions on the east coast. 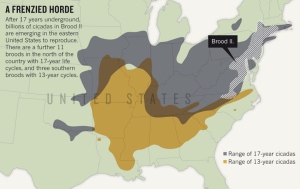 Since their last outing in 1996, Brood II cicadas have grown through five larval stages underground, where they survived by sucking fluids from tree roots. With the warm weather this month, the nymphs have been crawling out of the ground before moulting for one last time and taking wing. Reaching densities of up to 350 individuals per square metre in woodlands, the cicadas can chorus at more than 95 decibels — loud enough to harm human hearing — as the males woo the females. After mating, the females cut slits into tree branches and lay their eggs there. By the time the eggs hatch, in six to ten weeks, the ground will be littered with the bodies of their parents. The new generations of nymphs will fall to the ground, burrow into the soil and remain there until 2030.

Biologists generally agree that the giant synchronized emergence of periodical cicadas overwhelms potential predators, allowing some of the relatively defenceless insects to reproduce. And some researchers have proposed that the cicadas have evolved life cycles around prime numbers of years because that arrangement limits the chances that predators will synchronize with the cicadas. But these ideas do not address why the generations specifically last for 13 or 17 years.

Koenig suggests that the answer may involve interactions with birds. He and Andrew Liebhold of the US Forest Service in Morgantown, West Virginia, analysed 45 years of data from the North American Breeding Bird Survey (W. D. Koenig and A. M. Liebhold Am. Nat. 181, 145–149; 2013) and found that bird populations tend to fall during the years in which periodical cicadas emerge. Birds feed on cicadas, so Koenig expected to find the opposite pattern. He proposes that the masses of cicadas trigger long-term changes in the forest that end up causing bird populations to crash after 13 or 17 years. The mechanism remains a mystery, but Koenig notes that one factor could be the flood of dead cicadas, whose bodies are 10% nitrogen. The die-off sends a pulse of fertilizer into the forest that temporarily enhances plant growth but could later lead to unfavourable conditions for birds. “It’s a pretty weird hypothesis,” he admits. 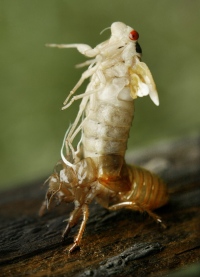 A cicada moults for the last time before taking wing.

To synchronize their emergence, the nymphs must somehow keep track of how long they have been underground. Gene Kritsky, an entomologist at the College of Mount St. Joseph in Cincinnati, Ohio, says that nymphs seem to count the number of times that trees set their leaves in the spring; in 2007, some Brood XIV cicadas emerged a year early, following a strong winter thaw during which trees produced leaves, then dropped them and grew new ones in the subsequent spring. But no one knows how cicadas ‘remember’ the number of years since they last emerged.

Researchers are making more progress in probing the biological mechanisms that allow cicadas to switch their life cycles. In an analysis of DNA markers published this year (T. Sota et al. Proc. Natl Acad. Sci. USA 110,6919–6924; 2013), a team including Cooley developed an evolutionary tree for Magicicada and found that the major species groups had repeatedly split into 13-year and 17-year cohorts. The researchers suggest that those splits are explained by a common genetic mechanism across the species.

Chris Simon, a co-author and evolutionary biologist at the University of Connecticut, plans to follow up those results with several genetic studies, including sequencing the RNA transcripts of genes that are active at different stages in the cicada life cycle. She is particularly interested in probing the occasional tendency of periodical cicadas to emerge 4 years early or late. These ‘stragglers’ are easy prey so do not usually survive, but Simon and others suggest that the timing mistakes might have given rise to new broods in the past. “It’s a way of having instant speciation,” she says. “This ability to jump through time is something that has not been seen before in other organisms.”

One example of this time travel might be happening right now in north-central Cincinnati, at least 500 kilometres from Brood II’s range. Kritsky documented thousands of cicadas appearing last week in a spot where he saw stragglers in 2000, four years before the city was inundated with the expected 17-year cicadas of Brood X.

The arrival of cicadas in the same place this year might mean that an environmental change such as global warming is causing them to emerge early, or that a genetic factor has caused some members of the 17-year Brood X to switch to a 13-year life cycle, says Kritsky. He must wait another 4 years to see whether some of the stragglers from 2000 have reverted back to their 17-year schedule. The main pulse of Brood X will arrive in 2021.

By then, Kritsky will be 68 years old. The long generations of the periodical cicadas makes studying them difficult, he says. “You would think we’d have a lot of answers but we don’t. Very few researchers have seen five generations.”