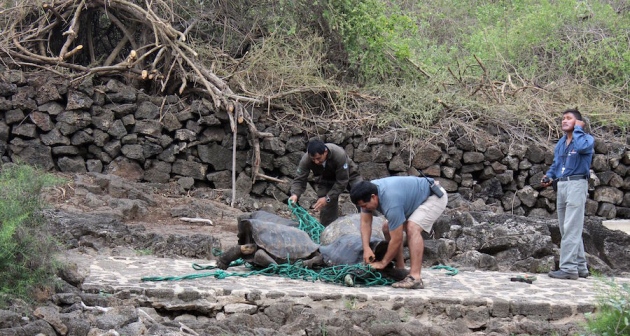 Hybrid tortoises captured from Wolf volcano, on Isabela Island in the Galapagos.

Conservationists have captured two Galapagos Island tortoises related to Lonesome George, the iconic tortoise that died in 2012 and was thought to be the last of his species.

The legacy of Lonesome George

The tortoises, a male and a female, are not close relatives of George, but they share some genes of his species. Airlifted along with thirty other tortoises from a volcano on the island of Isabela — some 70 kilometres away from George’s birthplace on Pinta Island — they have now been shipped to Santa Cruz Island. Researchers hope to use them in a breeding programme that might one day found a new Pinta population.

The male tortoise looks just like George, says Adalgisa Caccone, a geneticist at Yale University in New Haven, Connecticut, who took part in the expedition, run by the Galapagos National Park (GNP), to find the tortoises. “You could feel the excitement of the rangers and all the park and station people that were around when the tortoises started arriving,” she says. “When one ranger saw the male with Pinta ancestry, he almost choked — he thought it was Lonesome George!”

The search for hybrids

George was the last of the Pinta Island tortoises (Chelonoidis abingdoni), but he has relatives living around Wolf volcano on Isabela, according to the results of some 1,700 blood samples taken by geneticists during several expeditions to the site over the past decade. The area is unique in the Galapagos because it is home to tortoises of mixed ancestry, a development thought to result from whalers and sailors moving animals between islands in previous centuries.

No purebred Pinta tortoise has yet been discovered on Wolf volcano, but some 17 tortoises with Pinta genes have been found — including one, announced in 2007, with a Pinta father and an Isabela mother. The latest expedition, which took place on 18–27 November, aimed to bring back some of these animals as well as tortoises that carry genes typical of the Floreana species (Chelonoidis elephantopus), which is assumed to have gone extinct in the mid-nineteenth century.

Selecting the correct tortoises from the slopes of the volcano was hard: the 50-strong team had to combat heavy rain, thick vegetation and a slippery, unstable lava field. “There must be more than 10,000 tortoises on those slopes,” says Caccone. Some tortoises had been tagged in previous expeditions so that — if spotted — their identities could be verified using a handheld scanner. 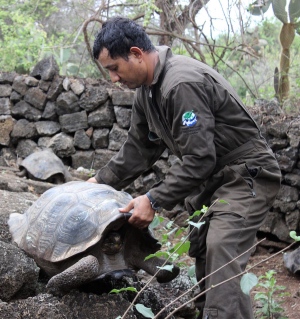 Thirty-two tortoises were airlifted by helicopter to a waiting ship — “the maximum we could fit in the boat safely”, says Caccone. Two are Pinta-like, and five have a genetic link to the Floreana species. The others did not have identity tags and have not yet been analysed, but they were chosen because they have the saddleback, curved shell that is characteristic of both Pinta and Floreana tortoises; this feature makes it “very likely” that they have genetic material from one of the two extinct species, Caccone says.

Genes for the future

All the tortoises are now at the Fausto Llerena Breeding Center in Santa Cruz; the females are kept in the corral that housed Lonesome George, and the males are in another enclosure. “The first thing is that they must comply with all quarantine procedures,” says Washington Tapia, a researcher for the Galapagos Conservancy in Fairfax, Virginia, and formerly director of conservation and sustainable development for the GNP. Then, he says, “we are ready to start the breeding program and rearing in captivity of these species”.

The plan is to concentrate rare Pinta or Floreana genes into future generations of tortoises that could then be reintroduced to their ancestors’ native islands. The process could take more than 50 years and involve 4 or 5 generations, says Caccone, but it could be sped up if some of the saddleback-shelled tortoises now captured turn out to have Pinta or Floreana genes.

And hundreds more saddlebacks still roam Wolf — animals that are likely to be the focus of future expeditions.

“We are grateful and very excited that we have at least two animals with genetic material from the species from Pinta,” Caccone says. “We had nothing before: just the sorrow to have recently lost the last one.”