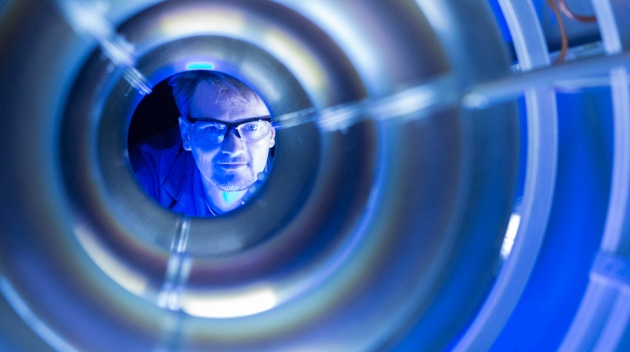 Lockheed Martin formally entered the nuclear-fusion arena on 15 October, laying out a 10-year roadmap to commercialize a reactor that would fit on the back of a lorry. Research has been under way for several years at the defence contractor's Skunk Works division in Palmdale, California, but the firm has been very secretive about its results. Now, it has revealed a grandiose plan for harnessing nuclear energy, although outside experts are reserving judgement over the chances of success.

What is Lockheed Martin proposing to do?

The company currently has a roughly half-scale experimental device, and says that it is now gearing up to produce a compact 100-megawatt reactor. The small scale means that the team can design, build and test reactors in annual cycles, says project leader Tom McGuire. The goal is to have a prototype in five years that can sustain short-term reactions — lasting perhaps 10 seconds — and a commercially viable product that can compete with coal-fired power plants in 10 years.

What would it mean if the company succeeds?

By mimicking the stars and harnessing the energy that is released when hydrogen isotopes fuse into helium at high temperatures, the reactor could provide a virtually limitless supply of clean, climate-friendly power.

How does the technology differ?

The minimal information that has been released so far makes that difficult to determine. The bulk of the work on fusion today, including the international ITER project in southern France, focuses on the tokamak design, which uses multiple sets of electromagnets wound around a toroidal chamber to confine the hot plasma. McGuire says that his team has taken the best ideas from several designs and mashed them into a new compact design that uses electromagnets to confine the plasma within a more compact oval-shaped chamber.

What do the experts think?

Although nearly everybody is pleased to see an industrial giant such as Lockheed Martin jump into the fusion fray, academics remain sceptical. Lockheed has yet to release any data from its initial experiments. And without more details, nobody can work out how this design differs from predecessors that have been tried and abandoned in decades past.

“It’s hard to tell the man on the street anything from a scientific point of view,” says Stewart Prager, director of the Department of Energy’s Princeton Plasma Physics Laboratory in New Jersey. “It’s not clear what their science claims are.”

Why announce the plans now?

Lockheed Martin has applied for a number of patents, and McGuire says that this week’s announcement was intended to get out in front of that process and ensure that people have the right context when those patents come through. Moving forward, he says that the team will be publishing its results in peer-reviewed journals.

“This is going to be conducted in the open,” he says.

What challenges lie ahead?

The first challenge is to show that the reactor can contain the plasma at high enough temperatures and densities to generate a sustained fusion reaction that generates more energy than it consumes. McGuire calls this “the big Nobel-prize moment”. According to Lockheed’s schedule, that moment should arrive in five years' time.

Then it will be time to shift into materials and operations. These fusion reactions generate powerful neutrons, and the reactor must be able to not only withstand the damage they cause but also harness the heat that is released in the process to drive a generator. McGuire acknowledges that the team has a long way to go, but says that there is a clear stepwise path forward.

Having watched numerous breakthrough concepts tank during development, others are less sanguine.

“There are just so many questions in going from a small experiment to a power plant,” says Stephen Dean, president of Fusion Power Associates, an advocacy group based in Gaithersburg, Maryland. “One has to be extremely sceptical about whether the whole thing is going to hold up once all of the details come out.”