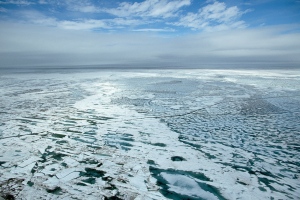 A 'test case' for how undersea deposits of methane — a greenhouse gas locked in sediments — might respond to climate change has been uncovered in the Arctic Circle.

The shallowest known deposit of methane hydrate — a crystalline solid comprising methane molecules trapped in an ice-lattice structure — has been discovered on the continental slope off Canada in the Beaufort Sea.

The trapped gas deposit is located in an area of small conical hills on the ocean floor just 290 metres below sea level. Before the discovery, the shallowest known marine gas-hydrate deposits were found in the Gulf of Mexico and in the vicinity of the Svalbard Islands at depths of around 400 m, says Charles Paull, a senior scientist at the Monterey Bay Aquarium Research Institute in Moss Landing, California, who presented the work on Thursday at the annual meeting of the American Geophysical Union in San Francisco, California1.

This particular deposit is only modest in size, but the methane trapped in such deposits represents an immense global carbon reservoir. Some experts fear that destabilization of such gas-hydrate deposits around the world — caused by changes in sea temperature or drilling, for example — could cause a release of methane into the environment and accelerate global warming.

At such a shallow depth, the newly discovered deposit is vulnerable to decomposition if there is even subtle warming of the overlaying water, says Paull.

The Arctic is thought to be undergoing some of the most dramatic effects of climate change anywhere in the world. And this particular deposit is just within what scientists call the ‘methane hydrate stability zone’, the range of pressure and temperature at which gas hydrates are stable. In this region, the stability zone begins at a depth of about 270 m, above which sea temperatures are too warm to ensure the methane remains locked in its water-molecule cage.

Because this deposit is small, the methane released by its decomposition would not substantially affect the Earth's climate, says Paull. However, the discovery could give some hints about, for example, how much methane could be released when a deposit begins to decompose as the sea warms.

"This is a great place to study what happens,” under such conditions Paull says.

Some climate scientists fear that gas-hydrate decomposition could also create geohazards — for example, by destabilizing the sea floor and causing landslides and accompanying tsunamis.

Timothy Collett, a research geologist at the United States Geological Survey in Denver, Colorado, says that the shallowness of the deposit means it could help researchers identify signs of future events. But he urged caution in speculating about potential geohazards that might result from decomposition of methane hydrate deposits. “We don't have proof in the geological record that any of that has ever happened before,” he says.

Paull is now planning a more detailed survey of the structure, along with another two identified in the same area but at deeper depths to better track any changes related to global warming.