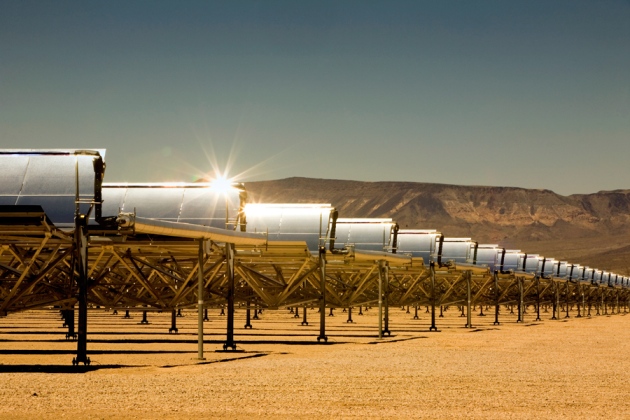 Placing solar plants in the sunniest locations may not always benefit human health and the environment the most.

Wind farms and solar installations are often located in places where they will have the least impact on climate and health, a report finds.

These renewable energies emit less carbon dioxide and air pollution than burning fossil fuels for electricity. But the windiest and sunniest places in the United States — such as the southwestern plains and deserts — are not always the most socially and environmentally beneficial sites for wind turbines and solar panels. The benefits, according to a study published today in Proceedings of the National Academy of Sciences1, vary depending on what energy sources are being replaced.

New wind and solar installations displace the most carbon dioxide and air pollutants where they replace the coal-fired plants found predominantly in eastern and Midwestern states such as Indiana and Pennsylvania. The benefits are much smaller in California and the US southwest, where cleaner gas-fired plants are more common.

“One would think it makes most sense to install the next solar panel in sunny California, because the solar resource is better there,” says Inês Lima Azevedo, an environmental engineer at Carnegie Mellon University in Pittsburgh, Pennsylvania, and a co-author of the study.

“But if we start thinking about the emissions that are displaced by adding that solar panel, the story is different: in Pennsylvania, one will be displacing old and dirty coal power plants and thus avoiding more health and environmental damages associated with the emissions from those plants.”

The team calculated the power-generation capacity of thousands of wind turbines and hundreds of solar panels across the United States and evaluated the corresponding health and environmental benefits. Assuming a social cost to the environment and human health of US$20 per tonne of carbon dioxide emitted, and $6 million per air-pollution-caused death, the combined climate and health benefits per megawatt hour used from electrcity produced by solar power range from about  $10 in Arizona, to $100, in some northeastern states, the researchers estimate.

As for wind energy, the overall health and environmental benefits in the United States amount to $2.6 billion per year. This is 60% more than the yearly US subsidy of $1.6 billion for wind power diffusion, the researchers say. But the US production tax credit — the main policy mechanism to induce wind-power development — encourages investors to seek sites with the highest energy output rather than those with high social benefits, says Lima Azevedo.

As a result, 30% of the 34,000 megawatts of wind capacity in the United States is installed in Texas and California, where social benefits are lowest, and less than 5% is in Indiana, Ohio and West Virginia, where wind power offers the greatest benefit from displaced pollution.

To maximize benefits for taxpayers, Lima Azevedo says, policy-makers should think about a subsidy scheme that encourages operators to build plants where they will yield the biggest health and climate gains. The easiest way to do that, she says, would be to price air-pollutant emissions at their source — the power plants.

The findings are “exceedingly interesting” and relevant for any nation weighing the costs and benefits of moving towards more wind and solar energy, says Nebojsa Nakicenovic, an energy-systems analyst at the International Institute of Applied System Analysis in Laxenburg, Austria. “This study clearly shows that, if installation sites are well chosen, the costs that some may feel worried about are in fact more than offset by avoided damages to human health and the environment.”