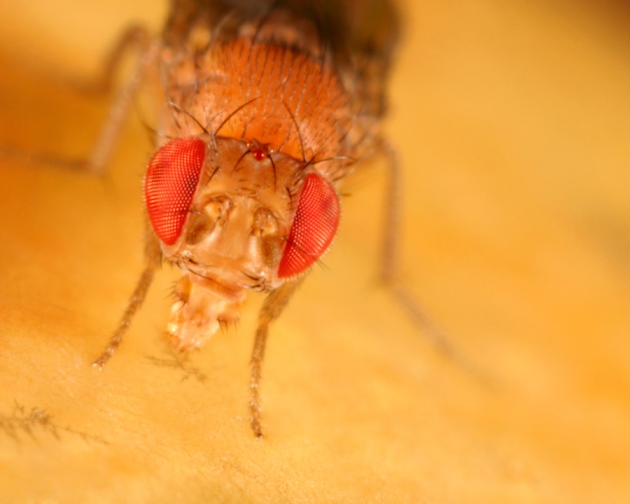 The fruit fly Drosophila melanogaster, the subject of the first paper to publish a living figure.

In July last year, neurobiologist Björn Brembs published a paper about how fruit flies walk. Nine months on, his paper looks different: another group has fed its data into the article, altering one of the figures.

The update — to figure 4 — marks the debut of what the paper’s London-based publisher, Faculty of 1000 (F1000), is calling a living figure, a concept that it hopes will catch on in other articles.

Brembs, at the University of Regensburg in Germany, says that three other groups have so far agreed to add their data, using software he wrote that automatically redraws the figure as new data come in.

His article, written with Julien Colomb, chief executive of the start-up firm Drososhare in Berlin, finds behavioural differences within a strain of fruit fly: the Canton Special, or CS strain (J. Colomb and B. Brembs F1000Research 3, 176; 2014). Although there are substrains, researchers usually regard CS flies as so similar that they do not distinguish between the substrains in their analyses, but Brembs and Colomb report that the flies exhibit three types of walking behaviour. This might betoken other differences in behaviour and therefore confound experiments in which CS flies are used as a control group, he says.

Having sequenced the genomes of the flies, Brembs thinks that the behaviours have a genetic origin and will not be explained away by environmental variations between labs. The addition of data by other labs could help to test whether his theory is correct.

The living figure concept fits within a central tenet of F1000’s publishing philosophy, that papers can be continually updated. The online-only open-access site publishes articles immediately with the status ‘Awaiting Peer Review’, then invites scientists to review them. Authors can then update their articles with new versions. The process is like adding pieces of paper to the top of an existing pile, the publisher says.

Allowing outside researchers to post their data into a paper simply takes the idea a step further, says Rebecca Lawrence, managing director of the publishing platform F1000Research. “The idea is that it better mirrors the way science is conducted,” she says. Other laboratories’ information confirms or challenges the published research in an incremental process. In addition to updating work, living figures may allow systematic reviews to be updated rather than published afresh each time, Lawrence adds. They should also help to address the issue of lack of reproducibility, she argues, because it provides a way for laboratories to release confirmatory data, which can be hard to get published.

“It’s a more accessible way for scientists to get the answer.”

Of course, by adding data to someone else’s article, scientists are giving up the chance to publish a paper of their own — a potential hurdle, because publications are the lifeblood of reputations in academia. But Gregg Roman from the University of Houston, Texas, the first outside author to add data to Brembs’s paper after publication, says that he accepts that. “We’re sacrificing a bit of recognition,” he says, but “it’s a more accessible way for scientists to get the answer than if we publish separately”.

New contributors’ names do, however, appear in the legend of updated figures; and the updated data set and paper get their own DOIs. Alternatively, contributors can choose to gain a formal publication by submitting what F1000Research calls a Data Note that links to the original updated paper.

If the new contributors’ methods or results differ significantly from the original paper’s, then they can publish a Research Note, Lawrence says. They can also request that the original authors update their article. An updated paper would be peer reviewed again.

Lawrence says that many research groups have shown interest in publishing living figures. And the concept could work with traditional pre-publication review, too, notes Peter Binfield, co-founder of the open-access journal PeerJ. “As long as the full version history of the article is available, and it’s clear which version of the article was reviewed, and in what way, it should be possible to publish updates,” he says.

As for Brembs’s work, Roman says that his data seem to support the general trend, but with smaller differences between the flies. The question may be resolved only as figure 4 evolves.