A video released by the Wildlife Conservation Society includes the sounds of an elephant being hunted and killed by poachers, as recorded by the Elephant Listening Project.

Poaching by its very nature happens out of sight and out of hearing of most people. But in the forests of Africa, someone is listening.

Last week, audio from the Elephant Listening Project was released, featuring the actual moment an elephant was killed by poachers (see video). The low-frequency recording, which sounds almost abstract, was captured by some of the special microphones set up by the project in the forests of Gabon and the Republic of Congo. The aim is to monitor the sounds that forest elephants use to communicate, which humans can sometimes feel but barely hear. 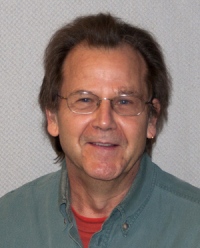 Nature interviewed behavioural ecologist Peter Wrege of the The Cornell Lab of Ornithology at Cornell University in Ithaca, New York, who directs the project, which is largely funded by the US Fish and Wildlife Service programme ‘Wildlife Without Borders’.

How does the listening project help elephant conservation?

For a species that uses acoustic communication, it is possible to monitor aspects of its ecology and behaviour by placing efficient recorders in multiple, remote locations where they can record for long periods of time without human presence influencing the animal's behaviour.

For example, other than counting dung piles along a transect to try to estimate population density, the only typical method of collecting data on forest elephants is by direct observation at clearings in the forest, measuring things like sex ratio, visitation frequency and reproduction. Although some of these measurements can't be made just from acoustic records — at least not yet — relative numbers of elephants and reproductive activity can be measured, and not just at clearings but anywhere.

And can it help to stop poaching?

In the area of [stopping] illegal hunting and poaching, we have made some important contributions. Acoustic methods allow us to directly measure the hunting pressure in a protected area because we are recording actual gunshots. We helped to expose, for example, that there was a lot more illegal hunting going on in Loango National Park in Gabon than had been thought, and this has given impetus to fielding an anti-poaching team in the most-at-risk parts of this protected area. 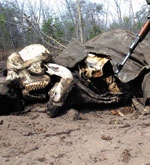 What’s the current state of the forest elephant population?

My impression is that the situation is very bad for forest elephants. Because the enforcement [against poachers] in savannah areas is better, we think that forest elephants are taking the brunt of ivory poaching more and more. Rainforests are difficult places to patrol and protect. I would say that all populations of forest elephants are in deep trouble, and the ones most at risk are those at the edges of their current range — in Cameroon and the Central African Republic. They are almost gone now from the Democratic Republic of the Congo, where once more than 60% of all forest elephants lived.

What role can science play?

I believe there are some fronts where science can be a big help. One would be much wider use of DNA sequencing of seized ivory — and fast-track analysis. Finding out quickly where a shipment of ivory really is coming from provides a way to pressure (and embarrass) the source government, and maybe target more enforcement at shipping hubs.

Another would be developing better ways to detect poaching activity and get that information somewhere useful in real time. Basics of the technology already exist, but tackling the huge geographic area that needs monitoring, and designing the kind of low-energy network that would be needed where there is limited availability of power, is a challenge.

As populations of elephants decline, we need to be able to predict where they are going to be and where they are going to concentrate. These are the places that poachers will look for them and where protection needs to be increased. Again, acoustics could be one way to approach this, but advances need to be made in how fast data can be processed to provide estimates of change to managers on the ground.

Several high-level initiatives to tackle poaching have launched this year, including the agreement at the CITES meeting in March and the Clinton Global Initiative anti-poaching project. Are there any you think are particularly good or will make a real difference?

I think that each of these initiatives is a positive step. The problem as I see it is that too little money actually ends up on the ground in Africa where it can make a difference. It is pathetic how much is spent to have VIPs travel across the world to meet and talk and promise all sorts of things, to set up more groups to advise, who then spend money at high-profile venues where they talk some more — often without any of the people who know the situation on the ground being involved.

Ask the guys patrolling areas that are much too large for the size of their force whether they are aware that more money has been flowing in to protect elephants. They will look at you like you are crazy.

What really needs to be done to stop poaching?

Of course the market for ivory is the real core of the problem. The little person in Africa is so poor by any standard you want to compare it to that. If there is a market out there, someone will be willing to do the killing, for a tiny fraction of the real value.

In Asia — mostly China — a change is needed in the way ivory is viewed in the culture. In the meantime, really properly funding the operations of the guys putting their lives at risk patrolling areas would help. Increase the training and numbers of anti-poaching teams and make sure the supplies they need are a priority instead of the last thing that gets a scrap of attention.