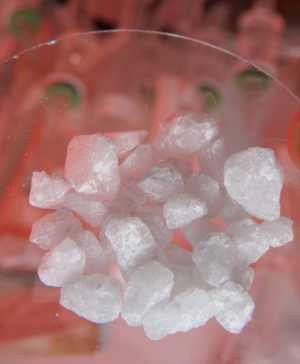 A new type of catalyst, here in crystal form, efficiently turns methanol into hydrogen, which can then power a fuel cell.

A process for extracting hydrogen from a liquid fuel could remove one of the biggest hurdles to a 'hydrogen economy', its discoverers say. They have developed a catalyst that harvests the gas from methanol, a liquid fuel that — unlike hydrogen itself — can be easily transported and stored.

Matthias Beller, a chemical engineer at the University of Rostock in Germany, and his colleagues hope that methanol might one day be sluiced through pipelines and poured into tankers, before chemical reactions convert the liquid back to hydrogen where it is needed — for example to provide power to off-grid villages, or run cars or mobile devices.

Hydrogen has a high energy density and is completely clean, burning to leave behind only water vapour as waste. It cannot be mined in large amounts, but proponents of a hydrogen economy say that it could be produced in vast quantities from water using excess electricity from wind turbines and solar plants. Unfortunately, because hydrogen is a gas it is difficult to store and transport safely unless compressed or liquefied, which is cumbersome and takes a lot of energy. Many chemists have spent decades studying how best to trap hydrogen for use as a fuel.

Locking the gas up in the form of solid or liquid chemicals is one answer. Many materials proposed for hydrogen storage, however, either don’t trap much, or hold onto the hydrogen so tightly that it takes an unfeasible amount of energy to retrieve.

That was the problem with methanol. It is straightforward to turn hydrogen into the liquid fuel: a well-known reaction combines hydrogen and carbon monoxide gases using commercial catalysts. Methanol also traps a lot of hydrogen (12.5% by weight). Yet to release the gas, chemists have previously had to heat liquid methanol to 200 °C at 25–50 times atmospheric pressure.

But Beller and his colleagues report today in Nature1 that they have discovered a soluble ruthenium-based catalyst that can efficiently turn methanol into hydrogen at a mere 65–95 °C, and at ambient pressure.

"It is difficult to estimate how much energy will be saved," says Beller. The process is still at an early stage, years away from commercialization. But he thinks that it could be enough to make methanol a viable energy carrier, potentially delivering hydrogen for fuel cells in mobile phones, computers or even cars.

Edman Tsang, a chemist at the University of Oxford, UK, who also works on storing hydrogen in liquids including methanol2, says that the work is a "major discovery". In particular, he says, the low temperature of the reaction is attractive because it is about the same temperature as the waste heat from an operating hydrogen fuel cell. That means that it may be possible to combine a methanol–hydrogen reaction with a fuel cell that guzzles up the gas to produce electricity.

There are technical hurdles to overcome, however — not least of which is scaling up the reaction. To produce enough power to run a car, for example, the reaction would have to yield some 24 litres of hydrogen a second; in the lab, Beller has demonstrated only millilitres of flow per minute. The catalyst would also need to be stable for months or years, whereas Beller has so far shown only that it is stable for at least three weeks.

Furthermore, the reaction uses both the catalyst and a strong alkali to rip apart methanol and water, turning them into three parts hydrogen and one part carbon dioxide. That carbon dioxide would have to be trapped to prevent it either escaping into the atmosphere or reacting with the alkali and slowing down the methanol–hydrogen conversion. If it can be trapped, however, it might be possible to recycle the carbon dioxide by using it to convert more hydrogen to methanol, keeping carbon emissions from the process low.

Despite the drawbacks, says Tsang, the conversion from methanol to hydrogen is worth pursuing: hydrogen fuel cells are twice as efficient as fuel cells that directly run on methanol, for instance.

Not everyone agrees with Beller and Tsang. George Olah, a Nobel prizewinning chemist at the University of Southern California in Los Angeles, thinks the science is solid, but says that there is no need for it. Olah argues that a future economy could use methanol directly as a liquid fuel, so the world should work on ways to produce it — perhaps by capturing carbon dioxide.

Peter Hall, who studies energy storage at the University of Sheffield, UK, says that people who hope to use methanol, or methanol–hydrogen systems, in cars or mobile phones are “seriously underestimating the engineering complexity of first developing a practical system and then miniaturizing it”. Instead, he says, batteries will be key to energy transport and to small-scale storage of electricity from solar panels. Long-term, large-scale storage of wind energy could best be achieved by simply storing compressed hydrogen underground.

Where methanol–hydrogen systems might have a role, says Hall, is in communities that are isolated from the electricity grid but rely on harvesting renewable energy and storing it as hydrogen, and want to move the gas around. “Methanol would be ideal for this application, since it could be easily transported by road,” he says.