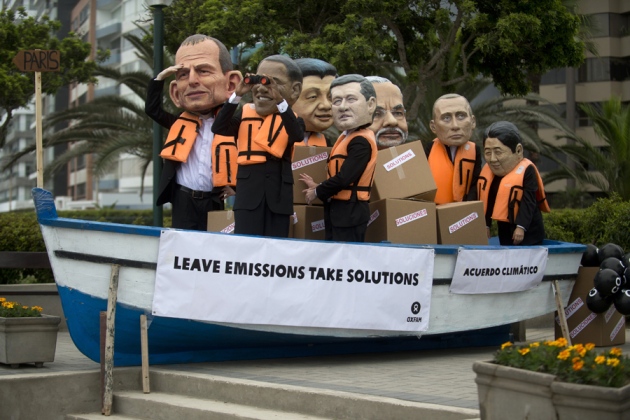 Two weeks of climate negotiations in Lima have wrapped up with a road map for the establishment of an international climate treaty in Paris next year. But the agreement has left crucial issues, including the structure of the eventual treaty, financial aid to help poor countries reduce greenhouse-gas emissions, and how to distribute the burden between developed and developing countries, to be settled next year.

“As a text, it’s not perfect, but it includes the positions of the parties,” says Peruvian environment minister Manuel Pulgar-Vidal.

The agreement, reached early on Sunday morning, advances preliminary material for the treaty and lays out basic rules for countries to develop and submit pledges to reduce greenhouse-gas emissions. These reduction plans are expected in the first half of next year.

Faced with opposition from China and other countries that wanted a less-stringent assessment process for developing nations, negotiators abandoned language that would have established formal reviews for climate pledges. They also dropped a proposed requirement that countries include additional technical data that would have made it easier to evaluate those pledges.

Environmentalists and some scientists criticized the decision, arguing that it will be hard to judge the adequacy of the pledges and too push governments to do more. Discussions over how to assess climate pledges will remain on the table in Paris, where negotiators hope to create a treaty that enters into force after 2020 and that can then be updated regularly with new emissions commitments.

“In the next round, I expect things will become a little more formal,” says Jake Schmidt, director of the international programme at the Natural Resources Defense Council in Washington DC.

The importance of independent assessments became clear earlier in the week when a scientific review suggested that Australia is unlikely to meet the pledge it made at the 2009 climate summit in Copenhagen. The country committed to cut emissions to 5% below 2000 levels by 2020, but is instead on track for a 26% increase, according to an analysis by Climate Action Tracker, a consortium of scientific organizations based in Berlin.

“It’s a major scientific task to be able to monitor this process,” says Bill Hare, director of Climate Analytics, a member of the Climate Action Tracker consortium. Developing countries will need to bolster the science underlying their greenhouse-gas estimates, Hare says, and the consideration of forestry, agriculture and broader land-use trends will only make the task more complex.

Climate Action Tracker’s latest warming projection, conducted in light of recent pledges by the United States, China and Europe, suggests that the global average temperature could rise around 3 °C above pre-industrial levels on the basis of current commitments, well above the 2 °C target that countries have adopted as a threshold to avoid the worst impacts of global warming.

Scientists are engaging in a technical review of the long-term temperature target, driven in part by some developing countries’ demands that it be revised from 2 °C to 1.5 °C. That assessment will look at the risks posed by different levels of warming, as well as the consequences of overshooting the 2 °C threshold.

“We’re exploring the risks, but it’s not easy to say what people are willing to accept and what we are not,” says Andreas Fischlin, an ecologist at the Swiss Federal Institute of Technology in Zurich and co-facilitator of the review. That report is scheduled for release later in the spring. “The question is how much that will reverberate throughout the rest of the process,” he says.

Alden Meyer, director of strategy and policy for the Union of Concerned Scientists in Washington DC, says the Lima agreement is enough to keep the talks moving forward, but underscores the challenge going into Paris.

“This decision was not that big of a deal,” he says. “If this is any indication, it’s going to be a very hard-fought negotiation over the coming year.”