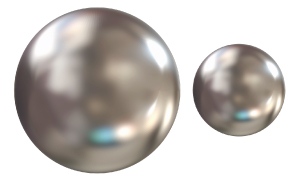 When two positively charged spheres get close enough, they will begin to attract rather than repel eath other.

Make two metal spheres positively electrically charged, bring them close together, and what happens? They’ll repel one another, because like charges repel – right?

Wrong. According to physicist John Lekner at the Victoria University of Wellington in New Zealand, they will most probably attract one another, violating the intuitions of basic physics. The counterintuitive result was published today in the Proceedings of the Royal Society A1.

Even experts are surprised. “The phenomenon was not known to me, but after reading the paper, it makes sense,” says chemical engineer William Ducker at Virginia Tech in Blacksburg, a specialist in measuring the forces between microscopic particles.

Another expert in that field, David Grier of New York University in New York city, admits that at first it seemed “a wild result” that left him and his colleagues scratching their heads until they thought about it carefully.

The key to Lekner’s seemingly bizarre conclusion is that the spheres are electrically conducting. This means that charge can get redistributed non-uniformly on their surfaces.

In particular, a region of positive charge on one sphere could cause the positive charge on the other to retreat, piling up further away and leaving a patch of negative charge behind (called an image charge) — which would then interact attractively. The question is, how do such changes affect the total electrostatic energy of the two spheres — and how does that energy itself change as the spheres come closer?

It’s not obvious; the only way to find out is to crunch through the maths. Lekner has now done so, and finds that a net attraction almost always wins out as the spheres get closer. When far enough apart, the two spheres do act like more-or-less uniformly charged objects, which repel one another when the charges are alike. But as they get closer, they become polarized: one sphere elicits an image charge in the other by pushing like charge away. At close enough range, the resulting attraction wins out.

But not always — there’s one exception. If both spheres have the same charge and size, it’s not clear which will polarize the other, and Lekner calculates that in practice neither wins: the spheres continue to repel each other. More generally, there is repulsion between spheres of any size if they have precisely the same charge as they would acquire if they were in contact: equal-sized, equal-charge spheres are a special case of this.

It’s not so odd once you think about it, Ducker and Grier agree. In fact, says Ducker, there’s an analogy with the way two like-charged surfaces or particles can attract each other at short range in a salt solution, because they draw a cloud of oppositely charged ions towards themselves, called the electrostatic double layer.

Wouldn’t you expect a striking effect like this to have been seen already? Maybe it has been, says Lekner: “The problem is old — ancient, as physics goes — and I may have missed something.” But he does point to measurements of the electrical forces between two charged disks by the English scientist William Snow Harris in 1836, who invented lightning conductors for ships. Snow Harris reported that in some cases “repulsion vanished altogether, and was superseded by attraction”.

Lekner thinks that with modern techniques, it should be relatively straightforward to test his theory experimentally. But there are several hurdles. Grier points out that the attraction will be weakened in an ordinary metal where the electrical resistance would hinder the redistribution of electrical charge, though it might work better in superconductors.

Ducker thinks it could be easier at small scales, because the spheres would have to be smooth enough to feel the attraction before they touched. Also, one would have to be able to control the charge on each sphere, and to suppress uncontrolled charge transfer between them. All the same, Ducker may have a go. “I’m already thinking about the experimental details,” he says.