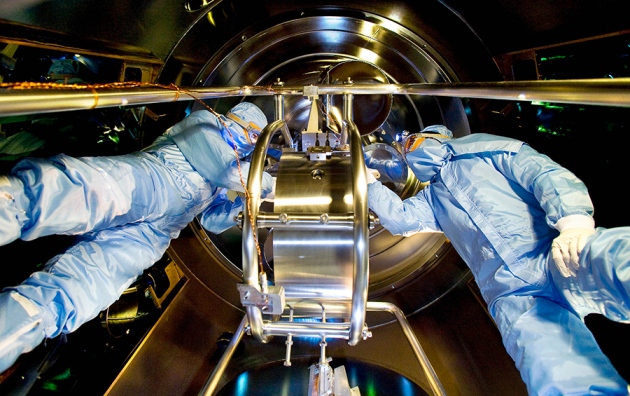 Mirrors are prepared for use in Virgo’s interferometers.

The car journey along the gravitational-wave detector’s right arm lasts a good 10 minutes, an eternity compared with the 10 microseconds it takes for the laser light needed to detect these ripples in space-time to make the same trip.

This tunnel isn’t in Hanford, Washington, or Livingston, Louisiana, the locations of the twin labs that form the Laser Interfero­meter Gravitational-Wave Observatory (LIGO), which made history a year ago when its team announced the first direct detection of gravitational waves.

This is LIGO’s lesser-known cousin Virgo, a gravitational-wave lab that uses similar equipment and lies in the bucolic Tuscan flatlands near Pisa in Italy.

Virgo began hunting gravitational waves in 2007. LIGO came online in 2002 and made its first discovery — of waves produced by the merger of two black holes — in September 2015, leading to the announcement on 11 February 2016. Virgo was being upgraded and missed the event, a source of quiet disappointment. “Let’s be honest, it will be the Americans who will get the Nobel,” says Luciano Maiani, a particle physicist at the Sapienza University of Rome. Maiani headed Italian funding agency the INFN in the 1990s, when it gave Virgo the go-ahead along with the CNRS, France’s basic-research agency.

Now, the 5-year, €23-million (US$24 million) ‘Advanced Virgo’ overhaul is almost finished: the upgraded lab will be inaugurated on 20 February, although it will be several more weeks before it starts doing science. Together, the twin LIGO machines and Virgo will make more-detailed and more-confident detections than LIGO alone. “We’re happy to have an instrument that’s starting to come back to life,” says physicist Bas Swinkels, who is co­ordinating the Virgo tune-up.

LIGO’s September find, combined with one it made on 25 December 2015, suggest that gravitational-wave detections will occur regularly. This validates the whole enterprise and opens up the field of gravitational-wave astronomy that Virgo helped to pioneer.

“After the announcement, we felt vindicated,” says Giovanni Losurdo, who has worked at Virgo since the early 1990s and led the overhaul project. “All the work we did for nearly 30 years in near-obscurity suddenly gained a meaning.” The LIGO and Virgo teams have an agreement to pool their data; the LIGO discovery papers included Virgo researchers.

Named after the Virgo cluster of galaxies whose stellar explosions it aims to detect, Virgo was built by a Franco-Italian collaboration. The Netherlands, Hungary and Poland later joined up.

The Virgo interferometer runs laser light back and forth inside two metal vacuum tubes each 3 kilometres long, which are housed inside elevated tunnels. Like LIGO, this set-up detects a space-time ripple by constantly comparing the lengths of its two arms for discrepancies of less than one part in 1021. But the interfero­meters are shorter than LIGO’s 4-kilometre-long instruments, making Virgo less sensitive.

“All the work we did for nearly 30 years in near-obscurity suddenly gained a meaning.”

And during the latest rebuild, a significant snafu occurred that will temporarily reduce its sensitivity further. To increase stability and reduce noise, Losurdo’s team had replaced the four silica mirrors that keep the laser bouncing inside the two arms with new mirrors that weigh twice as much as their predecessors, and hung them from hair-thin, fused-silica fibres. But the fibres soon disintegrated, and the team switched back to the steel wires used in the previous decade, which are less effective at keeping out unwanted vibrations. A task force concluded that stray microscopic particles were to blame and that an upgrade to the systems keeping the mirrors under high vacuum should fix the problem, says Swinkels. But for now, the lab plans to forge ahead with the steel wires and replace them later with the silica fibres.

In its first run, Virgo should reach more than one-quarter the current sensitivity of LIGO, Swinkels says. Once the silica fibres are installed and other improvements are made, that could rise to one-half, meaning Virgo could scan a cosmic region eight times larger than with steel wires.

Even though Virgo has less reach than LIGO, having a third machine will help in several ways. Interferometers are not equally sensitive in all directions, and have blind spots. If the waves come from a direction for which LIGO is relatively ineffective, Virgo could add key information about the event that created them, says Virgo spokesman Fulvio Ricci, a physicist at the Sapienza University of Rome.

With a third machine, LIGO can also detect more events, adds theoretical physicist B. S. Sathyaprakash, a senior LIGO researcher at Pennsylvania State University in University Park. Gravitational-wave signals are picked out from background noise, and a small blip in only one interferometer is almost certainly just that; simultaneous blips in two interferometers may still be a fluke.But blips in three machines at once significantly raise the odds that an actual ripple went by. Because signals from more-distant sources are fainter, Sathyaprakash estimates that Virgo might extend LIGO’s reach by up to 12%, which would mean monitoring 40% more of the volume of the Universe.

Perhaps the biggest advantage of a third interferometer is that it helps to narrow down the possible origin of the waves. For the event that underpinned LIGO’s discovery, the collaboration could say only that it came from a slice of sky centred near the celestial south pole. By triangulating the precise timing of future signals from all three interferometers, researchers will be able to narrow the region down by at least a factor of five. This is important for astronomers who plan to look for visible light or other radiation coming from the same gravitational-wave source. Receiving both types of signal from the same event could help to elucidate phenomena such as supernova explosions. And searching a narrower region could reduce a week’s worth of observation to one night, Sathyaprakash says.

That precision should improve further when the Kamioka Gravitational Wave Detector, or KAGRA, near Hida City in Japan, joins the gravitational-wave family in 2018. KAGRA’s arms are 3 kilometres long, like Virgo’s, but two key features aimed at reducing noise will diffentiate it from LIGO and Virgo: it is the first major interferometer to be built underground, and its mirrors will be kept some 20 degrees above absolute zero, not at room temperature.

Several years later, another family member should light up: LIGO-India, a replica of the twin LIGO machines. The Indian government has selected a site in Maharashtra state, but construction has yet to begin, says LIGO-India spokesman Tarun Souradeep, a cosmologist at the Inter-University Centre for Astronomy and Astrophysics in Pune.

For now, all eyes are on Virgo. “We feel the pressure from LIGO, from the funding agencies and from the whole world to get this online,” Swinkels says.