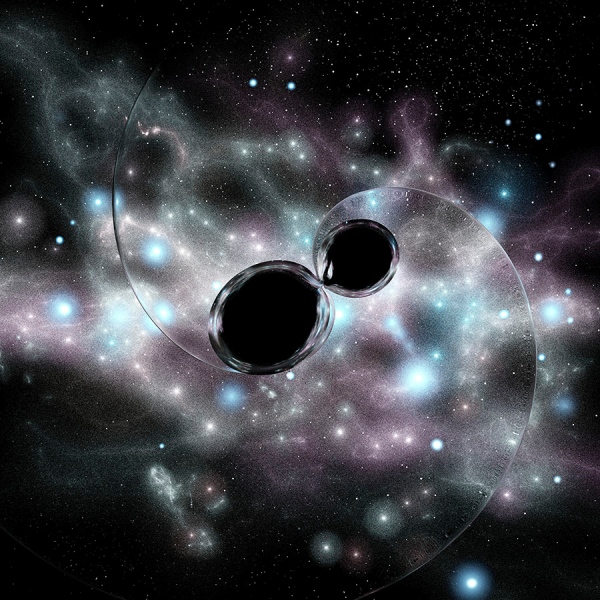 An artist's illustration of the merger of two black holes (centre) causing gravitational waves to spiral out from the collision.

Just before 4 a.m. on 26 December, B. S. Sathyaprakash woke up to some good news: gravitational waves had been detected for only the second time in history.

The theoretical physicist from Cardiff University, UK, had his laptop next to his bed, set up to ring in response to automated e-mail alerts from computers at the Advanced Laser Interferometer Gravitational-wave Observatory (LIGO).

“I got up and I went and checked the computer. Lo and behold, there was an event from just two minutes before,” he says. At 3:38:53 UTC (Coordinated Universal Time), LIGO’s twin detectors in Louisiana and Washington state had both picked up the signature ripples of two massive objects — probably two black holes — in the final stages of spiralling into each other.

At the time, the international LIGO collaboration and its colleagues at Virgo, a European observatory near Pisa, Italy, were busy analyzing LIGO's first discovery: the event they had detected on 14 September. The scientists would announce that finding in February, to great global fanfare. They did not run a full analysis of the second event until weeks later, says LIGO physicist Bruce Allen, managing director of the Max Planck Institute for Gravitational Physics in Hanover, Germany.

“It was absolutely mind-boggling how within a few months of the first event we had a second one,” Sathyaprakash says.

The second detection “shows that this whole business is not a fluke”, says Clifford Will, a theoretical physicist at the University of Florida in Gainesville who is not a member of either the LIGO or Virgo teams. In principle, the September discovery could have been a huge stroke of luck, but this second event suggests that there is a large population of black-hole pairs out there that will produce frequent mergers. LIGO and Virgo can look forward to regular detections, says Will, who studies gravitational waves and other predictions of Albert Einstein's general theory of relativity. “This is going to be a new kind of astronomy.”

Einstein predicted that any accelerating or rotating bodies should produce ripples in the fabric of space, which are vaguely similar to sound waves but move at the speed of light and can propagate in a vacuum.

The detailed analysis of this second detection confirmed that the signature had to be the ripples from a pair of black holes (see video below). This time, the signal from the gravitational waves lasted one full second, instead of one-fifth of a second as in the first event. The second event encompassed the objects’ last 27 orbits around each other, versus just five or so from the first detection. This enabled the researchers to get a test of general relativity that was in some respects twice as precise as their test during the first detection.

This was true even though the September event was 'louder' than the December event. The first pair of black holes weighed as much as 36 and 29 times the mass of the Sun, whereas the holes in the second pair were relatively lightweight, at 14 and 8 solar masses, and radiated one-third as much gravitational energy. (In both cases, the black-hole pairs might have been in mutual orbits for millions or billions of years, but LIGO only captured the finale, where the orbits and the gravitational waves they produced had frequencies within the observatory's window of sensitivity.)

The LIGO and Virgo scientists estimate that both collisions occurred more than 400 megaparsecs (1.3 billion light years) away, although the distances could not be measured precisely. The teams presented their latest results on 15 June at a meeting of the American Astronomical Society in San Diego, California, and published them in Physical Review Letters1.

The latest discovery was especially exciting for physicist Chad Hanna, a LIGO collaborator at Pennsylvania State University in University Park. When Hanna got the alert via text message, it was still Christmas Day in the US, and he was visiting with family. The collaboration requires members to keep data completely confidential, so Hanna hopped out of his chair, got his laptop and went upstairs to an empty room. At first, he was sceptical, he says: “I just didn't think the Universe had such a sense of humour to send a real event on Christmas.”

But he soon realized that although the signal was relatively quiet, it was genuine. It was a crucial test for the software that combs the data from the two observatories in real time, which he helped to design. The system could catch events even if they were half-buried in the noise, but didn't produce too many false positives.

Eventually, the automated alerts will also immediately notify dozens of teams of astronomers. The researchers would then reposition their telescopes in the hopes of detecting visible light, or other electromagnetic waves, that originate from the same events that produce the gravitational waves.

After its first four-month science run between September 2015 and January 2016, the US$620-million Advanced LIGO — an upgraded version of an earlier observatory — shut down for an upgrade, and is scheduled to start another run this September, accompanied by an upgraded Virgo.

The results released today complete the search for black-hole mergers in LIGO’s autumn run, but the collaboration is still sifting its data for other types of event — and may yet announce further discoveries before the next run even begins. In particular, the Einstein@home project is looking for signals with the help of computers belonging to volunteers around the world.

A computer simulation recreated the event detected on 26 December 2015, in which a black hole of 14 solar masses merged with one of 8 solar masses.