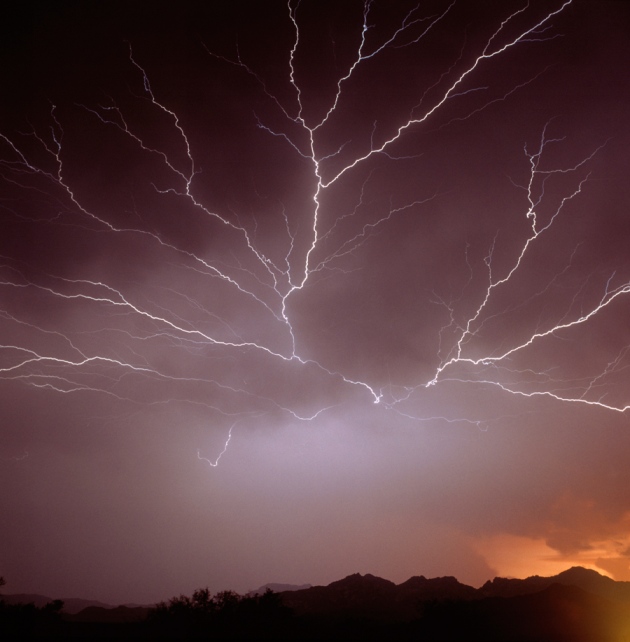 Cloud-to-cloud lightning can be detected with sensors, and used as a proxy for intense storms.

Meteorologists watched as afternoon thunderstorms brewed in the mountainous region of central Guinea. By the evening of 22 October, the storms had intensified and were moving west towards the coast of Africa. At 8.20 p.m., the meteorologists received a thunderstorm alert, and for the next 45 minutes the 130,000 residents of the city of Fria were hammered by heavy rain, flash floods and winds of up to 77 kilometres per hour.

What happened that evening was not un­usual. Similar storms blow through Fria and Guinea’s coastal capital Conakry regularly during the rainy season. Flash flooding is a common problem, and the country is frequently buffeted by tornadoes.

What was unusual was the way the storm was detected. Government meteorologists in Guinea lack the Doppler radar system that is usually used for this, and have struggled to track weather using rudimentary equipment. Europe and the United States provide free satellite data and forecasts, but these are coarse and infrequent. Only in recent months has Guinea turned to a new, simple proxy for storms: flashes of lightning.

The project shows how lightning detection could provide a quick and relatively cheap way for poor countries to acquire basic weather services. Earth Networks, based in Germantown, Maryland, spent around US$1 million to deploy the current network. By comparison, Bah says, even a simple Doppler radar system would cost around $10 million. And beyond that initial outlay, a lack of expertise in countries such as Guinea makes those systems prohibitively difficult to maintain and operate.

Earth Networks is currently giving Guinea its lightning data for free, but eventually hopes to sell its services there. Already, the company has contracts worth more than $5 million with US government bodies, including the National Oceanic and Atmospheric Administration (NOAA) and the Air Force, to provide lightning data from nearly 700 sensors across North America and the Caribbean. It also has smaller customers, such as golf courses and airports. “Our system will work in any part of the world and instantaneously produce results,” says Robert Marshall, Earth Networks’ president and chief executive. “That’s the real breakthrough here.”

The technology has its roots in research carried out at the Massachusetts Institute of Technology in Cambridge, and depends on a 26-centimetre-long antenna that registers high-frequency electromagnetic signals from lightning discharges. Earth Networks acquired the technology in 2006, and developed the software necessary to triangulate among multiple sensors to pinpoint individual flashes.

The company has competitors, including Vaisala, based in Vantaa, Finland. But Earth Networks was the first, in 2009, to deploy a system for tracking not just the major lightning bolts that strike the ground but also the more common cloud-to-cloud lightning strikes that are generated as storms intensify. Earth Networks uses the data to assess storm activity and estimate rainfall, and produces severe-storm alerts 9–16 minutes faster than those generated by NOAA’s National Weather Service using Doppler radar.

But the technology’s biggest impact could be in countries with limited access to weather services based on satellites and radar. Earth Networks has more than 50 antennas covering most of Brazil and 50 more covering all of India. The company says that it has contracts worth a total of several million dollars in the two countries. The project in Guinea is intended to showcase the technology in a country that has little scientific capacity and hardly any meteorological infrastructure at all.

John Snow, an atmospheric scientist at the University of Oklahoma in Norman and author of a forthcoming World Bank report on weather services in developing countries, says that the Guinea project is an attractive model. The phone towers, which also have basic weather sensors, do not provide ideal conditions for weather stations, Snow says, but the telecommunications company with which Earth Networks has partnered can provide security, technicians and communications. Although custom-built weather stations might provide more-precise data, using phone towers is cheaper and more reliable, he says. “It is a working solution that certainly moves us in the right direction.”

Bah says that his agency must now find ways to disseminate the alerts, perhaps by phone. It currently broadcasts radio forecasts just two or three times a day. It must also find money to eventually pay Earth Networks and to formally incorporate lightning data into its operations. But in just a few months, Guinea has moved from rough forecasts to real-time storm tracking. “What I can say from our evaluation is that this system can be deployed in countries like Guinea,” says Bah.