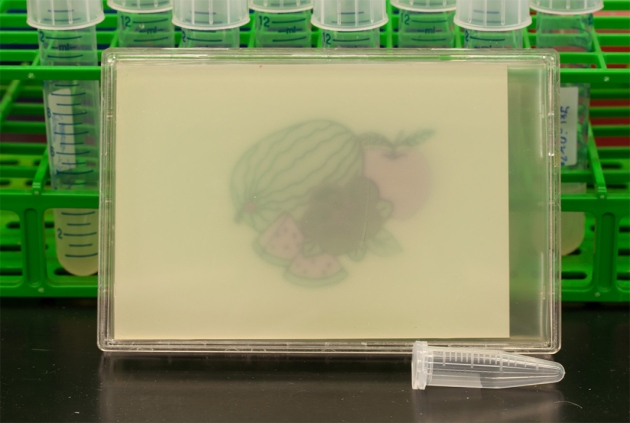 This colour 'photo' was made by Escherichia coli bacteria engineered to express pigments in response to red, green or blue light.

To show off the powers of synthetic biology, researchers have engineered a primitive kind of colour vision into bacteria — and got the microbes to paint pictures of what they see.

The genetically modified Escherichia coli can sense red, green and blue (RGB) light, and they respond by producing a pigment of the corresponding colour. Projecting light on to a Petri dish of the bacteria leads them to create colour ‘photographs’, albeit ones with an exposure time of 18 hours.

The RGB-sensitive E. coli make up a toy system that is a stepping stone to more complex biological programming, says Christopher Voigt, who led the study at the Massachusetts Institute of Technology in Cambridge and has pictures from the experiment hanging on his office wall. The work is published in Nature Chemical Biology1.

In 2005, a team led by Voigt engineered E. coli to respond to light and produce a black pigment, creating black-and-white images2. That study required the insertion of four genes into the bacteria, including one that codes for a light-sensitive protein taken from a cyanobacterium and one for a protein that blackens a particular chemical.

The RGB system uses 18 genes, including three that encode light-sensitive proteins. It “goes way beyond the original black and white system in terms of complexity”, says Pamela Silver, a systems biologist at Harvard Medical School in Boston, Massachusetts.

The wider aim, says Voigt, is to find ways to turn many types of gene on and off in bacteria using flashes of light of different colours. Researchers could then, for example, make the bacteria produce complex molecules on demand by using light to stop and start reactions.

It may be easier and cheaper, at large scales, to stimulate microbes with light rather than bathing them in particular chemicals, says Voigt. He already has a catchy name for his light-sensitive systems: disco bacteria.