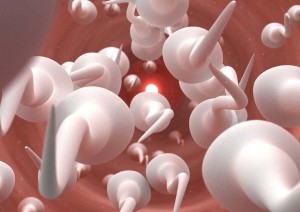 Sperm movements are notoriously hard to catch on camera.

Human sperm have been caught twirling in an elaborate dance. A new three-dimensional imaging technique1 has revealed spiralling movements that had previously only been inferred from two-dimensional data2.

The study, published today in the Proceedings of the National Academy of Sciences, describes the first large-scale, high-resolution recordings of human sperm in three dimensions, tracking more than 1,500 cells over several hours. Human sperm have eluded such detailed observation in the past. Their heads are just 3–4 micrometres long and can only be seen under high magnification, but the cells zoom around at up to 100 micrometres per second, ducking in and out of focus or darting out of range in an instant.

“Our intention was to create something not bounded by conventional optics,” says Aydogan Ozcan, a bioengineer at the University of California, Los Angeles, who led the study. “This is the first observation of something that was entirely hidden.”

The research team watched the wily sperm not with a conventional microscope lens, but with a light-sensing chip — measuring about 4 by 6 millimetres — placed underneath the translucent samples. A red light-emitting diode (LED) shines down on the sperm, forming a hazy shadow on the chip that follows the head of each cell as it moves horizontally. A second, blue LED illuminates the sperm from a different angle, casting shadows that change with each sperm head’s vertical position. Imaging cells en masse at about 90 frames per second allowed the researchers to characterize sperm movement more precisely than ever before.

More than 90% of the sperm moved along slightly curved paths, wiggling their heads slightly from side to side. A small fraction — 4–5% — travelled in near-perfect spirals, forming helices between 0.5 and 3 micrometres in radius (see video, below). Most of the helices were right-handed, but Ozcan says that it is too early to know whether this preference serves any physiological function.

Susan Suarez, a sperm researcher at Cornell University in Ithaca, New York, is curious about the significance of the swimming patterns. She hopes that the method can be used to study sperm swimming under a wider range of physiological conditions, including the pH and fluid conditions encountered by the sperm en route to an egg.

Chip-based imaging could one day lead to cheaper and more portable ways for fertility researchers to look at sperm movement, replacing costly computer systems that analyse microscope images. But Ozcan says that his technique — which can be used only on translucent materials — could also be used to study bacteria and other swimming microorganisms.

David Brady, head of the Duke Imaging and Spectroscopy Program at Duke University in Durham, North Carolina, says that the sperm imaging is “a great demonstration of an application” in the growing field of lens-free imaging. Smaller and more powerful technologies have emerged in the past 5–10 years, he says, that have yet to cross over into mainstream experimental biology. The authors have come up with an application that will “get people talking”.

Some sperm biologists think that the technique could also open up research avenues. “I’ve been trying to find a way to look at sperm — moving sperm — and this seems like it would be a good method,” says David Clapham of Boston Children's Hospital in Massachusetts. “The beauty of this is that it’s done so quickly and on so many cells at once.” However, Clapham says, the method tracks only sperm heads, so can't capture the complex tail movements that are crucial to understanding sperm function — and dysfunction.

The skinny tails, which can measure less than half a micrometre across, would require improvements to the imaging technology, says Ozcan. But, he says, “it’s definitely possible”.