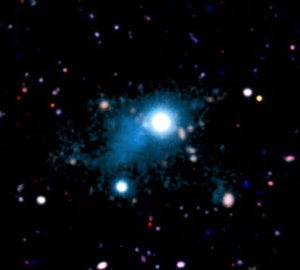 The quasar UM 287 (bright spot at the centre) shines light on the largest gas cloud ever seen in the Universe.

Astronomers have discovered the largest known gas cloud in the Universe. The mammoth nebula may be the first imaged filament of a spidery arrangement of galaxies, gas and dark matter that traces the large-scale structure of the cosmos. The team used a brilliant quasar, seen as it appeared when the Universe was less than 3 billion years old, to illuminate the faint gas in the beacon’s neighbourhood.

The flood of light from the quasar (one of a class of intensely bright galaxy cores, thought to be black holes going through a spurt of growth) prompts hydrogen atoms in the gas to emit a characteristic wavelength of ultraviolet radiation. As the Universe expands, the radiation subsequently stretches into longer wavelengths, becoming visible light. Astronomers Sebastiano Cantalupo and Xavier Prochaska of the University of California, Santa Cruz, and their colleagues recorded that light using the Keck Observatory atop Hawaii’s Mauna Kea volcano. The Keck images reveal a gas cloud that is 460,000 parsecs (1.5 million light years) in length — or more than ten times the diameter of our own Milky Way galaxy. It is the first detection of radiation from a cloud “on scales far beyond a galaxy”, Prochaska says. The researchers describe the discovery online today in Nature1.

The paper “reports a spectacular observation — the largest diffuse gas cloud ever found”, comments astronomer Joop Schaye of Leiden University in the Netherlands, who was not part of the study. 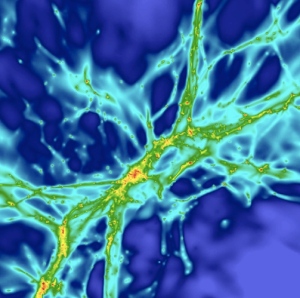 This 10 million light year-wide section of a simulation of the early Universe shows how matter coalesces into galaxies connected by filaments of rarefied gas.

Before galaxies formed, the Universe contained a primordial, diffuse gas of matter, consisting of both ordinary atoms and dark matter. According to the leading model of galaxy formation, gravity first concentrated dark matter into halos, and these provided 'gravitational wells' in which galaxies then coalesced. Simulations have repeatedly shown that not all matter would fall into these wells, however, and that instead, some thin bridges would be left over, linking galaxies into a cosmic web (see picture at left).

Researchers have previously found evidence of a filament of the cosmic web that is made of dark matter, inferring the mass and shape of this invisible tendril by the way it gravitationally bends and brightens light from more-distant galaxies that lie behind it as seen from Earth2.

The cloud extends much farther than a halo of dark matter could, suggesting that it must stretch between galaxies. This is best explained if the cloud itself were a visible filament of the cosmic web, Prochaska says.

Other scenarios that might account for the mammoth cloud — such as gas that has been stretched and torn by a galaxy's gravitational pull — don’t work because “the scale and mass of the cloud is far too large” for such an explanation, Prochaska adds.

Although the gas cloud could be the first visible filament of the web that astronomers have detected, Schaye says that the identification remains uncertain. “The authors do make a convincing case that the emitting gas extends beyond the dark halo hosting the bright quasar, but that does not [necessarily] make it a large-scale filament,” he cautions.

Even if it is just a mammoth gas cloud, the discovery is significant, Schaye notes, because it seems that only some galaxies and quasars are surrounded by such clouds. And if the cloud is a filament, its brightness indicates that it contains more than ten times as much cold gas than current simulations of the cosmic web permit.

One explanation for this mismatch in mass, the team notes, is that gas in the cosmic web clumps together more than predicted, on scales of a few thousand parsecs — a length smaller than simulations can clearly resolve. The clumpiness is important to determine, because it may affect the rate at which cold gas, which fuels star formation, falls into galaxies, Prochaska notes.

Two new instruments will soon join the search for more giant gas clouds. At the Very Large Telescope in Paranal, Chile, the Multi Unit Spectroscopic Explorer instrument is expected to begin operation in October, and will hunt for clouds surrounding quasars that are more remote than the one examined by Prochaska’s team. At the Keck Observatory, the Cosmic Web Imager, scheduled for installation next year, will examine clouds in finer detail around quasars that lie closer to Earth.