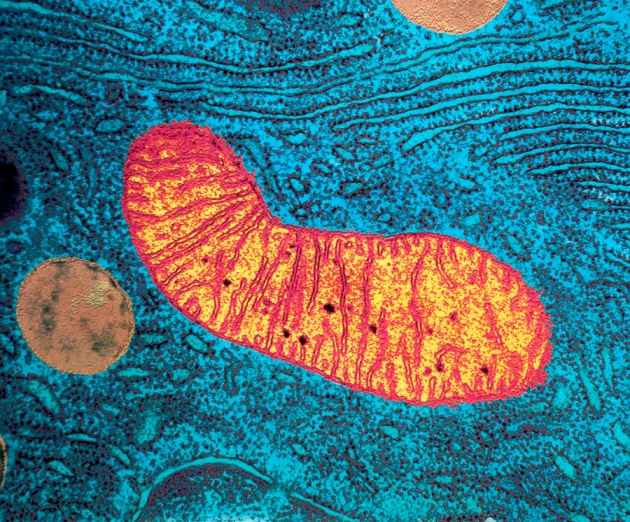 Bursts of activity in a mitochondrion produce free radicals that can damage the cell powerhouses.

Scientists have a crystal ball on their hands: bursts of activity in the energy-producing mitochondria in a worm’s cells accurately predict how long it will live.

The findings, published today in Nature1, suggest that an organism’s lifespan is, for the most part, predictable in early adulthood. Unlike other biomarkers for ageing, which work under limited conditions, these mitochondrial bursts are a stable predictor for a variety of genetic, environmental and developmental histories. “Mitochondrial flashes have an amazing power to predict the remaining lifespan in animals,” says study lead Meng-Qiu Dong, a geneticist who studies ageing in the Caenorhabditis elegans worm at the National Institute of Biological Sciences in Beijing. “There is truth in the mitochondrial theory of ageing.”

The mitochondria are organelles that power the cells of plants, animals and other eukaryotic organisms. During energy production, they produce reactive oxygen molecules, such as free radicals, that can cause stress and damage the mitochondria. Although mitochondria break down over time, the mitochondrial theory of ageing, first proposed2 in 1972, remains controversial and unproven. For instance, some long-lived organisms, such as naked mole rats, endure with high levels of oxidative damage. Nevertheless, many scientists think that mitochondria remain the primary drivers of ageing.

Dong became interested in the 2008 discovery3 that mitochondria produce reactive oxygen molecules in 10-second pulses — ‘mitoflashes’ — every couple minutes. For the first time, scientists could observe individual mitochondria and their rates of activty through the course of an animal’s life. In this study, Dong initially compared mitoflash rates in short-lived C. elegans worms, which live an average of 21 days, to long-lived worms that live an average of 30 days or more. She found that, in all of the animals, there were two moments in life when mitoflashes bunched closely together: one burst during early adulthood and another during senescence.

At first, she expected that the burst later in life would be the important one. “It was a total failure,” she says. Instead, it was the early burst that revealed a correlation between flash frequency and lifespan: worms with an average lifespan of 21 days had more frequent flashes during this burst than their longer-lived brethren. The correlation held across 29 genetic mutants with various lifespans.

Mitoflashes also proved to be a powerful record of a worm’s early life experiences. For instance, worms exposed to heat shock or starvation tend to have longer lives, and predictably, their mitoflashes occurred at longer intervals. Even genetically identical worms that had different lifespans due to chance events alone showed the same correlation between mitoflash frequency and longevity. The most striking finding came when Dong treated a long-lived worm to increase its production of reactive oxygen molecules. This shortened the worm’s life and increased the rate of mitoflashes.

“It’s a great paper,” says Jan Gruber, a biogerontologist at the Yale-National University of Singapore College. He had expected to see a gradual decline in mitoflashes over time, and was particularly surprised by the burst that comes towards the end of life, a kind of swan song. “We know that the mitochondria shut down with ageing,” he says. “Why do they shut down in a dramatic fashion?”