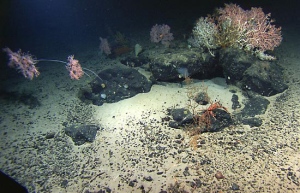 Living microbes have been found deep beneath the sea floor.

For the first time, scientists have discovered microbes living deep inside Earth’s oceanic crust — the dark volcanic rock at the bottom of the sea. This crust is several kilometres thick and covers 60% of the planet’s surface, making it the largest habitat on Earth.

The microbes inside it seem to survive largely by using hydrogen, formed when water flows through the iron-rich rock, to convert carbon dioxide into organic matter. This process, known as chemosynthesis, is distinct from photosynthesis, which uses sunlight for the same purpose.

Chemosynthesis also fuels life at other deep-sea locations such as hydrothermal vents, but those are restricted to the edges of continental plates. The oceanic crust is much bigger. If similar microbes are found throughout it, the crust “would be the first major ecosystem on Earth to run on chemical energy rather than sunlight”, says Mark Lever, an ecologist at Aarhus University in Denmark, who led the study. The results are published in Science1.

“This study is highly significant in that it confirms the existence of a deep-subsurface biosphere that is populated by anaerobic microorganisms,” says Kurt Konhauser, a geomicrobiologist at the University of Alberta in Edmonton, Canada.

The oceanic crust is formed at ridges between tectonic plates, where rising lava meets sea water and cools. The newborn rock — mostly basalt — is pushed away from the ridges and becomes buried under thick sediment. Although scientists have long known that microbes live in this sediment and in exposed basalt that has not yet been covered2, the deeper, buried parts of the crust have been a mystery. “Until our study it still wasn’t clear that there’s life down there,” says Lever.

In 2004, Lever sailed aboard the US research vessel JOIDES Resolution to collect samples from one of the best-studied regions of oceanic crust, just west of Washington state. The ship usually carries a crew of geologists, but this time, “we had five microbiologists on board”, says Lever.

The team, which included scientists from six different countries, drilled through 265 metres of sediment and 300 metres of crust to collect basalt that had been formed around 3.5 million years ago. Inside their samples, the researchers found genes from microbes that metabolize sulphur compounds and some that produce methane.

To test whether the genes came from living or long-dead microbes, the team heated the rock samples to 65 °C in water rich in chemicals found on the sea floor. Over time, methane was produced, showing that the microbes were living and growing.

Lever is convinced that the microbes are not hitchhikers from the surface, but genuine residents of the crust. “When I went on this expedition, I thought it would be impossible to get contamination-free samples,” he says. He changed his mind after cracking open the samples: the team had added small amounts of marker chemicals to the fluid they used to drill for samples, but although these chemicals slathered the exterior of the rocks, there was almost none inside. Lever now plans to analyse fragments of crust collected from other sites in the Pacific Ocean and the north Atlantic.

“Given the large volume of sub-sea-floor crust, one can’t help but wonder how the amount of living biomass there compares to that at the Earth’s surface,” says Konhauser.