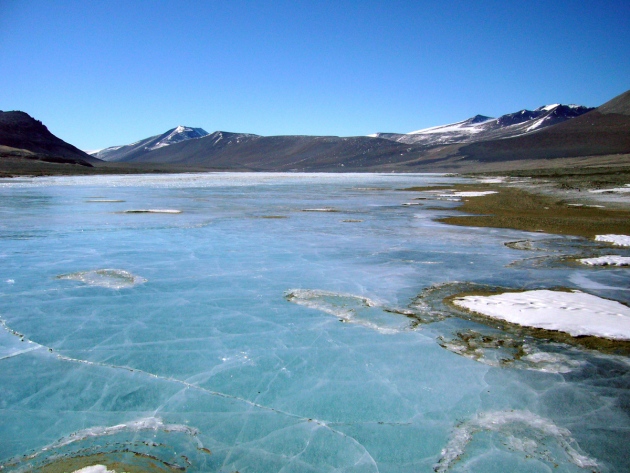 It is permanently covered by a massive cap of ice up to 27 metres thick, is six times saltier than normal sea water, and at −13 °C is one of the coldest aquatic environments on Earth — yet Lake Vida in Antarctica teems with life.

Scientists drilling into the lake have found abundant and diverse bacteria. “Lake Vida is not a nice place to make a living in,” says Peter Doran, an Earth scientist from the University of Illinois at Chicago and a member of the team that has been exploring the lake — the largest of a number of small bodies of water in the McMurdo Dry Valleys Antarctic desert. “It is quite remarkable that something wants to live in that cold, dark and salty environment at all.”

Doran and his colleagues have drilled into Lake Vida twice: once in 2005 and again in 2010. The remarkable array of microbial life that they found is described today in Proceedings of the National Academy of Sciences1.

Water samples from both trips yielded around one-tenth of the abundance of cells usually found in freshwater lakes in moderate climate zones. Some of the cells measured up to 1 micrometre in diameter — about normal for microbes — but the samples contained many more particles that were around 0.2 micrometres in diameter.

Neither cell type represents a previously unknown life form, says Alison Murray, a microbial environmentalist at the Desert Research Institute in Reno, Nevada, and a co-author of the paper. Genetic analysis suggests that most of the cells — both those of standard size and the microcells — are related to known types of bacterium. However, one abundant bacterium of normal size seems to have no close relatives among cultivated bacteria, and so may represent a new phylum.

The team has not yet worked out how the bacteria produce energy. They might emulate many known bacteria by living solely on dissolved organic carbon; or they might use more exotic forms of energy, as do some other microbes living in extreme environments. For example, bacteria in deep gold mines are known to survive on molecular hydrogen produced by chemical reactions in the rocks.

“For sure, there is a lot of energy in the brine,” says Murray. “Carbon may be the primary energy source, but hydrogen may be vital to sustain the lake’s microbial life in the long-term.”

The ice cap over the lake grows upwards as melt water from surrounding glaciers flows over the ice and refreezes. Isotope analysis of organic carbon particles in the ice suggests that the lake has been sealed for around 2,800 years, so any carbon in the brine must have been there for at least that long and there probably isn't very much of it — suggesting that the microbes may be using something else to produce energy.

Because they are isolated and there are no predators in the lake, says Murray, the cells might have switched to a biologically reduced ‘survival mode’ — without cell division and reproduction — that allows them to endure stress and harsh environments for a long time.

Lake Vida is an exceptional environment: because it is ice-sealed, it is likely to be very different in terms of geochemistry and biology from Antarctica's numerous subglacial rivers and lakes, which have been under several-kilometre-thick parent ice for millions of years. But efforts are under way to sample three subglacial lakes in various parts of the frozen continent.

Over the next two months, British, US and Russian teams plan to drill into and probe lakes Ellsworth, Whillans and Vostok. These waters may yield clues as to what conditions are needed to support life on Earth and other planets, the teams hope (see 'Hunt for life under Antarctic ice heats up').

Although Lake Vida has not been isolated for nearly as long as the subglacial lakes, the discovery of diverse microbial life below its ice is significant in its own right, says Martin Siegert, a glaciologist at the University of Bristol, UK, who is leading the British Antarctic Survey’s expedition to Lake Ellsworth.

“It is another extreme place where life is found and it provides evidence of a different set of boundary conditions in which life can exist,” he says. “Lake Vida’s extreme saltiness, too, marks a likely difference — although in truth we'll only know that for sure next month.”