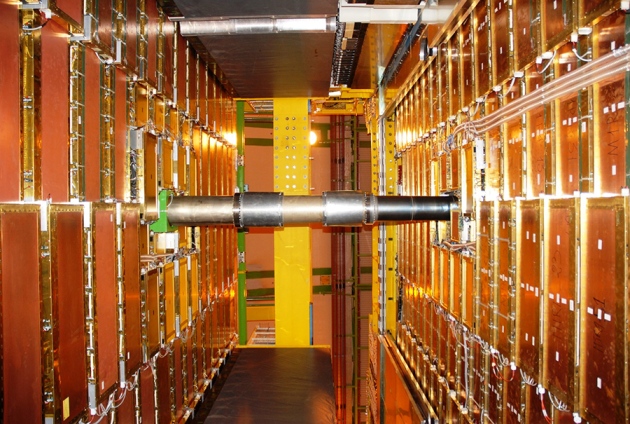 A view inside the LHCb experiment's muon detector at the Large Hadron Collider.

An intriguing signal from the Large Hadron Collider (LHC) might prove to be the crack that prises apart the standard model — physicists’ current best description of how matter and forces interact.

Analysis of data gathered during 2011–12 at the collider at CERN, Europe’s particle-physics laboratory near Geneva, Switzerland, suggests that in particular decays, short-lived particles called B-mesons create taus more frequently than they create muons. (Taus and muons are heavier cousins of electrons.) But the standard model says that once the particles’ mass differences are taken into account, the decays should occur at exactly the same rate. The finding will be published in Physical Review Letters this month (and has been on the arXiv1 pre-print server since June).

The discrepancy in decay rates, spotted at the collider’s LHCb experiment, is small and cannot be claimed as a discovery, because the anomaly may be merely a statistical fluctuation that could fade as more data are collected on B-meson decays. Particle physicists’ usual threshold for announcing a discovery is, in statistical parlance, 5 sigma; the LHCb signal has reached only 2.1 sigma.

But physicists are excited because the same anomaly has also been seen in results from two previous experiments: the ‘BaBar’ experiment at the SLAC National Accelerator Laboratory in Menlo Park, California, which reported it in 20122, and the ‘Belle’ experiment at Japan’s High Energy Accelerator Research Organization (KEK) in Tsukuba, which reported its latest results at a conference in May. LHCb's result is “bang on" the previous two, says Mitesh Patel, a physicist at Imperial College London who works on the experiment.

“A 2-sigma difference in a single measurement isn’t interesting by itself,” says Tara Shears, a particle physicist at the University of Liverpool, UK, and a member of the LHCb collaboration. “But a series of 2-sigma differences, found in different types of decay and independently by different people in a different experiment, become very intriguing indeed.”

Last year, LHCb found a similar bias, with a significance of 2.6 sigma, in decays of another type of B meson, this time a preference to decay into electrons rather than muons. What makes both measurements so exciting is that if the results prove real, they could point to the same underlying new physics, says Shears.

Both biases could potentially be explained, for example, by positing another kind of Higgs boson, which possesses charge and interacts differently with the various particles involved in the decays. Supersymmetry, a popular theory that seeks to extend the standard model, predicts such multiple Higgs bosons, although Patel says that, should the signal prove real, this is just one of many potential explanations.

Don Lincoln, a physicist at another LHC experiment called CMS, cautions that the findings are still most probably a statistical fluctuation or an improperly estimated uncertainty in the experiment. But seeing the discrepancy in multiple places should make people pay attention. “This is clearly something that must be studied in more detail,” he says.

The finding is based on data from the LHC’s first run, and physicists will have to wait for as long as a year to gather a similar amount of data from the collider’s second run, which began on 3 June. In the meantime, the LHCb team will examine other similar decays in existing data to see if further biases emerge, says Patel.

Physicists at CMS and the LHC experiment ATLAS are chasing their own intriguing results. They search for new particles directly (unlike LHCb, which tries to spot such particles by their indirect influence on known decays). Both CMS and ATLAS have seen low-significance ‘bumps’ within roughly the same mass region of their data — around 2 teraelectronvolts (TeV) — which could be caused by decays of a new particle, although it is not clear whether the findings are entirely compatible. The latest ATLAS paper, available on the arXiv, puts the signal’s statistical significance at 3.4 sigma.

Since the 1970s, experiments have time and again proved the accuracy of the standard model. Yet its failure to account for phenomena such as gravity and dark matter leads many physicists to think that it is merely an approximation of another description beneath. Patel says that he finds LHCb’s tantalizing results more convincing than those seen by its rival experiments, but would be happy to see either emerge as real as more data and analysis come in. “The standard model has stood for too long, and we’ll take its fall in any way it comes.”