With the discovery of the Higgs boson or something very like it under its belt, the world’s most powerful particle collider is ready to take a well-earned rest. The Large Hadron Collider (LHC) will shut down on 11 February ahead of around two years of upgrade work.

The break, known as LS1 for ‘long stop one’, is needed to correct several flaws in the original design of the collider, which is located underground at CERN, Europe’s particle-physics laboratory near Geneva in Switzerland. The fixes will allow the collider to almost double the energy at which it smashes protons together.

But there will be no long holiday for the thousands of physicists who depend on the LHC for their data. A bruising schedule of maintenance, upgrades and forward planning will keep the scientists who work on the collider’s detectors busy (see ‘Down time?’). Meanwhile, graduate students and postdocs will be poring over the past three years’ worth of data, refining their measurements of the Higgs-like particle discovered last summer and searching for any unusual signals. “It’s absolutely not time off,” says Dave Charlton, the deputy spokesman for ATLAS, the largest detector at the LHC. 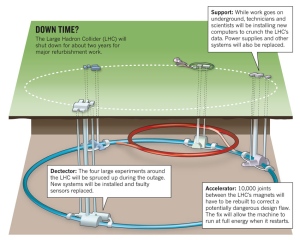 The LHC’s spectacular run got off to a shaky start in 2008. Shortly after operators fired it up, a single bad electrical connection caused coolant to vaporize, triggering an explosion that damaged an entire sector of the machine (see Nature 455, 436–437; 2008). Repairs took more than a year, and a subsequent review revealed potentially dangerous flaws in the original design, according to Steve Myers, CERN’s director for accelerators. The worst lay in a system of copper bars designed to draw current away from delicate superconducting cables in the event of an emergency shutdown or failure. The way in which the bars had been installed made them vulnerable to failure, Myers says.

To protect the machine from further disaster, the accelerator team made the decision to run the collider at half power until all 10,000 copper connections could be repaired and additional safety measures put in place. These repairs will begin almost immediately after the LHC switches off and will involve hundreds of people working double shifts, Myers says. The goal is to restart the collider at its full design energy of 14 teraelectronvolts by December 2014, but the complex schedule will be extraordinarily tight. “There’s no margin,” he says.

Meanwhile, crews responsible for the underground detectors will take advantage of their first full access to the machines in more than three years. “The experiments at the LHC are a lot like satellites”, says Paolo Guibellino, the spokesman for ALICE, a detector that collects data on collisions of heavy ions such as lead and gold.

The innards of the instruments — the largest of which is 46 metres long and 25 metres wide, half the size of Notre Dame cathedral in Paris — have been largely inaccessible since the LHC began running in 2009. Now, hard-hat-wearing scientists responsible for the machinery will pull them open to conduct repairs and upgrades. ALICE, for example, will get a new set of instruments designed to track electrons and photons flying from collisions.

Meanwhile, above ground, the team will replace banks of computers charged with capturing and analysing millions of events per second. The upgrades will help researchers to deal with the torrent of data expected when the machine roars to life. Similar work will be going on at ATLAS, says Charlton.

Other physicists will scrutinize the collisions that have already been detected. Last July, the teams working on ATLAS and another detector, the Compact Muon Solenoid (CMS), announced compelling evidence for the Higgs boson, a long-predicted particle and part of the proposed mechanism that endows other particles with mass (see Nature 487, 147–148; 2012). But the detectors have accumulated double the amount of data since then. “We’re past the discovery and now in the measurement phase,” Charlton says.

Teams will work into the summer to try to determine the ‘spin’ of the new particle (theory predicts 0). Researchers will also try to further nail down its mass and behaviour to see whether it is really the long-sought particle, or something else masquerading as a Higgs boson. Such a particle or particles would look much like the Higgs predicted by theorists and could do the job of helping to endow other particles with mass, but might differ in important ways that would hint at new physics beyond the current set of predictions.

Theorists, too, will be taking a second look at the data gathered so far, says John Ellis, a theoretical physicist at King’s College London. In their rush to discover the Higgs, experimentalists conducted only the easiest analyses. “The experiments went for the low-hanging fruit,” he says. There may be signals of something new hidden in the data.

Ellis plans to continue hunting through the data for signs of physics beyond the standard model. In particular, he hopes to turn up some hint of supersymmetry — a theory to which he has devoted years. Supersymmetry predicts a zoo of new particles, but none has so far appeared inside the detectors.

The teams will also spend the break looking towards the future. CMS spokesman Joe Incandela says the group is thinking about ways to make the most of the LHC’s new potency. “We have to start thinking already about replacement detectors for the early 2020s,” he says. Although the CMS will keep its magnets and metal superstructure, the plan is to eventually replace almost all of its electronic innards with new, state-of-the-art gear.

With the onset of the shutdown, the rhythm of the lab will change. Twenty-four-hour running shifts will come to an end, as will the frantic late-night analyses of the Higgs. But nobody is planning lengthy holidays, Incandela says. “Believe it or not, there’s not a lot of time to do everything we need to do.”