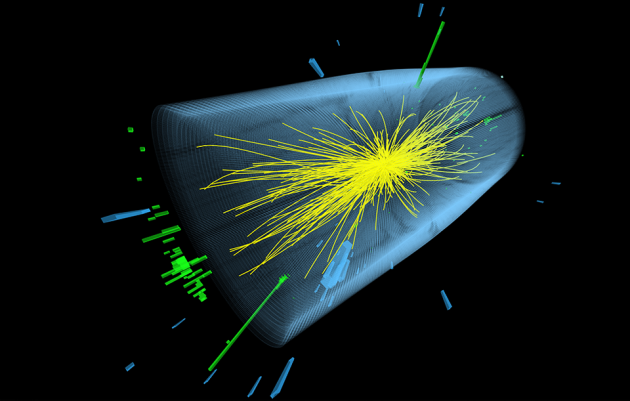 Pairs of photons (green) produced in LHC collisions suggest the existence of a boson with a mass of 750 gigaelectronvolts.

The two experiments that discovered the Higgs boson in 2012 have sensed an intriguing — if very preliminary — whiff of a possible new elementary particle. Both collaborations announced their observations on 15 December, as they released their first significant results since a major upgrade of the Large Hadron Collider (LHC) outside Geneva, Switzerland, was completed earlier this year.

The results largely match a rumour that has been circulating on social media and blogs for several days: that both the CMS and ATLAS detectors at the LHC have seen an unexpected excess of pairs of photons, together carrying around 750 gigaelectronvolts (GeV) of energy, in the debris of their proton–proton collisions. This could be a tell-tale sign of a new particle — also a boson, but not necessarily similar to the Higgs — decaying into two photons of equivalent energy. If so, the particle would be about four times more massive than the next heaviest particle discovered so far, the top quark, and six times more massive than the Higgs.

In their talks at CERN — the laboratory that hosts the LHC — the speakers for the two experiments took turns in surveying the results of the higher-energy, 'run 2' of experiments, which began in June and was suspended in early November. Both speakers left the results on photon pairs for the end of their talks.

In both cases, the statistical significances were very low. Marumi Kado of the Linear Accelerator Laboratory at the University of Paris-Sud said that his experiment, ATLAS, had detected about 40 more pairs of photons than would have been expected from the predictions of the standard model of particle physics. Jim Olsen of Princeton University in New Jersey reported that CMS saw merely ten. Neither team would have mentioned the excesses had the other experiment had not seen an almost identical hint.

“It is a little intriguing,” says ATLAS spokesperson Dave Charlton of the University of Birmingham, UK. “But it can happen by coincidence.”

In particle physics, statistical bumps such as this come and go all the time. If this one turns out to be a real particle, it would be “a total game-changer”, says Gian Francesco Giudice, a CERN theorist who is not a member of either ATLAS or CMS. Experimenters have spent decades validating the standard model, and the Higgs was the last missing piece in that picture. A much heavier particle would open an entire new chapter in the field, he says. “The Higgs boson pales in comparison, in terms of novelty.”

CMS spokesman Tiziano Camporesi says that his team does not know what to make of the data. The bump appeared as the team was searching for an unrelated particle, called a graviton.

Maxim Perelstein, a theoretical physicist at Cornell University in Ithaca, New York, says that although the 750 GeV boson is not one of the particles that LHC physicists have been searching for, theorists would not necessarily regard it as exotic. It could, for example, be a particle similar to the Higgs, only heavier, he says. “I would not find it a big surprise if this turns out to be real.”

Meanwhile, searches for particles predicted by supersymmetry, physicists' favourite extension of the standard model, continue to come up empty handed. To theoretical physicist Michael Peskin of the SLAC National Accelerator Laboratory in Menlo Park, California, the most relevant part of the talks concerned the failure to find a supersymmetric particle called a gluino in the range of masses up to 1,600 GeV (much farther than the 1,300-GeV limit of run 1). This pushes supersymmetry closer to the point at which many physicists might give up on it, Peskin says.

As for the photon pairs, Camporesi says that in 2016 the LHC should conclusively establish whether the bump was just another bump or evidence of a new particle. It will be a top priority for the next round of data taking, due to start in March, he says. “If there is an actual natural phenomenon behind these fluctuations, we will know.”

Charlton agrees. “We expect about ten times as much data next year, which should help resolve this question — but quite likely throw up new ones!”

An earlier version of this article stated, incorrectly, that the two photons have masses of about 750 GeV each and that the new particle would have a mass of 1,500 GeV.