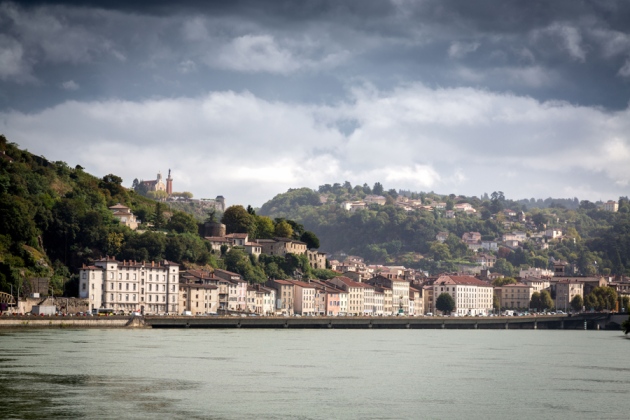 Vienne, by the river Rhone, where physicists today travelled to hold a workshop with Adlène Hicheur, who is under house arrest there.

Particle physicist Adlène Hicheur has not been able to attend scientific meetings since July, when he was mysteriously deported from Brazil and placed under house arrest in the small town of Vienne, in southeastern France. So, in a remarkable show of solidarity, his colleagues working at the Large Hadron Collider (LHC) have brought a workshop to him.

This morning, researchers from the LHCb experiment at Europe’s particle-physics laboratory CERN, near Geneva in Switzerland, jumped into shared cars and drove across the French border for the 2-hour journey to Vienne. Around 30 researchers are there: some took trains or flights to reach the town, and another 15 researchers, including some in China, the United States and Brazil, are giving talks by video link-ups.

“He will likely have to leave the only passion of his life — physics. This workshop in Vienne is also to tell him goodbye and wish him all the best for the continuation of his life.”

The one-day workshop being held at a business school near Vienne, entitled “Bc physics and semileptonic B decays in the LHC era”, includes a 30-minute afternoon break for Hicheur to report to the police station, under the terms of his house arrest. Hicheur himself is giving a talk on the properties of a kind of particle called a charmed B meson.

“Several of my colleagues and I organized the workshop to give concrete support to Adlène, and show him that a large fraction of our community is close to him,” says Vincenzo Vagnoni, physics coordinator of the LHCb and a researcher at Italy’s National Institute of Nuclear Physics in Bologna.

The Vienne workshop also serves as a poignant farewell to Hicheur, says Vagnoni. That is because Hicheur has found a way to have his house arrest lifted — but it requires that he move to Algeria, where it will be very difficult for him to establish a high-energy physics group. Hicheur is Franco-Algerian, and in October, he took the drastic step of informing the French government that he would renounce his French nationality, and asking to be allowed to leave the country. French authorities have agreed, provided that they are given clear details of how Hicheur intends to leave and that police escort him to the airport.

Hicheur says that he intends to fly out in the next two weeks. “He will likely have to leave the only passion of his life — physics. This workshop in Vienne is also to tell him goodbye and wish him all the best for the continuation of his life,” says Vagnoni.

In Brazil, Hicheur had been building a new life at the Federal University of Rio de Janeiro, after serving just over three years in prison in France without trial. In 2012, he was eventually convicted of an offence: allegedly plotting with al-Qaeda’s North African branch to carry out attacks on economic and military targets on French soil. Having served his jail time, he was released a few days later. Hicheur and his supporters, including scientific colleagues, have long argued that this conviction was a miscarriage of justice based on flimsy evidence. 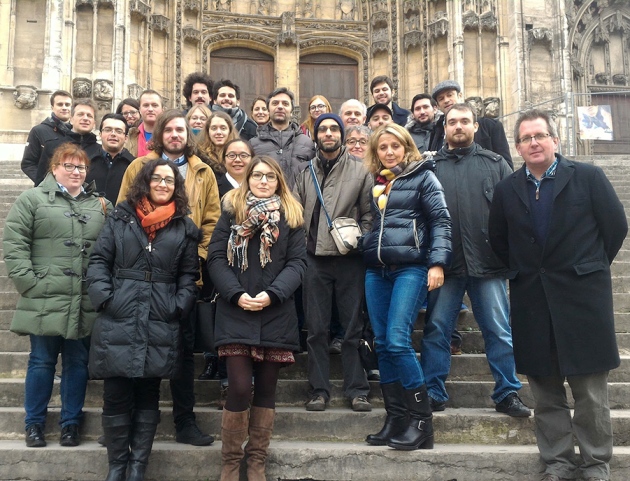 Physicists at the conference in Vienne: Hicheur is pictured in the centre with satchel and hat.

Hicheur’s July deportation from Rio de Janeiro — after which French authorities immediately placed him under house arrest — sparked protests from colleagues who say it was unjustified and arbitrary. "I think Adlène was extremely unlucky to fall into the alignment of three non-trivial things: the political crisis in Brazil, the upcoming Olympic Games and the state of emergency in France,” says Vagnoni.

Other researchers have supported Hicheur, too. Last month, organizers of the Latin American Symposium on High Energy Physics, in Antigua, Guatemala, arranged for Hicheur to give his plenary talk by video from his home in Vienne at around midnight his time, and to provide him with an opportunity to explain his personal situation to the audience.

The arrangement was an expression of solidarity from the community, says John Ellis, a CERN theoretical physicist at King’s College, London, who helped to organize the video link and introduced Hicheur's plenary. But it was also important for science that the Brazilian LHCb arm had chosen Hicheur to present their latest results on their behalf, he says. “All of what has happened is a tragedy for Adlène,” he adds.

“I am very touched by these gestures,” says Hicheur. “Beyond the all-important support of my family, the support of colleagues during difficult times has been fundamental.” He says that he intends to continue to pursue legal proceedings in Brazil challenging the legality of his deportation.

Hicheur does not yet have firm future plans for when he moves to Algeria. But he says that he intends to stay in science, perhaps initially teaching physics at a university in Algeria, or pursuing his interests in sustainable development, and perhaps resuming his particle-physics career elsewhere. He is stoic about his experiences. “I try to be positive even in the worst situations,” he says. “What happened was a rich experience — it’s an asset.”