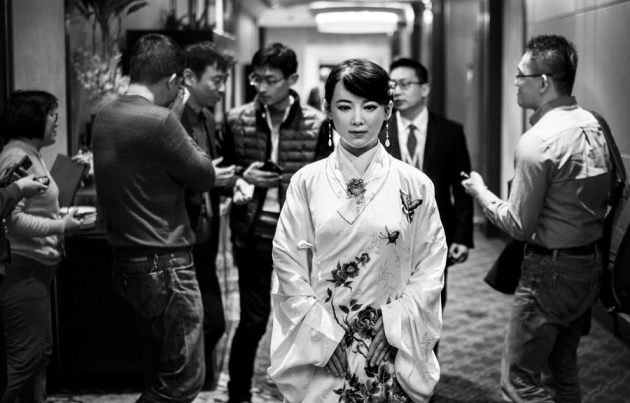 The humanoid robot Jia Jia (centre) was unveiled in Shanghai, China, in January.

Enabling robots to read human behaviour and to respond in appropriate ways is a burgeoning area of research. As is the study of how humans will react to these potentially clever, personalized and ever-available companions. But there is another aspect of human–robot relationships that is rarely mentioned, and it’s one on which robots could have just as great an impact as any other. Sex.

That reticence changed, at least in the United Kingdom, last week. A flurry of press reports followed the publication of a consultation report (see go.nature.com/2u4578x) by the Foundation for Responsible Robotics that aims to encourage public debate about sex robots. Technological developments in soft robotics and artificial intelligence put these machines on the horizon, at least in basic form, the authors of the report suggest. And the impact of sex robots could differ markedly from that of conventional sex aids. The fact that such bots are most likely to be anthropomorphic, female and inspired by pornography prompts legitimate fears. Even if few people are talking about this topic, the report points out that doll brothels already exist in Asia, and tentative evidence from surveys suggests that there could be a market for both sex robots and robot brothels.

On reading these news reports, it’s tempting for scientists to question the priorities of the news cycle. But there is a serious point to make.

The sex industry is not often written about in these pages, but no one can claim that it is irrelevant to people’s lives. Worldwide, the sex-technology market is worth a reported US$30 billion, and although accurate figures for the pornography industry do not exist, revenue is thought to reach tens of billions of dollars a year. (Meanwhile, the annual revenue of the academic publishing market in 2013 was around $25 billion.)

Just four companies, all located in the United States, currently produce sex robots. No one knows how many people own one. They are still more doll than robot, but Matt McMullan, chief executive of one of the bot manufacturers, Abyss Creations, is focusing his company’s efforts on interactivity. As artificial intelligence and robotics improve, advances will filter into robots designed for sex. And bonds will form, even though unrequited. (Soldiers have been shown to develop emotional attachments to bomb-disposal robots.)

Although a handful of researchers have looked seriously at the issues surrounding relationships with robots, research into the social, legal and moral implications is scarce. Academic research on sex-related technology is even scarcer, and the work that has been done so far — including a study by Stanford University in California that revealed that people get physiologically aroused when touching a robot in places that they would find sensitive themselves — is plagued by caveats and differing interpretations. The academic world has largely looked on the topic as both trivial and sensational. A fledgling academic conference — the International Congress on Love and Sex with Robots — had to be moved from City, University of London, to neighbouring Goldsmiths after the original host deemed its topic to be “uncomfortable”.

But the difficulty of the work, and the existence of the taboo, does not mean there is a lack of legitimate scientific questions to ask. As well as the impact of human–robot interactions, academics could examine pressing issues that surround the privacy of sex technology imbued with artificial intelligence. Some smart sex toys can be hacked, and others that collect data with the aim of personalization have failed to guarantee anonymity.

Right now the world of sex robots, and technology more widely, is driven by white, middle-aged men. Improving the gender diversity of those involved in the research and development of sex technology could dampen possible harm such as objectification. And the potential benefits could be boosted by making products that might appeal to more people.

The foundation’s report is correct to argue that society needs to decide how best to deal with this growing industry. Academics must be part of this conversation. And they should carry out the research to make such discussions evidence based.

The original photo caption did not make it clear that the picture shows the lifelike robot Jia Jia. It has now been updated.