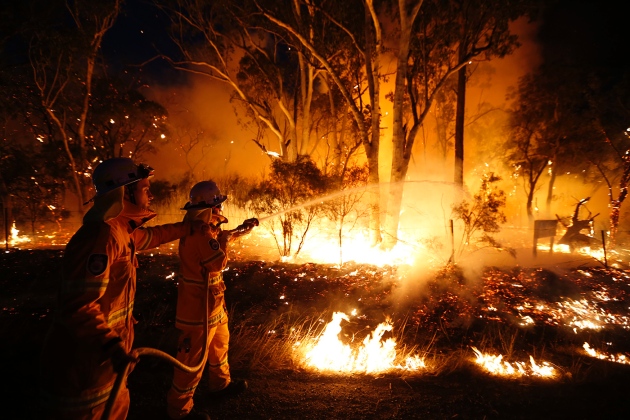 Climate forecasts indicate that Australia will face an increased risk of severe droughts and bush fires.

In a world-first case, an Australian court will next month begin hearing from shareholders who have sued a bank for failing to disclose its vulnerability to climate change.

The case highlights the fact that financial institutions around the world have been slow to acknowledge the risk that climate change poses to investments in infrastructure, agriculture and property. But researchers say the lawsuit also shows that Australia and many other countries are currently unable to forecast the financial risks of climate change.

Shareholders Guy and Kim Abrahams filed the lawsuit on 8 August against the Commonwealth Bank of Australia, saying that the institution’s 2016 directors’ report did not adequately inform investors of climate-change risks. Their suit also seeks an injunction to stop the bank from making the same omissions in future annual reports.

“These are exactly the types of questions that need a lot of research.”

Climate scientist Andy Pitman at the Centre of Excellence for Climate System Science in Sydney, Australia, says that researchers have been warning companies and governments for years about the need to invest in climate modelling and the related field of climate services, which provides forecasts and other information to public and private users. He says that it would take substantial investment and five to ten years of work for his team to provide banks with the climate information they need.

To be useful, he says, the forecasts would need to be on a time scale that is specific to a business or government’s climate vulnerabilities, such as a period of months to years, or on small spatial scales, such as the size of a farmer’s field. “That’s hugely challenging,” he says. “It’s the difference between building a car that travels around Sydney and building one that wins a Formula One Grand Prix.”

In theory, it should be possible to make such forecasts, but “it’s a huge undertaking to actually do it”, says Pitman; and it would require high-performance supercomputers generating massive amounts of data.

No country can yet produce climate forecasts on the scales and with the accuracy needed for detailed planning, says Simon Mason, a climate scientist at Columbia University’s International Research Institute for Climate and Society in Palisades, New York. Even the best forecasts are highly uncertain, which makes it difficult to use them for planning, he says.

For instance, if a farmer’s bank wants to know the probability that the farm might experience drought, a 10-year projection might suggest a 60% chance of more frequent droughts, says Mason. But that doesn’t indicate how severe the droughts might be or whether they will lead to crop failures, he says. “These are exactly the types of questions that need a lot of research.”

But Jacqueline Peel, who specializes in climate-change law at the University of Melbourne, Australia, says that companies are likely to face more lawsuits like the Australian one, meaning that they won’t have time to wait for fine-scale, tailored models. She says that there is already sufficient information on future warming scenarios for a business to disclose its vulnerabilities.

In Australia, researchers say that budget cuts haven’t helped. A report released earlier this month by the Australian Academy of Science identified major gaps in climate research and climate services. The report found that Australia needs an additional 77 climate scientists, including 33 in modelling and 12 in climate services. The academy commissioned the report after the Australian national science agency, the Commonwealth Scientific and Industrial Research Organisation (CSIRO), axed about 30 climate-science positions in 2016. CSIRO says it later added back 31 posts.

“There is a pressing need to improve projections of extreme-weather events to meet the demand for adaptation planning and disaster risk management,” the report said.

The situation is better in Germany, the Netherlands and the United Kingdom, which have well-established, government-funded systems that provide climate information. But in the United States, researchers say that climate services are fragmented and struggle to meet the needs of governments or private-sector decision-makers. The Obama administration tried to launch a climate services division, but the US Congress blocked that effort.

“We haven’t invested as much in climate services in time scales from several weeks to decades in the US,” says John Furlow, who works on climate change and development at Columbia.