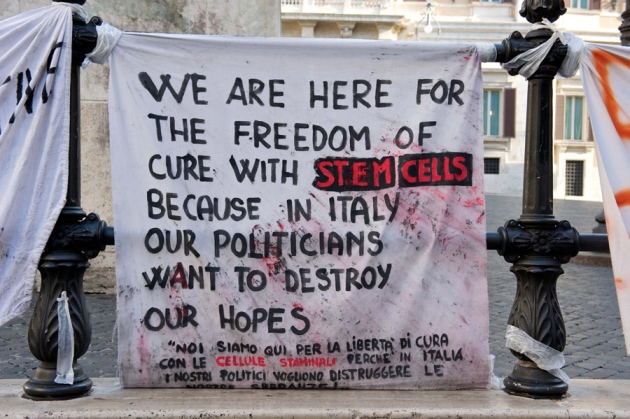 A series of damning documents seen by Nature expose deep concerns over the safety and efficacy of the controversial stem-cell therapy promoted by Italy’s Stamina Foundation. The leaked papers reveal the true nature of the processes involved, long withheld by Stamina’s president, Davide Vannoni. Other disclosures show that the successes claimed by Stamina for its treatments have been over-stated. And, in an unexpected twist, top Italian scientists are dissociating themselves from an influential Miami-based clinician over his apparent support for the foundation.

Stamina, based in Brescia, claims that it successfully treated more than 80 patients, mostly children, for a wide range of conditions, from Parkinson’s disease to muscular dystrophy, before the health authorities halted its operations in August 2012. A clinical trial to assess the treatment formally was approved by the Italian government last May, and an expert committee was convened by the health ministry to study Stamina’s method and to recommend which illnesses the trial should target.

Stamina says that its technique involves extracting mesenchymal stem cells from a patient’s bone marrow, culturing them so that they turn into nerve cells, and then injecting them back into the same patient. But full details of the method have never been revealed, and Vannoni provided the full protocol to the expert committee only in August.

In October, the committee’s report prompted health minister Beatrice Lorenzin to halt plans for the clinical trial. That led to public protests in support of Stamina, and, after an appeal by Vannoni, a court ruled in early December that the expert committee was unlawfully biased. Some members had previously expressed negative opinions of the method, the ruling said. As a result, Lorenzin appointed a new committee on 28 December, reopening the possibility of a clinical trial.

Stamina’s protocol, together with the original committee’s report, was leaked to the press on 20 December (Nature has also been shown transcripts of the committee’s deliberations). The leaked papers reveal that the original expert committee identified serious flaws and omissions in Stamina’s clinical protocol. It did not apply legally required Good Manufacturing Practice standards, the committee says. The protocol exposed an apparent ignorance of stem-cell biology and relevant clinical expertise, the report argues, as well as flawed methods and therapeutic rationale (see ‘Protocol opinion’).

What the expert committee said on Stamina’s methods.

The report of the original expert committee tasked with looking at Stamina’s clinical protocol includes the following opinions:

The protocol contains no method for screening for pathogens such as prions or viruses, even though the culture medium used could contain them.

The method it describes for producing mesenchymal stem cells, say the experts, would generate a mixture of different cell types that could include blood-cell precursors and bone fragments.

The method it describes for checking the biological identity of the cells uses inappropriate cell-surface markers and no functional assay. And the protocol does not include a method for making mesenchymal stem cells differentiate into neural cells, the rationale Stamina provided, along with the protocol, in support of the clinical value of the method in three disorders it proposed that the clinical trials address.

Even if the Stamina method did generate the desired cells, the experts’ report notes, there would be too few of them for the treatments Stamina proposes. The experts also criticized an ‘emergency’ measure in the protocol that would culture a patient’s sample once more just before injection if at the last minute numbers of stem cells appeared sparse. This would mean that treatments across patients in the clinical trial would not be standardized, they say.

The clinical rationales provided by Stamina also contain conceptual errors, the experts say, as it is broadly accepted by the scientific community that the stem cells can differentiate into only bone, fat or cartilage. Moreover, the committee notes that sections of the protocol are copied from Wikipedia.

A week after the leaks, the health ministry revealed that the condition of 36 patients treated with Stamina’s stem-cell therapy had not improved, contrary to Vannoni’s claims that more patients had shown improvement.

The leaked documents also convey the original committee members’ disquiet over the unusually strict confidentiality agreement that they had to sign. This prevented them from ever divulging details of the protocol — and each committee member received an individualized copy of the method from Stamina to aid in the identification of any leak. The committee argued that such secrecy was unnecessary because no intellectual property or commercial interests were involved. Vannoni insists that Stamina will not make a profit. He has also said that, in the opinion of the court, the committee “had neither the right nor competence” to comment on the protocol.

Other events have further dented Stamina’s credibility. Leading researchers on the scientific advisory boards of two independent stem-cell initiatives headed by clinician Camillo Ricordi have resigned in protest over the apparent public support offered to Stamina by Ricordi. Ricordi, who works on diabetes at the University of Miami in Florida, has in the past called Stamina’s method “safe” and “promising”.

On 23 December, Carlo Croce, a cancer researcher at the Ohio State University in Columbus, resigned from the scientific committee of one of the initiatives, the Ri.MED Foundation, a publicly funded regenerative-medicine institute being built in Palermo, Italy. Croce has called for Ricordi to be removed as Ri.MED’s president. Other committee members told Nature that they are also considering resigning from the Ri.MED committee.

And at the end of December, cell biologist Carlo Redi of the University of Pavia, Italy, stem-cell biologist Giulio Cossu at University College London and Francesca Pasinelli, director-general of the Italian grant-giving charity Telethon, all resigned from the Cure Alliance, a lobby group for speeding up translational medicine that Ricordi launched.

The scientists who resigned say that they were dismayed by Ricordi’s insistence that the value of Stamina’s therapy had not yet been proved or disproved, as well as his offer to test and possibly improve it in his Miami facilities.

Ricordi has told Nature that he is “not at all in favour of Stamina, but in favour of a verification process that is in the interest of all”. He also points out that new members have joined the committees of the two initiatives. In response to the resignations, Vannoni told Nature: “I think that if a scientist resigns from a research centre because a colleague of his decides to study a new method, he/she has not got a correct approach to science.”

Ricordi has featured regularly in the long battle over Stamina’s methods. For example, at the July 2013 meeting of the Congress of the Cell Transplant Society in Milan, he announced that he had seen the then-secret Stamina protocol and witnessed how patients in Brescia had improved. In a press statement that day, he said that he believed it to be a “safe” procedure. “The results and data I was able to see appeared promising,” he said.

On 7 January, he added that: “If someone has a protocol that results in clinical benefits — to be validated — I wouldn’t question their level of stem-cell biology knowledge.” He also said he had seen certificates confirming that Stamina’s cell samples were sterile. But Paolo Bianco, an expert in mesenchymal stem cells from the University of Rome La Sapienza, notes that these certificates do not cover the presence of prions or viruses in the sample.

Ricordi backs a controversial proposal that cell therapies should not be regulated as medicines, as US and European regulators insist, but as transplants. He argues that because transplants are not subject to strict regulation, novel stem-cell therapies could be introduced more quickly.

As editor-in-chief, Ricordi launched the official journal of the Cure Alliance, CellR4, in 2013. He has written editorials in the journal attacking critics of his views on transplant regulation, including Bianco and Nature.

Ricordi began lobbying the former Italian health minister Renato Balduzzi over his views on transplants at the end of March last year. On 16 April, Balduzzi nominated him as president of Ri.MED. And in an e-mail to Nature on 2 January this year, Ricordi said that Lorenzin — the current health minister — “has recently asked me to help in resetting regulation for cellular therapies”. But Lorenzin told Nature that she had met Ricordi only once at a social occasion and that they had discussed a different topic.

In December, Ricordi reached an agreement with Stamina to begin testing its patients’ cell samples in his facilities in Miami. He denies being in favour of Stamina, but says that he is an advocate of patients who need to know whether or not the treatment works. “Testing is the only way to bring clarity,” he says.

But Ruggero De Maria, science director of the Regina Elena National Tumour Institute in Rome, says: “Tests on samples have already been carried out independently at the University of Modena in Italy. I feel offended when I see Ricordi praising Stamina and attacking experts.”

Ricordi told Nature that “a mud machine is being orchestrated” against him. Vannoni says that Ricordi is objective and open to new ideas but is not “supportive” of him.