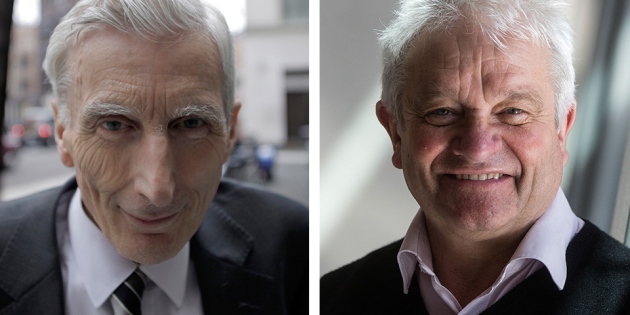 Martin Rees (left) and Paul Nurse disagree over the value of reforms to UK research and higher education.

Plans by the UK government to shake up how the country’s research is funded are causing dissent among leading British scientists.

At a press briefing held on 13 October at London’s Science Media Centre, some of the country’s most eminent researchers clashed over the draft laws, which would bring together several funding bodies — including the seven research councils — into one central funder called United Kingdom Research and Innovation (UKRI).

“This is a controversial and unnecessary and probably, in the long term, damaging change,” said Martin Rees, an astronomer at the University of Cambridge and a former president of the Royal Society in London. “The upheaval involved in setting up UKRI will do more harm than good.”

Sitting next to Rees was an equally prominent figure arguing in favour of the change: Paul Nurse, who leads London’s Francis Crick Institute and is also a former president of the Royal Society.

Nurse led a review of the existing system that formed the basis for the government’s proposals, which were introduced to Parliament on 19 May as the Higher Education and Research Bill. He argues that the bill could strengthen the voice of science in government and address the “pitifully low” levels of science funding compared with in other developed nations.

“The present system has not been strong enough in its interactions with government,” he said. “Properly set up, UKRI can deliver that.”

“I completely agree we need a much stronger voice for science,” said Rees. But with a new government and problems caused by the United Kingdom’s vote to leave the European Union, “the last thing we need is a major overhaul”.

A major talking point of the reform bill — and the trigger for the press briefing — is the concern that it may open the door to more government interference in science funding and higher education.

The bill would remove some of the legal instruments that have given the research councils formal autonomy over what they fund, and gives ministers the right to create and dissolve areas of research funding. It would also overhauls university governance, creating a new governmental body to regulate universities and allowing ministers to suggest courses for universities to teach.

In an editorial published on 4 October, Nature argued that the moves “will upend globally accepted norms that protect independence and self-determination in science and higher education”. Nurse, however, said at the press conference that the Nature editorial was “alarmist” and “lazy thinking”.

And another eminent UK scientist — John Krebs, a zoologist at the University of Oxford, UK, and president of the British Science Association — warned against adopting the bill in an article. “It is by no means obvious that it will improve an already excellent system of universities and research. It could do substantial harm,” he wrote.

Changes to the autonomy of universities would be “in effect a nationalization of our university system”, Stephen Curry, a structural biologist at Imperial College London, told journalists at the press conference. The bill, he said, is “bad law” and must be amended.

Researchers expect the bill to pass swiftly through the House of Commons. But many scientists hope that it will be scrutinized more carefully and amended in the House of Lords.

Ottoline Leyser, a plant biologist who is the director of the University of Cambridge’s Sainsbury Laboratory, said that there is “widespread agreement” in academia that the bill is a “curate’s egg” — a mix of good and bad parts. But the good bits are worth keeping, she said.